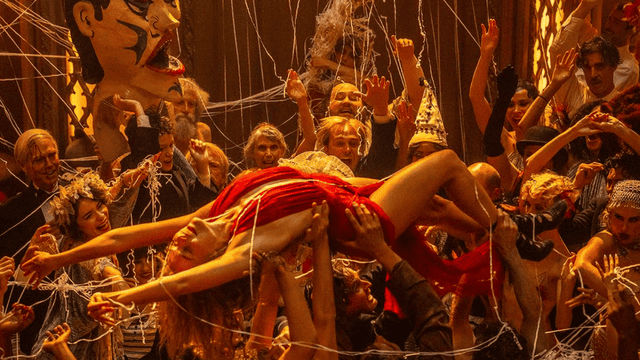 If you have not watched the Babylon movie and before watching it you want the read about the Babylon Review, then you have come to the right place.

In case you haven’t heard, Damien Chazelle, known for his work on Whiplash and La La Land, has a new movie out called Babylon, starring Diego Calva, Margot Robbie, and Brad Pitt.

Damien Chazelle, the director, has described Babylon as “a hate letter to Hollywood and a love letter to cinema,” yet his chaotic, spectacular epic defies that oversimplified notion.

Babylon hints at a deeper truth: the film industry’s raw, self-destructive, narcissistic impulses and its glorious, magical results have always been diametrically opposed parts of the same whole.

It is set in the early days of cinema when talking pictures were a startling phenomenon and Hollywood was still being created. In this post, we will give information About the Babylon Movie Review Whether it is good or not. Read the entire article for all details.

Babylon Review: Watch it or Skip It!

Does it all add up? That’s a hard question to answer. Chazelle says that this version of landing on the moon is worth the trip, but to get there he puts his characters and the audience through so much misery that it’s hard to believe him.

“Babylon” has a lot of great scenes, performances, and technical parts, but Chazelle doesn’t seem to have the magic touch he needs to bring them all together in an honest way. There’s something to be said for a movie that doesn’t try to hide anything, but by the end of this one, I felt just as manipulated and fooled as the outsiders who get eaten up by the Hollywood machine.

One could say that was on purpose because it’s rare for a Hollywood movie to make you feel bad, but that’s the difference between pulling back the curtain and rubbing your face in elephant poop.

Linus Sandgren’s fluid camerawork gives the movie a lot of its momentum. His shots are never flashy, but they are always moving. The score by Justin Hurwitz might be the best of the year. It has recurring themes for the characters, which gives the whole thing a more operatic feel, which fits the dark tone and sad endings of the story.

The production design walks that fine line between being real and being bigger than life. The way the stories are cut together sometimes seems to get away from the great editor Tom Cross, but that’s more because Chazelle’s script isn’t always clear than anything the editor did.

Concerning that script. “Babylon” shows if a movie can be more than the sum of its beautiful parts. There’s no denying that this film has a great score, a talented cast, and expert cinematography. Still, there are parts of “Babylon” that feel empty from the start, and they feel even more empty as Chazelle tries to sneak in some manipulative lessons in the last scenes.

A movie like “Babylon” can be aggressively mean and disrespectful, but I thought it was hypocritical when, in the last scenes, it tried to play the “wasn’t it all worth it?” card, which everyone knows is coming.

Fans of this movie seem to love this ending, but I thought it was the fakest thing Chazelle had ever done. Watch the trailer below:

Everyone considers a show’s rating while making a decision. The ratings are usually the best indicator of whether or not a show will be renewed for a second season. Your success odds improve proportionally to your rank. The show is well-liked by viewers 62% approval on Rotten Tomatoes.