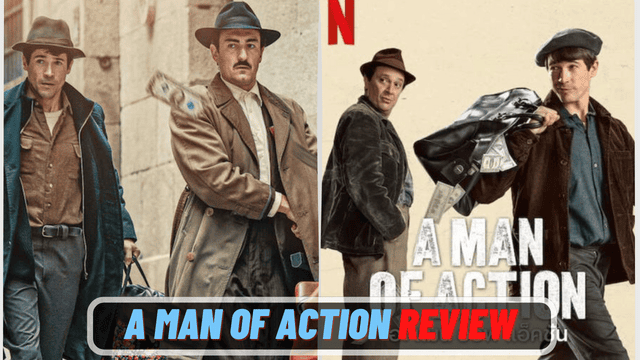 A Man of Action is a crime drama from Spain that came out on Netflix on November 30th. It was written by Patxi Amezcua, and Javier Ruiz Caldera is in charge of directing it. The movie is made by Ikiru Films, La Pulga y el Elefante, and La Terraza Films. It is based on the life of Lucio Urtubia in a loose way.

A Man of Action: Official Trailer

A Man of Action: Story

Spanish bank hater Lucio Urtubia relocates to Paris, where he becomes acquainted with the anarchist movement. Lucio becomes a fervent advocate for anarchism after meeting and bonding with other like-minded individuals while working as a bricklayer.

Soon after, he joins Quico Sabaté in a series of bank robberies, using a portion of the proceeds to fund the uprising. But as the police close in, he is forced to abandon Sabaté and form a new, smaller group intent on looting banks.

Lucio starts robbing banks using counterfeit U.S. dollars with the help of Arturiano, Patrick, and Petite Jeanne. Anne, his new girlfriend, is a free thinker and smart woman who will be working alongside him.

Later, the police catch up with him, and he spends time in jail, where he saves his life of Charlie and becomes friends with him. After being set free, he abandons his anarchist ideals in favor of his family, which now includes his wife Anne and daughter Juliette.

However, eight years later, the growing popularity of traveler’s checks inspires Lucio to plan another expropriation operation, this time with the intention of assisting other anarchists. Starting with his anarchist friends, he starts forging checks and quickly becomes a local celebrity.

Executives at City Bank are worried about the situation in Paris, so they dispatched their man there to fix it. Lucio and his cronies are caught just before making one final attempt at a huge score, but everyone but Lucio is released on bail soon afterward.

In the final scene of “A Man of Action,” Lucio makes a deal with City Bank that allows him to have all charges against him dropped, donate a large sum of money to the anarchist movement, and reconcile with his family.

A Man of Action: Performances

The lead actors give excellent performances, but overall, “A Man of Action” doesn’t particularly stand out for its acting prowess.

A Man of Action: Positives

A Man of Action is a quick-paced retelling of actual events that happened between the 1940s and the 1970s. The storytelling is brief, which makes for an enjoyable binge. The film’s commendable pacing is aided by quick editing and a few innovative early scenes.

A Man of Action: Negatives

The film doesn’t feel like a grand retelling of events that should have felt much more cinematic, despite the story’s substantial real-life pedigree.

The movie has the same trite color scheme that almost every other contemporary film has, which can temporarily distract from the story and feel out of place with the otherwise period-specific environment of the scenes.

A Man of Action: Verdict

The people featured in A Man of Action actually occurred in the life of Lucio Urtubia. He was the one to initiate contact with the lawless anarchist. A man tries to steal millions of dollars by forging checks at a major bank, setting off a manhunt as authorities try to catch him before he can escape with the counterfeited cash.

Like “Catch Me If You Can,” this film takes us on a journey to see how much money one man can steal before he is caught. It all follows the same pattern and leads to the same destination. Making a notorious criminal into a role model thanks to his mastery of the criminal justice system. Nothing new here, but it does drive home the significance of his actions in the narrative. Together, his team and he made history, and his name will live on in infamy.

A Man of Action: Summing Up

The film lives up to its title, ‘Un hombre de acción,’ as the character truly takes charge of the action for whatever he imagines. The first scene, in which he plays a game of run and chase, appears to be a resolution that will come at the end. However, it appears as a good twist as the story progresses and lays the groundwork for Urtubia’s future actions.

However, with the story we have, the script and production could have been much larger than they are. There are powerful moments, but due to a lack of dialogue and inconsistent direction, they lack depth and the end result falls flat.