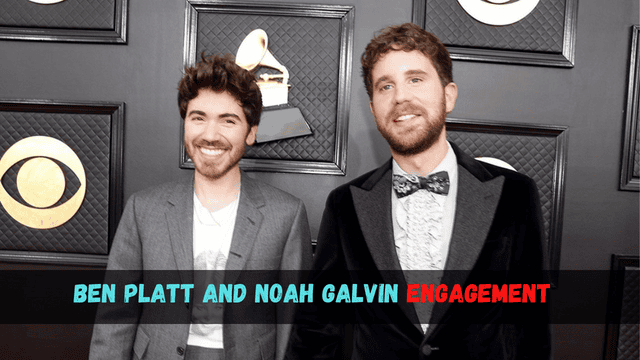 Ben Platt, who played Benji in Pitch Perfect, is getting married! Over the weekend, he asked his boyfriend of two years, Noah Galvin, to marry him. Both Ben and Noah posted photos of the moment on Instagram, and Ben wrote in the caption of his photo, “He agreed to hang out forever.”

While Noah wrote, “I said yee-haw and then cried for like 7 hours.” Some of their famous friends, like Ariana Grande, Kiernan Shipka, and Elizabeth Banks, congratulated them in the comments. Before they began dating in 2020, they had known each other for a long time.

When Did Ben Platt and Noah Galvin Start Dating?

Platt won a Tony for playing the title role in the Broadway musical Dear Evan Hansen. In May 2020, he and Galvin, who took over the role after him, said they were dating. Platt said he had been dating Galvin for a year and a half when he was on The Kelly Clarkson Show in June 2021.

He told People at the time, “We had been friends for five years, and right before the pandemic, we finally decided to give it a real try.” “We kind of skated around it for a long time.” In an interview with The New York Times in October, Platt confirmed that he had known Galvin for “three or four years” before he took over as Evan Hansen. “Dear Evan Hansen is said to be how we met, but it’s not true,” he said.

Read More: Miley Cyrus Dating: Does She Have a Serious Relationship?

How did Ben Platt and Noah Galvin Meet?

People say that they met when Galvin took over for Platt in Dear Evan Hansen on Broadway. Galvin was the first replacement for Platt. Since then, Platt has played the same role in the movie version of the Pasek and Paul musical and in the movies The Politician and The People We Hate at the Wedding. He has also returned to the stage in a gala production of Jason Robert Brown’s Parade at New York City Center.

Before Booksmart, The Other Two, and The Good Doctor, Galvin was in The Real O’Neals. After he was in Dear Evan Hansen on stage, Galvin played Ogie in Waitress on Broadway. Galvin and Platt wrote the script for the upcoming movie Theatre Camp with Molly Gordon and Nick Lieberman. Both Platt and Galvin will be in the movie.

Read More: Kanye West Dating: Whom Did He Date After Kim Kardashian?

What are Ben Platt and Noah Galvin Doing Now?

Galvin was the star of the ABC comedy The Real O’Neals, and he is currently playing Asher Wolke on The Good Doctor. Platt, on the other hand, played the lead role in the Netflix comedy-drama The Politician and made guest appearances on Will & Grace and The Premise. In the comedy film The People We Hate at the Wedding, which started streaming on Prime Video on November 18, he stars with Kristen Bell, Allison Janney, and Cynthia Addai-Robinson.

Let’s Have a Look at Who Ben Platt Really Is?

Benjamin Schiff Platt is an actor, singer, and songwriter from the United States. As a child, he started acting in musical theatre. He was in productions of The Sound of Music and The Book of Mormon. He became famous for playing the title role in the Broadway musical Dear Evan Hansen, which is about a boy coming of age.

Platt was born in Los Angeles. He was the fourth of Julie (Beren) and Marc Platt’s five children. His father is a producer for movies, TV, and theatre. Some of the movies and shows he has worked on are Legally Blonde, Into the Woods, La La Land, Mary Poppins Returns, and the musical Wicked. He has two sisters and two brothers. Actor Jonah Platt is one of his brothers. His family and he are Jews.

Read More: Tom Holland and Zendaya Dating: When Did It Start and Are They Still Together?

Noah Egidi Galvin is an actor and singer who was born in the U.S. He is best known for his roles as Dr. Asher Wolke in the TV show The Good Doctor and Kenny O’Neal in the ABC sitcom The Real O’Neals. He later played the title character in the Broadway musical Dear Evan Hansen.

Galvin was born in Katonah, New York, and grew up there. Yoke Lore, who plays many instruments, is one of Galvin’s two siblings. His father is Irish and Italian and Catholic, and his mother, Abbie, is Jewish. He was raised “both Jewish and Catholic,” going to CCD, Hebrew School, and church, and has said he is Jewish.

How Old Was Johnny Depp in Edward Scissorhands? Let’s Explore It!