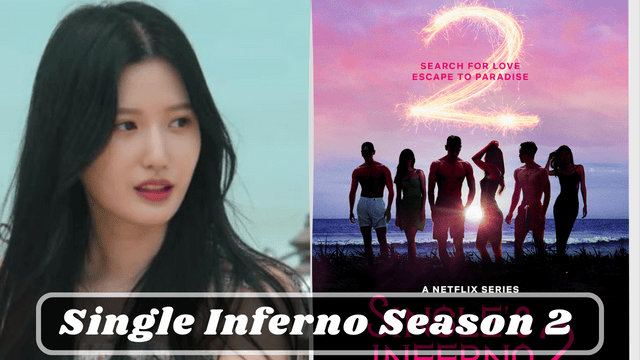 Single Inferno Season 2: Single Inferno is Netflix’s first original South Korean reality dating game show. Its premise is simple: 12 single people (6 men and 6 women) are stuck on a deserted island together. The contestants are only given a few resources, and the only way they can leave the island and go to a luxury hotel called “Paradise” is if they go on romantic date nights together. In the “Paradise” hotel, the 12 single people can only talk about their age and what they do for a living.

The reality show was a huge hit all over the world because Netflix users rushed to watch the romantic and friendly interactions between the South Korean participants, many of whom are business owners, fitness models, and social media stars.

The show’s first season had two episodes a week, and each one lasted between 57 and 71 minutes. Now that all eight episodes are available on Netflix, many people have watched them all at once to find out who ends up with who and who stays single.

Those who can’t get enough of Single’s Inferno are probably wondering if there will be a second season. Will Season 2 happen? Here’s what you need to know about Single’s Inferno’s future.

When Netflix decided to renew the show, they made a video announcement:

According to Netflix, Season 2 of Single’s Inferno will premiere on Netflix on December 13, 2022, as teased in a new trailer released on November 29.

Netflix users reportedly watched the dating show for over 17 million hours, so it’s no surprise that Singles’ Inferno will be back for a second season. The streaming giant has already found huge success with other reality shows like “Love is Blind,” “The Circle,” and “Too Hot to Handle.”

Netflix Korea held an entertainment meeting event in Seoul in July 2022, as reported by Kbizoom. Reed Hastings, Co-CEO of Netflix, appeared in a video message and said, “I came to Korea two weeks earlier, and it’s a shame that I couldn’t be with you. Nonetheless, I’m thrilled to share Netflix’s offerings with my audience.

The cast of Single’s Inferno Season 2

Single Inferno Season 2: Single Singles like Kang So-Yeon, An Yea-Won, and  Oh Jin-Taek were on the first season of Inferno. Kim Jun-Sik, Kim Su-Min, Moon Se-Hoon, Song Ji-a, Shin Ji-Yeon, Kim Hyeon-Joong, Seong Min-Ji, Choi Si-Hun, and Cha Hyun-Seong. But if Season 2 is confirmed, it’s likely that these South Korean contestants won’t be back. That’s because reality shows like this need new contestants every season to keep the format entertaining.

Even though the people from Season 1 might not come back for another round, Lee Da-hee, Hong Jin-Kyung, and Hanhae might because they are panelists who comment on and watch how the participants act. If Netflix gives Season 2 the go-ahead, you can expect to see a lot of entrepreneurs and social media stars.

Transformers:Rise of the Beasts Trailer Show Return of “Optimus Prime”!