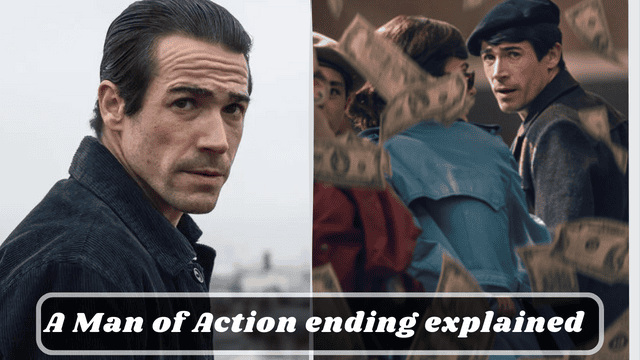 A Man of Action Ending Explained: Netflix has the Spanish crime drama movie A Man of Action. Javier Ruiz Caldera is the film’s director, and Patxi Amezcua wrote the screenplay. Anarchist targets one of the largest banks in the world with a cunning counterfeiting operation, inspired by the life of Lucio Urtubia.

Official Trailer of “A Man Of Action”

A Man Of Action Plot

A Man of Action Ending Explained: In the opening scene of “A Man of Action,” which takes place in 1962, a couple is hiding out at an airport from the police while carrying a bag full of cash. They take out stacks of cash and toss them in the air to distract the police who have cornered them from all sides.

The film flashes back twenty years to explore Lucio Urtubia’s troubled upbringing. Lucio, as a young man, tries to get a loan to treat his sick father, but the bank refuses to help him. As a result, Lucio must watch as his father dies. 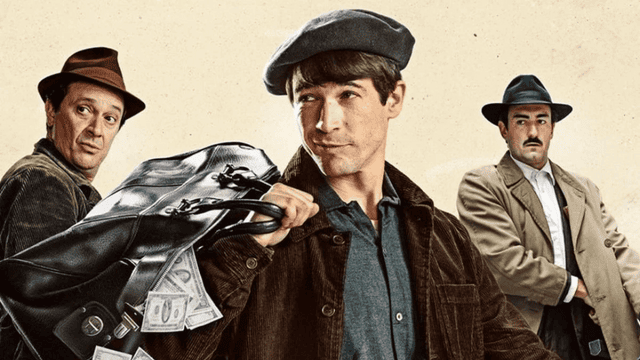 While his sister is off to Paris to begin a new life, he must first complete his military service. Ten years later, after evading the military, Lucio finds work as a construction worker in Paris.

Soon enough, Lucio realizes that the local anarchist movement shares many of his anti-order, anti-authoritarian ideals. After a short time, he becomes a full-fledged anarchist and starts passing out flyers to recruit others.

The union, however, cannot effectively return this information to the proper authorities. When Lucio meets well-known anarchist Quico Sabaté, he is persuaded to take his anarchist movement in a more direct direction by robbing banks.

Although Lucio was hesitant at first, he eventually agreed, and the pair successfully pulled off their first robbery. Eventually, they streamline the procedure, and the police close in on his trail.

Sabaté, who has been helping Lucio stop the robberies, is leaving for Spain to fight the fascists and will likely die there. At the same time, Lucio and his associates Arturiano, Petite Jeanne, and his brother-in-law Patrick form a breakaway anarchist group (a printer).

What is Lucio’s plan?

A Man of Action Ending Explained: Lucio devises a clever scheme to counterfeit Traveler’s Cheques after an earlier scheme involving fake currency. Lucio intends to hit the banks hard after successfully tricking the Teller. The group decides to attack at 12 p.m. simultaneously and pick off one bank at a time. In this manner, the Tellers won’t notice anything amiss when they check the serial numbers.

When the checks eventually reach HQ and they discover they were conned, it will already be too late because Lucio and the Anarchists will have fled with the money and distributed it to those who truly need it. If everything goes well, they can repeat it each month.

When the plan works, City Bank sends Mr. Barrow to Paris to handle the situation. He questions Inspector Costello, who immediately believes Lucio is to blame. Costello is given a tail, and Lucio’s partner Anne cautions her husband to consider their daughter Juliette before acting foolishly. After all, he’ll be imprisoned if he makes a mistake.

Everyone considers Lucio’s larger plan, which involves transferring more than a million traveler’s checks, to be too risky and gives up. Lucio declines, rips off the tail Costello planted on him, and gets ready for the significant task. Lucio forgets the first lesson Quico taught him: never trust a stranger while meeting Tony Greco.

A Man of Action Ending Explained: Tony Greco is a police officer, and Charlie Alvarez also knew about it. He was offered $10,000 instead of 20 years in prison if he would help catch Lucio in the act. After being lied to, he leaves by plane for Buenos Aires. Lucio could get 15 years in prison, and he’s gotten death threats like a bullet-filled package.

Inspector Costello talks to Lucio, but he doesn’t know anything about the death threats. He says that Lucio has made a lot of people angry, including the Americans and the Secret Service. But Costello himself doesn’t like Americans, who we all know are dirty. In fact, Costello told Barrow in a calm voice that he wouldn’t lie about Lucio to get him arrested.

Anne’s phone is being tracked, and Lucio is found and arrested at a phone booth.

Will Lucio And Anne And Juliette Get Back Together?

Yes, Lucio the “Basque Fox” boards a plane bound for Tacoma, Bolivia, to reunite with his wife and daughter. Despite being late on his word, Lucio follows through and meets Juliette and Anne.

He also assures Anne that he will now assist her with her social work and do his part as a builder. The family reunites and moves in together, making for a bittersweet ending. However, the subtitles at the end of ‘A Man of Action’ reveal that Lucio and Anne eventually split up but remained good friends for the rest of their lives.

How does ‘A Man Of Action’ end?

Lucio is reunited with Anne and Juliette in Bolivia, where he spends the remainder of his days. We’ll never know how much Lucio demanded from City Bank to stop the anarchists. When questioned, Lucio always responds, “a lot.” Shortly after Lucio Urtubia’s actions, major banks sought alternatives to Traveler’s Cheques, resulting in the mid-1980s rise of cards and ATMs. Anne and Lucio broke up before his death on July 18, 2020, but remained friends.