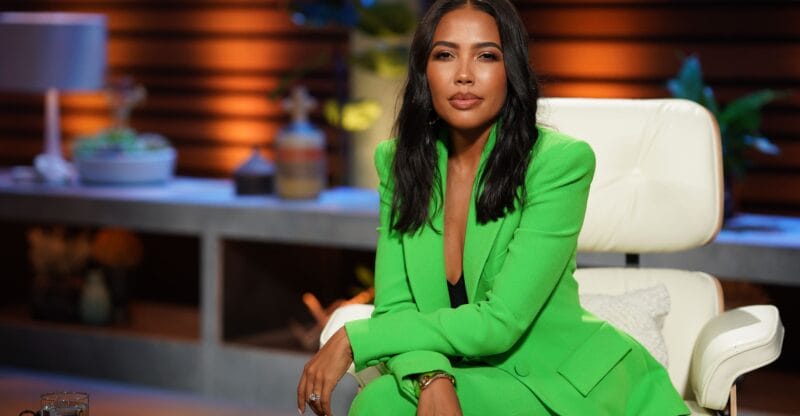 Shark Tank season 14 is upon us, and a guest shark has caught our attention. 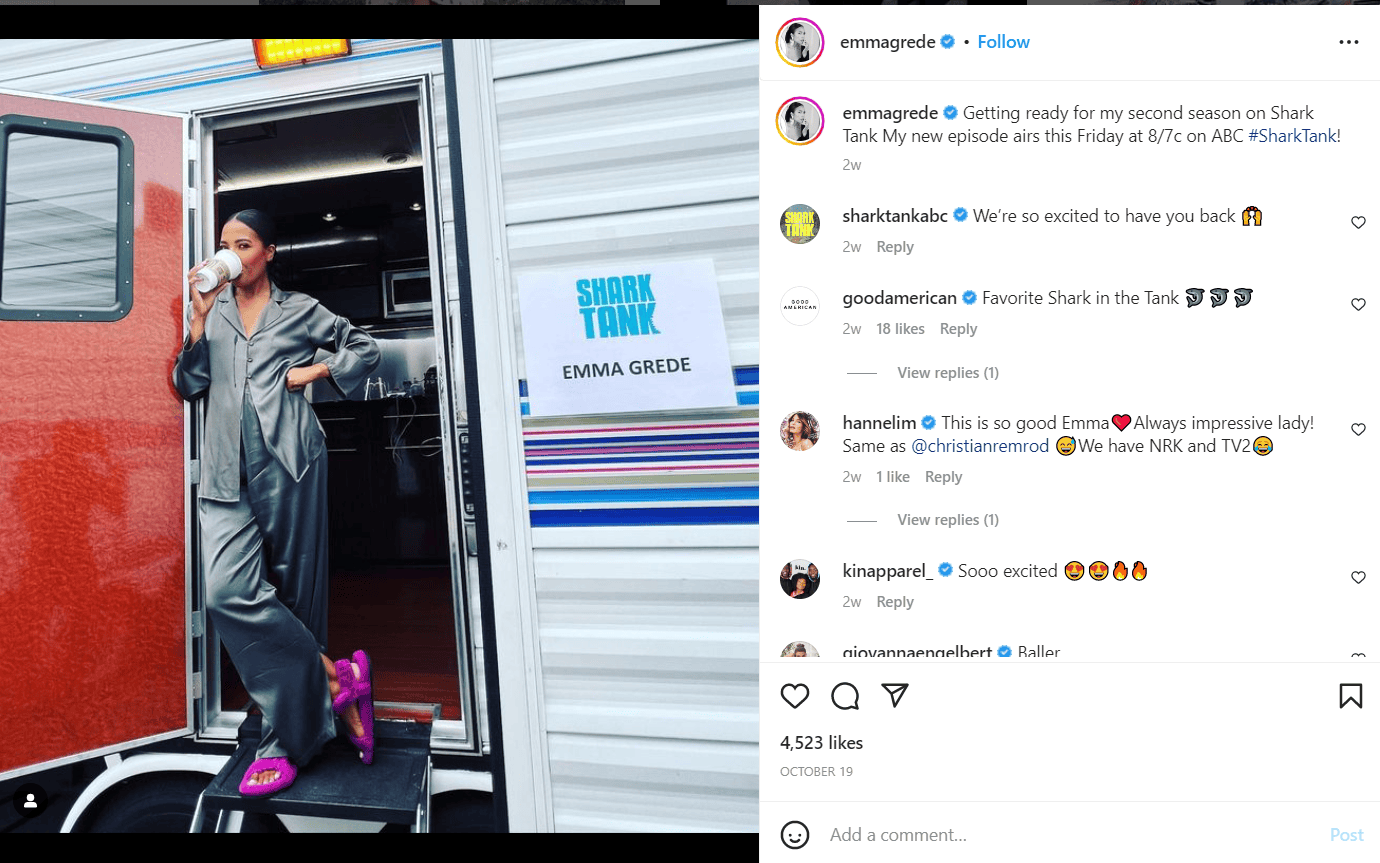 If you consider Idris Elba, David Beckham, and Kate Moss as examples of great talent from East London, meet Emma Grede, the newest inductee into this hall of fame. She is joining the famous six: Mark Cuban, Robert Herjavec, Barbara Corcoran, Lori Greiner, Daymond John, and Kevin O’Leary. We know Mark’s ears are always open to sports and cable businesses, Robert is nuts about nutrition, Barbara leans towards unique niche businesses like Grace and Lace, Daymond is the godfather of fashion, and Lori makes us always dive for the Home Depot Black Friday ad. What qualifies Emma Grede to be a shark? Read on.

Who is Emma Grede?

The 40-year-old British entrepreneur Emma Grede co-founded and is CEO of Good American, a founding partner of Skims, and the co-founder of Safely. Grede was raised in East London, England, where she was born. She is the daughter of a Jamaican and Trinidadian father and Jenny-Lee Findlay, an English mother who worked for Morgan Stanley. Emma has three sisters: Katie-Beth, Rachelle, and Charlotte. Her mother raised her in London’s Plaistow neighborhood. She attended the London College of Fashion to study business, though she didn’t complete the degree.

Who is Emma Grede’s husband?

Emma is married to millionaire Swedish businessman, Jens Grede. Jens is the chairman and co-founder of FRAME, Wednesday Agency, and Saturday Group. Jens and Emma married about ten years ago. Grey, Lola, Lake, and Rafferty, who are twins, round out their family of six. 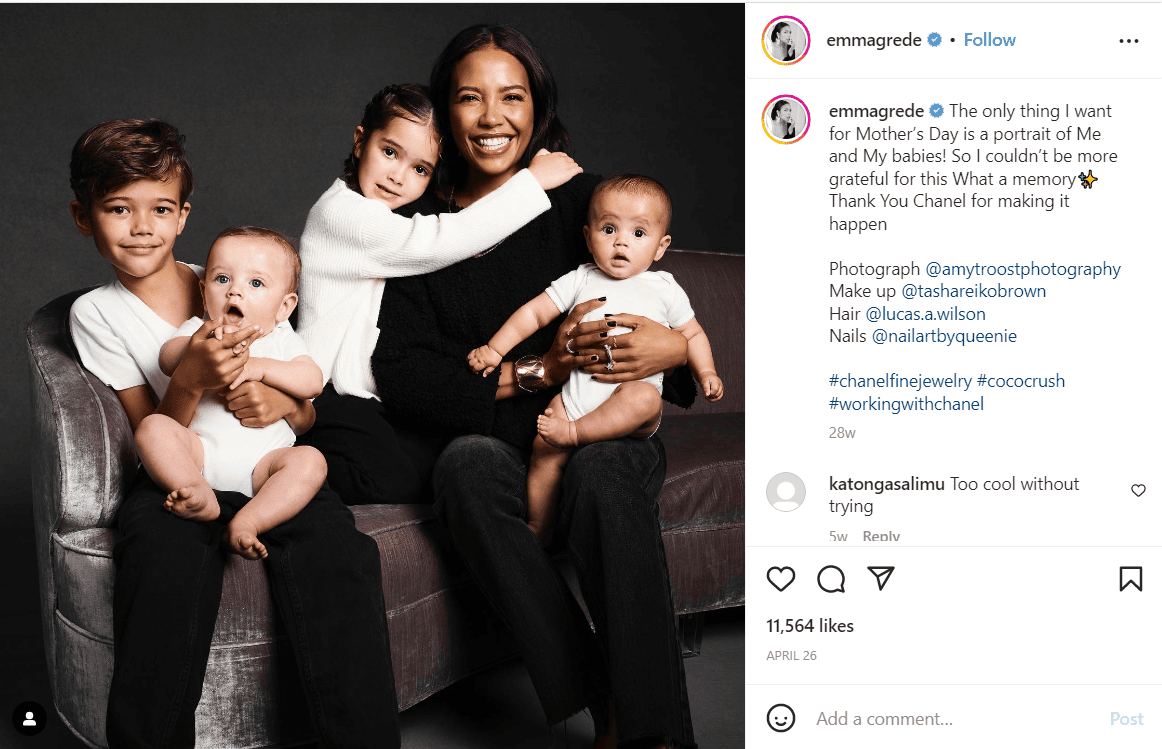 Emma Grede began her professional life at Quintessentially. She soon drew Inca Productions’ attention, one of Europe’s top fashion show and event organizers. Emma started as a producer at Inca, then grew to oversee the department that handled sponsorship and endorsement deals. She helped Inca establish the field of “designer collaborations,” which are partnerships between high fashion and consumer brands. Emma did this by working with some of today’s top designers, including Alexander McQueen, Christopher Kane, Vivienne Westwood, and Zac Posen, as well as companies like Chivas, Mercedes-Benz and Sky. Following Inca Productions, Emma Grede established and served as CEO of Independent Talent Brand (ITB) Worldwide, a talent management and entertainment marketing company with offices in London. Grede left the company after ITB was acquired by Rogers & Cowan in 2018.

Grede approached Kris Jenner with a business plan for a denim brand in early 2015, stating that she hoped to collaborate with Jenner’s daughter Khloé Kardashian. With Grede serving as CEO, Grede and Kardashian established Good American in October 2016 as a women’s clothing line that prioritized size diversity and body positivity. Sales for the first day of the Good American launch exceeded $1 million, making it the largest apparel launch in history and demonstrating the need for Good American’s entry into the market. Instead of the straight form seen in the traditional fashion establishment, the curvier, sexier, and stronger shape of women is what Good American was created to cater to. The company’s portfolio now includes dresses, activewear, shirts, swimwear, sleepwear, and shoes in addition to its original focus on selling denim pants. To accommodate a wider range of body types, they also developed the size 15.

Grede also co-founded Skims, a shapewear company started by her husband, Jens Grede, and Kim Kardashian in 2019. Grede oversees product development for the business. Moreover, Grede founded Safely, a line of plant-based cleaning and self-care products, along with Kris Jenner and Chrissy Teigen, in March 2021. She also serves as an ambassador for the Baby2Baby charity and is a board member of the women’s nonprofit Women for Women. 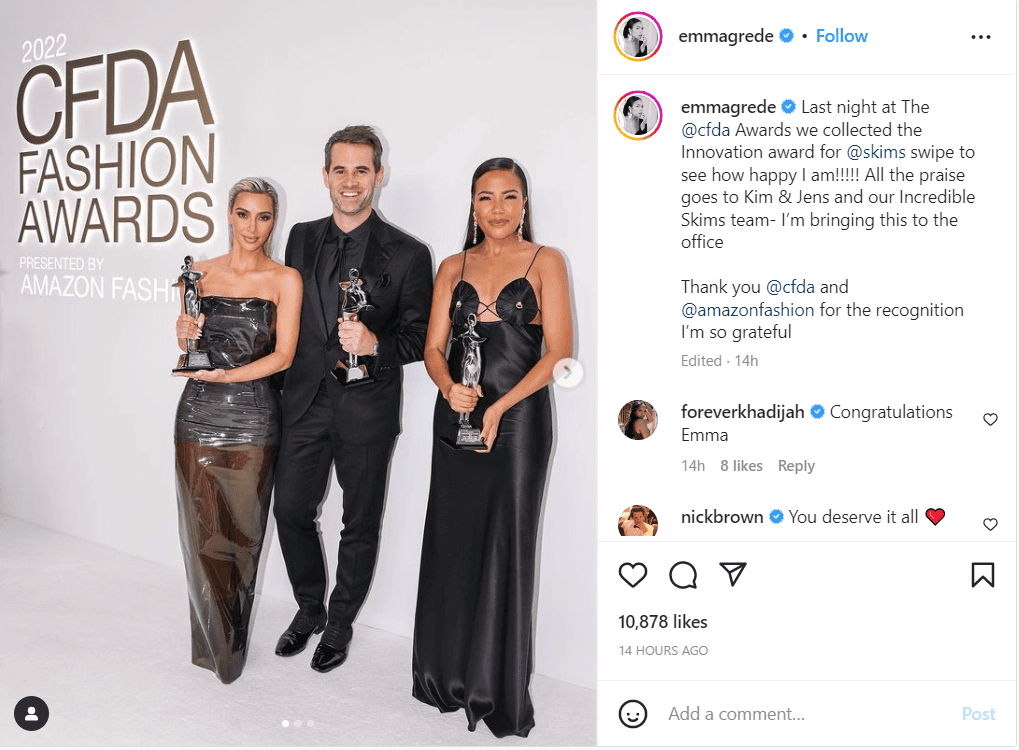 Grede has earned a seat on Forbes’ 2022 list of the wealthiest self-made women in the U.S. as a result of several of these enterprises succeeding. Due in significant part to her roughly 8% ownership in Skims, valued at $3.2 billion in January, Forbes determines Grede to be worth $360 million. The remainder of her wealth comes from her and her husband’s co-founded businesses, Good American, Safely, and Brady, the latter of which she co-founded with NFL legend Tom Brady. She also has smaller holdings in Frame and Brady.

Now that you are familiar with Emma Grede, let’s look at how she is affiliated with the reality program Shark Tank.

In four episodes of Season 13 of Shark Tank, including episodes 1, 14, 18, and 22, she participated as a guest judge. Grede had the authority to thoroughly examine the fashion enterprises that were offered because she is well-versed in the industry. She’s returning this year for Season 14.

Emma serves as the chairperson of the 15% Pledge, a campaign encouraging merchants to set aside 15% of their shelf space for black-owned companies. So we can already see where her interests will lie.

The women’s activewear company KIN Apparel was founded with the intention of encouraging women to feel at ease and confident in their skin. The brand offers a selection of fashionable items to fit all body types. The business was founded in 2020 with a $500 investment. Together, Emma Grede and Lori Greiner, the Home Depot enthusiast, put up $200,000 for a 30% stake in the business. KIN Apparel made $355,000 in revenue last year and currently has a $1.5 million net worth.