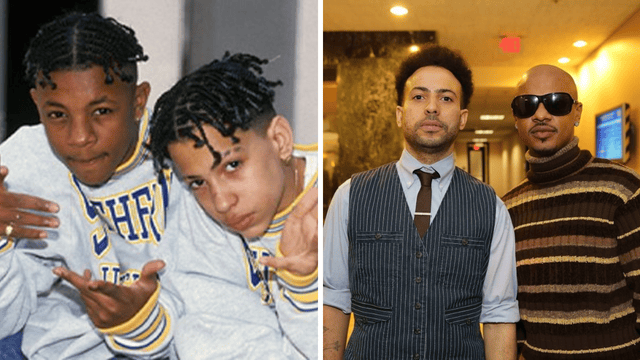 Where is Kriss Kross now: Essentially saying their name, “Kris Kross,” makes you long for the 1990s. Have you given in to the latest fashion trend of wearing your clothes inside out? R&B, rap, and hip hop all had their period of glory in the early ’90s.

Rap group Kris Kross, who at the time was only 13, was warmly received by the music scene of the 1990s. Their 1992 smash hit “Jump” and their signature style of wearing clothes backward are still fondly remembered by fans today.

where is Kriss Kross now? Let’s explore it.

In the beginning, we need to back up and establish some groundwork. James Christopher “Mac Daddy” or “Miggida Miggida Mac” Kelly and Christopher “Daddy Mac” Smith are the two members of Kris Kross. They both grew up in Atlanta and were pals in first grade.

They began performing together at a young age, and it was during a performance at a shopping center that they caught the attention of the famed rapper and producer Jermaine Dupre.

Once signed to the Ruffhouse Records label, they dropped their debut album, Totally Krossed Out, in the early spring of 1992. As it turned out, Dupri was responsible for creating the entire hit album. Jump, the band’s debut and most enduringly popular track topped the Billboard Hot 100 and remained there for an astonishing eight weeks.

That was the longest reign at the top for any rap song at the time. Confidently titled “Warm It Up,” the second song from Totally Krossed Out peaked at number 14 on the Billboard Hot 100. This helped the album reach platinum status, and it continued to rise from there.

As a result, people started to take notes. They were brought in as the opening act for MJ’s Dangerous World Tour and made a cameo in his Jam music video. Around this time, the boys appeared in a music video for TLC’s track “Hat 2 da Back,” since the group was an integral part of the production. Additionally, at this time, they launched Kris Kross: Make My Video for Sega CD, which was a bad idea.

Read More: Where is Leah Askey Now? Askey is Threatened With Disbarment!

It included stock material, official music videos, and several video animation effects popular in the 1990s, allowing users to create their own Kris Kross music videos. It bombed in the marketplace and was panned by reviewers and critics alike. Electronic Games Monthly produced a list of the 20 Worst Games of All Time, and Kris Kross: Make My Video made it to number eighteen on that list.

Released in the fall of 1993, Kris Kross Da Bomb was the group’s second studio album. That record was another huge win for the young Chrises; it went platinum.

They disbanded after recording their final album together, titled Young, Rich, and Dangerous. That’s not to suggest the record bombed or anything. In terms of sales, it was officially certified as gold, with almost half a million copies sold around the world. Subsequently, they did record a second album for their new company, Judgement Records.

Unfortunately, the CD with the 25 songs was never issued. Eventually, Kris Kross broke up and its members pursued separate careers, which ultimately led to their decline and eventual irrelevance. Both of them entered the realm of music production and composition.

What is Kris Kross Currently Doing in 2023?

There will not be a reunion anytime soon. Shortly after their appearance at Jermaine Dupri’s So So Def Anniversary Concert, Chris Kelly, aka “Mac Daddy,” was discovered dead at his home. After being taken there, he was declared dead at Atlanta Medical Centre. The autopsy results confirmed that he had died from a drug overdose. Age-wise, he was right around the middle at 34.

The revelation really saddened his old bandmate. He issued a statement soon after the incident saying, “he was like a brother” and that “he will cherish the memories of C-Connection.” He even made note of their nicknames like “Daddy Mac” and “Mac Daddy.”

Currently, “Daddy Mac” runs the online store UrbaneMuse, where you can buy things like coats, t-shirts, hoodies, jeans, shoes, slides, bags, totes, backpacks, belt bags, jewelry, and glasses. In addition, they provide other accessories for purchase, including but not limited to wallets, caps, scarves, and socks. The website also features a collection of prints of artwork, some of which are portraits and others of which are abstract.

To further celebrate the band’s milestone, he released a brand new Kris Kross album. It features five songs that are all different renditions of their hit single “Jump,” and it can be found on SoundCloud. There is a radio edit, an extended dance mix, a Super Cat Mix, and a Super Cat Dessert Mix, among others.