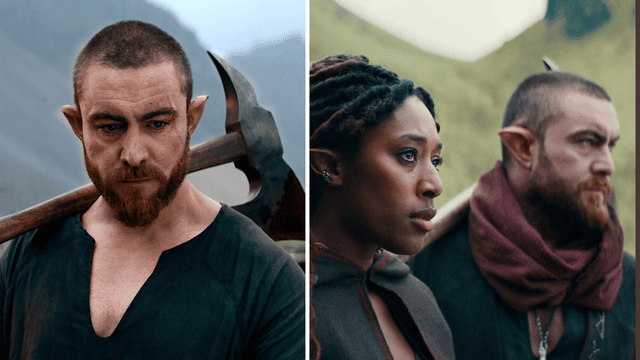 Who is the first witcher: The Witcher franchise has grown to become one of the most popular fantasy works of recent years, thanks to the success of the Netflix television show as well as the games and books that inspired it.

The Witchers are the most celebrated group of warriors in this strange world of magic and monsters. Monster hunters are known as “witchers” are specially trained warriors who endure genetic modification and rigorous mental and physical preparation.

Many of these people still live in their castles, indicating that they are very close to one another. While Geralt of Rivia, the protagonist of the series, is undoubtedly the most well-known Witcher, one fan favorite has always left them wondering. In other words, who was the pioneer Witcher? Even if this isn’t an easy question, here is what we know about it.

Who is the First Witcher?

After the Seven have banded together to plot their attack, Syndrill suggests that he and the heart of a gigantic beast they discovered in another realm be fused together. Syndrill desires to be the one to undergo the painful and potentially fatal procedure. Unfortunately, a magician won’t be able to help the Seven defeat the monster; they’ll need a warrior. In order to participate in the experiment, Fjall (Laurence O’Fuarain) and Éile (Sophia Brown) offer to be the test subjects.

However, Fjall poisons Éile with Syndrill’s elixirs while she sleeps despite her resolve to become the first Witcher. In order to prepare for the fusion with the monster’s heart, the warrior must undergo the Trial of the Grasses, which involves ingesting a number of potions and plants that shatter his body and mind. He wants to spare the woman he loves this ordeal. The final part of the process is taken over by Syndrill’s heavenly sister Zacaré (Lizzie Annis), who pierces Fjall’s body and injects the monster’s essence.

Fjall experiences a minute of death after the procedure. When he comes back to life, he’ll be able to smell the blood on other people’s skin and will be filled with such fury that he’ll want to kill the planet. Fjall is a match for the Empress’s beast since he is stronger and more resilient than any Elf could ever be.

Fjall kills the monster, but in doing so, he loses his sanity and begins to turn against his erstwhile companions. Since Éile has no choice but to put down Fjall, the Seven are the only people who actually see him change. That’s why Fjall is the first Witcher yet it took centuries for the Trial of the Grasses to be unearthed and changed so that there might be legitimate Witchers.

Who Created The First Witcher?

In season 2 of The Witcher, we learn that the mutants with enhanced physical strength and fewer magical skills known as Witchers are created by injecting them with a Mutagen. Unfortunately, not all Witchers make it through the metamorphosis unscathed. While some have been upgraded even further, increasing their strength. For example, compared to a typical Witcher, Geralt possesses greater strength.

Even while we have a good idea of what goes into making a Witcher, we haven’t yet uncovered the complete motivation for the practice. The intention of The Witcher: Blood Origin is to provide us insight into their origins, from who made them to what purpose they served. But thanks to Sapkowski’s works, we know a great deal about that already.

The elves, gnomes, and dwarves dominated the Continent for over 1,200 years before the events of The Witcher (1,500 in the games and books). This signifies that neither humans nor monsters had yet arrived on this planet. However, due to a catastrophic event known as the Conjunction of the Spheres, portals opened from other planets, causing catastrophic collisions. To enter this new and prosperous land, portals from both human and monster realms opened.

The events of The Witcher: Blood Origin are set against the backdrop of the rise of the tyrannical Golden Empire, which rules over the Continent in the wake of the collapse of the three major Elvish kingdoms of Xin’trea, Pryshia, and Darwen. Xin’trea Princess Merwyn (Mirren Mack) joins forces with the magician Balor (Lenny Henry) and the general Eredin (Jacob Collins-Levy) in an attempt to eliminate all monarchs and the clan warriors who are loyal to their authority so that Elfkind might enter a new golden age and conquer other dimensions.

The ultimate blow comes at a summit where the three kingdoms were supposed to sign a peace treaty and put an end to the Thousand-Year War. It’s a monster from another world that the traitors are using to wipe out everyone who stands in the way of the Golden Empire rising to power.

It is because of the work of Syndrill (Zach Wyatt), the wizard who uncovered the Continent’s Monoliths and invented spells to use the pillars as gates to distant realms, that the Golden Empire was able to rise to power. Balor betrays Syndrill and uses the Monoliths as a weapon of war after making contact with an ethereal entity that resides in a desolate world and trading his allegiance for command of a dragon-like beast. The creature has steel-like skin, can fly, and fires energy beams that reduce humans to dust.

After serving as a pawn in the kingdom-shaking coup, the monster is now stationed at Xin’trea’s palace to protect Empress Merwyn from assassination. After deciding to invade Xin’trea and topple the Golden Empire, the Seven must then come up with a strategy to eliminate the monster that protects Xin’trea. When faced with this dilemma, they decide to create a monstrosity out of themselves, which becomes the original Witcher.