Even though she had a problem with her costume during her performance of “Barbie Dreams,” the rapper walked off the stage feeling joyful and unconcerned about the incident. Minaj immediately followed her curtain call with a tweet that said, “I feel G R E A T.”

During the highly planned performance that Nicki Minaj gave, the front of her belted minidress opened up, revealing her bare breast and parts of her (thankfully) covered nipples. Minaj was wearing a minidress with a belt. The rapper, who is 35 years old, suddenly covered herself up and started her dance sequence after becoming aware that the event needed to go on.

Also Read: Nicki Minaj Net Worth 2022: How Does the “Richest Female Rapper” Spend?

At the time of the incident, Minaj was performing in a stage outfit consisting of a belted tiny top and matching underwear set. She had only recently unveiled her new neon orange hair. She moved her beautiful locks while breaking it down to display her chest, but she instantly adjusted it without flinching. She was wearing nothing but small sticker nipple covers.

She continued on as if she were a true queen and played some of her most renowned singles, including “Moment 4 Life” and “Majesty.”

Then, while she was onstage, she made a reference to it by stating, “You know what? Let’s go at it. They done saw my nipples at least 50 times tonight,” and the person who posted the video captioned it, “Nicki not giving a f—k IS ICONIC.” The “Anaconda” rapper shared the video again on Twitter, this time with an angry face emoji.

Afterward, she replied to a supporter whose tweet said, “Last night Nicki’s tits said ‘To FREEDOM!’ And I don’t have a problem with it. Free yourself like Fantasia said.”

They put on see thru pasties on me while heading to stage. I just KNEW they were my normal (non see through ones) chile… ummmm they were not! 😩 https://t.co/8m4Cxiqtzp

Nicki Minaj said that “They put on see thru pasties on me while heading to stage,” “I just KNEW they were my normal (non see through ones) chile… ummmm they were not!”

Before this, while performing “Bang Bang” alongside Ariana Grande and Jessie J at the 2014 MTV Video Music Awards, the “Chun-Li” singer famously almost lost her dress when the zipper down the front of her gown broke way and she had to grasp it with both hands.

Nicki visited Ellen for an appearance and shed light on the events that led to the confusion. 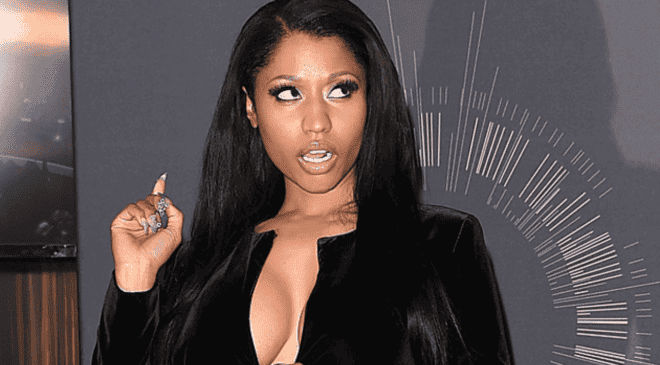 “We didn’t have a real quick change right there so it was literally my whole team standing there, holding curtains around me and it was pitch-black and I couldn’t see anything and right before it was time for me to walk out, they went to zip it up and nothing. And right there, I thought I died,” she told Ellen DeGeneres. “I didn’t have no underwear, no bra, because I had just taken off the ‘Anaconda’ outfit. So I was butt a** naked!”

Recommended: Ellen DeGeneres Net Worth: Her Journey From Comedian to LGBTQ Icon.

Nicki dubbed Eminem her “husband” on Instagram shortly after her talk show appearance, leading fans to wonder if he is one of the men she is dating at the moment. But don’t expect a romance to blossom between them. According to Eminem’s camp, the two rappers are “just tight musically, and strictly in the friend zone,” as previously reported.