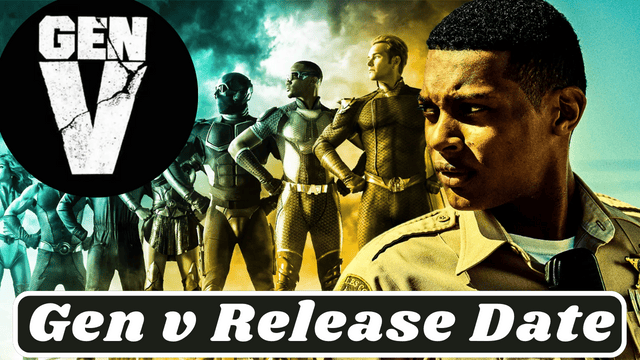 Gen V release date: The Boys comic book story arc “We Gotta Go Now” by Garth Ennis and Darick Robertson served as inspiration for the upcoming American superhero streaming television series Gen V, created by Michele Fazekas and Tara Butters as a spin-off of Eric Kripke’s The Boys. The series, which takes place at the same time as The Boys season 4, will debut on Amazon Prime Video in 2023.

The spin-off of Boys is called Gen V

Showrunners Michele Fazekas and Tara Butters, who previously worked on Law & Order: Special Victims Unit, were tapped by Amazon to lead the production of Gen V, which was ordered in September 2021.

Executive producer and writer for The Boys Craig Rosenberg, who previously penned the third episode of season two, “Over the Hill with the Swords of a Thousand Men,” is also involved in the project’s creation at the creative level. Cripke, Seth Rogen, Evan Goldberg, James Weaver, Michaela Starr, Neal H. Moritz, and Pavun Shetty, as well as Ennis and Robertson, will all serve as executive producers on Rosenberg’s The Boys.

The release of Gen V is scheduled for the year 2023. Amazon has not yet announced a precise release date. The time of release for Generation V prior to the premiere of Season 4 of The Boys is unknown.

Godolkin University School of Crimefighting, owned and maintained by Vought International, will be the exclusive location for the events of Gen V. Gen V will expand the list of Marvel and DC characters mocked by The Boys, despite the fact that the scenario is new.

Kripke stated in an interview with TheWrap in 2020 that the program will be based on the G-Men, a parody version of the X-Men from The Boys comics about a super squad founded by pedophile John Godolkin. The G-Men have a component that can be described as a “college-like” educational experience. And we just utilized that as a springboard, kind of like The Boys, where we take an initial premise and then we run with it in our own odd manner,” Kripke explained.

The show seems like it will combine elements of The Hunger Games and sex comedies, with a healthy dose of the humor that helped The Boys become a hit. Kripke said he wants the series to be “one of the most realistic colleges shows anyone has done.”

With no present intentions for a crossover, the spin-off will take place in the same universe as the original. Gen V will show how Vought uses Compound V to permanently transform teenagers into Supes, unlike The Boys season 3 focused on the effects of Temp V or V24, which only grant superpowers for 24 hours.