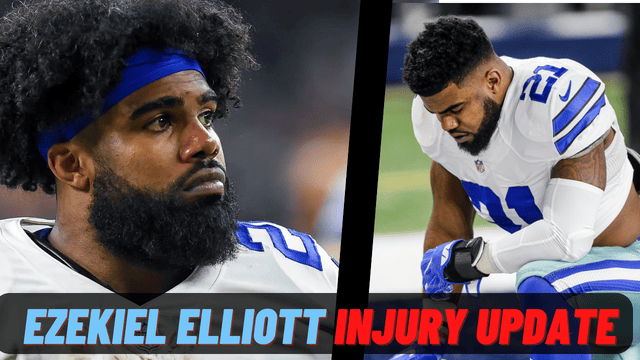 Ezekiel Elliott injury update: Ezekiel Elijah Elliott is a running back for the National Football League team Dallas Cowboys (NFL). He went to college at Ohio State and played football there. In 2015, he was named to the second-team of All-America. Elliott was the fourth player taken by the Cowboys in the 2016 NFL Draft. He was chosen for the Pro Bowl three times and the All-Pro team twice. In 2016 and 2018, he led the league in rushing yards.

Elliott was born in Alton, Illinois. Both of Elliott’s parents were college athletes. His mother, who used to be called Dawn Huff, won state titles in three sports in high school. She then went to the University of Missouri and ran track there. Stacy, his father, played linebacker for the University of Missouri football team and ran Fifth Down Enterprises. Elliott’s grandfather on his mother’s side was a basketball player for Drake University. Shawn Huff, a Finnish pro basketball player, is his uncle.

Last few weeks of the 2022 NFL season, Ezekiel Elliot has been hobbled by a knee injury. The Sunday Night Football game between the Dallas Cowboys and the Indianapolis Colts in Week 13 will go on with the team’s star running back healthy and available to play. He will likely return to his regular role in the game.

The Cowboys’ offensive scheme calls for a nearly even split of touches between Elliot and Tony Pollard in the backfield. Short-yardage and goal-line work, as well as key blocking situations for quarterback Dak Prescott, should continue to go Elliot’s way.

Pollard has excelled in the passing game and is a specialist at making explosive plays.

A knee injury suffered by Ezekiel Elliot during the Cowboys’ Week 7 game against the Detroit Lions was the initial cause for concern. He avoided the worst-case scenario by being diagnosed with a sprain but was still sidelined.

Throughout the 2022 NFL season, Elliot has been a reliable member of the Dallas Cowboys offense. He’s not quite the same elite superstar running back he used to be, but he’s still proven to be an important cog in their offense. In every game he’s played this season, he’s had at least 10 carries, and he’s scored seven times.

Elliot has contributed 577 rushing yards so far this season, giving him a chance to rush for 1,000 yards if he keeps up his current pace through Week 13. He has also been effective between the tackles, where he has had many of his carries, averaging 4.1 yards per carry. When Elliot has at least 15 carries in a game, the Cowboys have a perfect record (7-0) this season.