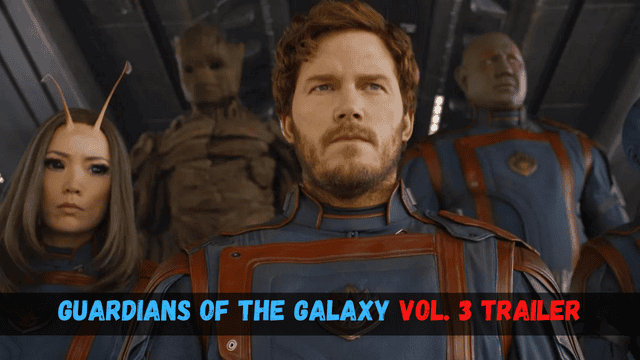 Well, here we are again. Guardians of the Galaxy Vol. 3 is coming out soon, and even after watching its new trailer, I still don’t know much about what we’ll see in May. That’s probably for the best because if I knew what the story was about, I wouldn’t be interested at all. Any way you look at it, it’s time to break this trailer down.

Trailer of Guardians of the Galaxy Vol. 3!

The first trailer for “Guardians of the Galaxy Vol. 3” came out Thursday on YouTube, after making its debut at Brazil Comic Con. It showed again the unlikely group of heroes who come from obscure places in the Marvel comics but have become one of the most beloved groups in the MCU thanks to director James Gunn.

Guardians Are Returning For Volume 3!

Star-Lord, played by Chris Pratt, is shown standing on the bridge of the Starship Bowie as the trailer starts. “We were gone for a long time,” he says in a voiceover, referring to the fact that Thanos turned the team into dust in Avengers: Infinity War, except for Rocket.

“But the galaxy still needs the Guardians, no matter what happens next.” In a nod to Dan Abnett and Andy Lanning’s work on the Guardians of the Galaxy comics, the Guardians are shown wearing dark blue and red uniforms. This is the same thing that Star-Lord said. This makes a lot of sense since Gunn got a lot of ideas from Abnett and Lanning’s run.

Then, Bowie lands in what looks like a suburban area. Only one thing is wrong: all of the people have animal heads and other body parts. When Star-Lord tries to say “We come in peace” to the animal people, a little goat girl throws her ball at them. Dave Bautista’s character, Drax, grabs the ball and throws it back at her, hitting her in the face with it.

What Song is in the Trailer for Guardians of the Galaxy 3?

Guardians of the Galaxy Vol. 3’s first trailer had the song “In the Meantime” by Spacehog playing in the background. This song was on the group’s first album, “Resident Alien,” which came out in 1995. This is the first song from after 1990 to be used in an MCU Guardians story. It is also the most recent song to be used.

The song’s main idea is about accepting yourself, which will be a big part of the Guardians’ third solo movie in the MCU, especially for Bradley Cooper’s Rocket Raccoon.

During San Diego Comic-Con 2022, director and writer James Gunn talked about Rocket and the idea of acceptance. He said that when he was first hired to direct Guardians of the Galaxy in 2014, he was worried that Rocket “was going to be stupid.”

Release Date of Guardians of the Galaxy Vol. 3

James Gunn said in November 2014 that he had some ideas for a third movie in the series, and in April 2017 he said he would be back to write and direct it. Disney fired him from the film in July 2018 after some of his controversial tweets came back up, but by October of that year, the studio changed its mind and brought Gunn back as director.

Gunn’s return was made public in March 2019. Production resumed after Gunn finished working on his film The Suicide Squad (2021) and the first season of its spin-off series Peacemaker (2022). The movie was shot at Trilith Studios in Atlanta, Georgia, from November 2021 to early May 2022. Guardians of the Galaxy Vol. 3 is set to come out in the US on May 5, 2023. It is part of the MCU’s Phase Five.

Future Movies of Guardians of the Galaxy!

Gunn said in April 2017 that there could be a fourth Guardians of the Galaxy movie, but it would probably be about a different group of characters since Gunn planned to end the story of the team from the first three movies in Vol. 3.

Later in September, Gunn said he didn’t think he’d be back for another Guardians movie, but he said he’d keep working with Marvel Studios on other projects that use the Guardians and other cosmic characters.

One of Gunn’s projects was a movie about Drax and Mantis. Bautista called it “brilliant.” But as of May 2021, Bautista hadn’t heard anything new about it. He thought that Marvel Studios wasn’t “very interested” or that it didn’t fit with how they had things planned.

Gunn said in September 2019 and again in May 2021 that Vol. 3 would be the last Guardians movie he would make. Gillan said in July 2021 that she wanted to play Nebula after Vol. 3 was over.