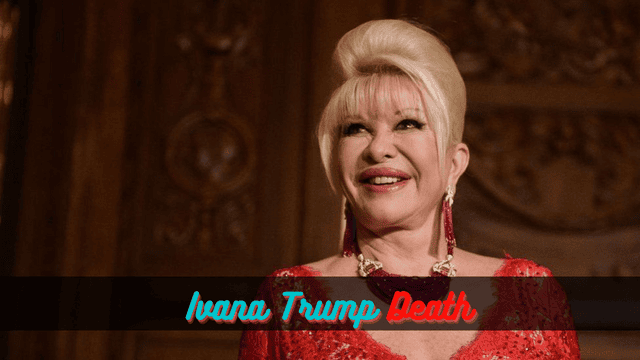 Ivana fell down the stairs at her home on the Upper East Side of Manhattan on July 14, 2022, and hit her chest hard. She was 73 years old. On social media, her ex-husband Donald and their three children, as well as a number of politicians and famous people, sent their condolences.

On July 20, her funeral was held at the Roman Catholic Church of St. Vincent Ferrer, which is close to where she lived. Ivana was buried in Bedminster, New Jersey, at the Trump National Golf Club Bedminster.

NBC News said that a senior New York City official who had direct knowledge of the situation said that the circumstances of her death fit with a fall on the stairs. The official also said that the death does not seem strange.

What Was the Cause of Ivana Trump’s Death?

According to US health officials, falls are the leading cause of injury-related death for people 65 and older. Ivana Trump passed away at the age of 73 a day earlier at her home in Manhattan. But the former president made no mention of the cause or manner of her passing. Ivana Trump was discovered at the bottom of her home’s stairs on Friday, according to a spokesperson for the chief medical examiner.

Ivana Trump died Thursday at the age of 73 after falling down the stairs of her New York City apartment, the city’s medical examiner said. https://t.co/AFD5Gc1mf0

Who was Ivana Trump?

Ivana Marie Trump, a Czech-American businesswoman, media personality, socialite, fashion designer, author, and model, lived from February 20, 1949, to July 14, 2022. Ivana spent her early years in Canada before moving to the US and getting married to Donald Trump in 1977.

She served as the vice president of interior design, the CEO and president of the Trump’s Castle casino resort, and the manager of the Plaza Hotel for The Trump Organization. Her mother was a telephone operator, and her father was an electrical engineer. He encouraged his daughter’s skiing skills, which she had started at the age of four. S

he joined the junior national ski team after honing her skiing abilities, which gave her the chance to travel outside of the Soviet-era communist borders of what was then the Czechoslovak Socialist Republic. She studied at Prague’s Charles University, where she graduated with a master’s in physical education in 1972.

Ivana and Donald were often in the tabloids, and they did their best to make their marriage seem famous. Ivana Trump worked for the Trump Organization as vice president of interior design. She was also the CEO of some Trump hotel properties and also design the Trump Tower.

Their falling-apart marriage was all over the tabloids, and they finally got a divorce in 1992. Ivana Trump said that her husband raped her and ripped out her hair while they were married.  But Ivana Trump later denied this in a statement she made right before the book came out. This was written about in the 1993 book Lost Tycoon: The Many Lives of Donald Trump.

Ivana and Donald appeared on several TV shows together like The Oprah Winfrey Show in April 1988. She was interviewed by Barbara Walters for the ABC show 20/20 after she split up with Donald.

In 1991, Donald stopped paying her alimony and said he was going to sue Ivana for monetary damages. In 1992, she went back on The Oprah Winfrey Show to say, “I will no longer let men control me.”

Ivana Trump has a Net Worth of $100 Million!

Ivana Trump was an athlete who competed in the Olympics, a socialite, and a fashion model. At the time of her passing, Ivana Trump had a net worth of $100 million. The fact that Ivana Trump Trump was married to Donald Trump was perhaps the single most important factor in her fame. They wed in 1977 and were married till 1992. They are known for their children, Donald Trump Jr., Ivanka Trump, and Eric Trump, all of whom were born to them as a couple.