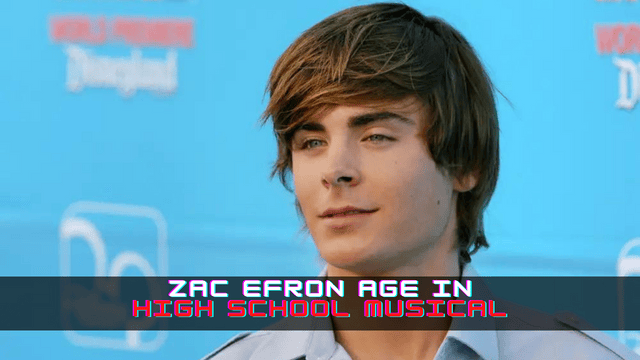 Zac Efron went back to Salt Lake’s East High School after the High School Musical movie, which was shot there, came out. How old was he when the movie was filmed there? On July 22, the actor posted a picture he had taken at the school on his social media. The post quickly got everyone excited.

When Zac was in the Disney Channel movie, people all over the world learned about him. Since Zac was so happy during his visit, we’re hoping to hear more from him about High School Musical.

How Old Was Zac Efron in High School Musical?

Zac Efron played Troy Bolton, a high school basketball star and singer, in the Disney movie “High School Musical.” In real life, he was just a little bit older than the character he played. Insider says that Efron played this role in the first “HSM” movie when he was only 18 years old.

In a 2019 interview with BBC Radio 1, Efron made fun of his “HSM” dance moves and said that when he was cast as a young actor in the movie, he had film school in mind.

In an interview when people asked him about his at the time of the shooting then he said:

“I didn’t know how to dance during those ”High School Musical” movies. Well, I was just a kid, like, from the street“

“I was an actor scraping by in a one-bedroom studio apartment and thinking I was going to film school, and I booked that.“

Was Zac Really a Singer in a Movie?

Zac’s voice was not used in the first part of the movie. Instead, Canadian singer Drew Seeley stepped in to play the part. But the actor had already recorded all the songs.

No one knows why the director decided not to use his voice. Still, fans did get to hear Zac’s voice in the film’s next two parts. Also, Zac was seen performing at all the events where the cast of the High School Musical got together. Fans still love the songs from the movie, and Zac’s voice is a big part of that.

Efron tried to get away from his image as a teen musical star after his famous role as Troy Bolton. In 2007, he was in the movie “Hairspray” with John Travolta and Michelle Pfeiffer, who are both big names in Hollywood.

When Zac Efron turned 21, he and his co-stars got back together for the last time in “High School Musical 3,” the last movie in the Disney trilogy.
The second movie was about Troy Bolton and his friends’ summer vacation. The third movie was about their last year of high school and their move to college.