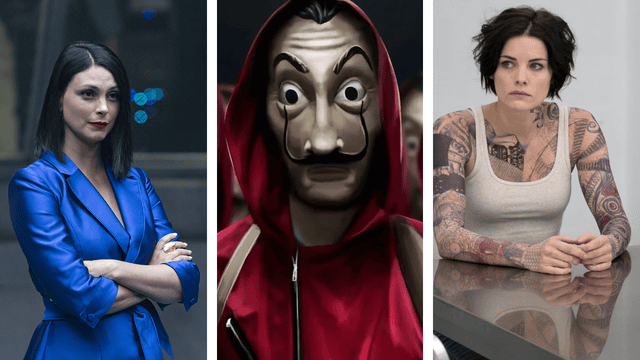 Here are the Top 10 TV Shows Like Kaleidoscope to Watch in 2023!

10 TV Shows Like Kaleidoscope: The Netflix original series ‘Kaleidoscope‘ is an unconventional heist thriller that follows Ray Vernon (AKA Leo Pap) as he recruits a team of professional thieves to steal $7 billion in bonds from the world’s most secure vault. Eric Garcia is responsible for producing and developing the show.

Due to the novel storytelling format, this thriller series can be enjoyed by its audience in any order.

The plot’s increasing complexity does a good job of keeping viewers engaged. If you like the show’s non-linear storytelling and its use of heist genre clichés, you’re probably on the lookout for similar stories to binge. Here’s a list of options that are similar and could be fun in that situation.

The majority of these shows, including “Kaleidoscope Season 1,” are available on streaming sites like Netflix, Amazon Prime, and Hulu.

The plot of the Spanish crime drama TV show Money Heist is recounted from the perspective of one of the robbers, Tokyo (rsula Corberó). The series follows two well-planned heists conducted by the Professor (lvaro Morte), one on the Royal Mint of Spain and one on the Bank of Spain.

Money Heist follows this daring strategy in a non-linear approach that somewhat reminds viewers of Kaleidoscope while still focusing on the connections between its heroes. Even though there are ridiculous events in nearly every episode, the show has such a high level of attraction that it becomes increasingly hard to stop watching.

The protagonist of the French mystery thriller Lupin is the gentleman thief Assane Diop (Omar Sy), who takes his cues from the fictitious Arsène Lupin. When he finds out who killed his father, he plans to get even. Assane, 25 years after his death, decides to use his charisma and skills in stealing, deception, and disguise to find and expose the perpetrators.

Like Kaleidoscope, Lupin is a heart-pounding, bold, and ambitious thriller that keeps viewers hooked to their seats until the very end. It also emphasizes the mysteriousness of literary history and reflects French views on racism and immigration.

If you like the non-linear storytelling in “Kaleidoscope,” “Blindspot” may present similar difficulties. Sullivan Stapleton and Jaimie Alexander feature in the action thriller series created by Martin Gero.

Our protagonist, FBI agent Kurt Weller, is the one who unearths Jane Doe, a nameless woman suffering from amnesia. However, the tattoos that cover her entire body may hold the keys to solving some truly heinous crimes that Kurt and his crew must uncover at all costs.

While the plot of Sky Rojo is distinct from that of Kaleidoscope, it is similar in that it illustrates the protagonists’ cleverness in their pursuit of financial independence. Although each has a unique personality and backstory, they share a dramatic intensity with one another.

The show explores ideas like love, justice, and truth while being firmly anchored in the conventions of the crime genre. Whether or whether the characters’ actions are illegal, viewers of “Kaleidoscope” will identify with their deeply personal motivations.

The story of Good Girls revolves around three mothers, two of whom are sisters, and their struggle to make ends meet in a middle-class Michigan suburb. They decide to rob a business since they are fed up with constantly having their possessions taken from them, but they get more than they bargained for.

Good Girls raises the stakes by placing its female protagonists in a male-dominated criminal underworld, where their goals become obscured by new desires for power, sexual pleasure, and mayhem. Fans of Kaleidoscope are likely to enjoy this show because of its complicated antiheroes, creative storytelling, and inventive camerawork.

Although the initial focus of Prison Break is on escaping from a facility rather than breaking into one, Michael’s plot is just as detailed and his execution just as spectacular as Leo’s in Kaleidoscope. The supporting cast in Prison Break, like the one in Garcia’s series, does a lot of the work and gives the audience enough to ponder about as the story progresses.

The success of the first season of Prison Break was unfortunately not sustained for the rest of the series, but that doesn’t mean that the other seasons didn’t have their moments. Breaking out of Sona and obtaining access to Scylla create some terrific high-stakes sequences that wouldn’t seem out of place in the very finest heist shows and movies, and a lot of that is due to the ensemble and the chemistry between them.

Black Mirror: Bandersnatch is technically more of a movie than a television program, although many people still think of it as a TV program because it is a spinoff of Charlie Brooker’s long-running anthology series. Those who do will find that the show’s interactive narrative makes it stand out among others like Kaleidoscope.

Black Mirror: Bandersnatch gives its viewers an unprecedented amount of agency by letting them determine not simply how the tale unfolds, but also in what order. Like in a traditional pick-your-own-adventure book, the audience has the power to decide the course of the story, with five possible outcomes. Bandersnatch is surprisingly rewatchable because many of the endings are somewhat different from one another.

In The Great Heist, Colombian actors reenact the 1994 robbery of El Banco de la Republica, the central bank of Colombia, from its location in Valledupar. In the series’ central plot, a group of highly trained thieves plots an audacious bank robbery in order to steal $33 million, which sets in motion a web of tangled events.

The show is similar to Kaleidoscope in that it centers on a robbery that is orchestrated via a game of deception with a diverse cast of characters. The performance is so fast-paced that you’ll be dripping with sweat by the end.

In Heist, a Netflix true crime docuseries, the perpetrators of three separate robberies recount their experiences through interviews and dramatic recreations.

Both “Heist” and “Kaleidoscope” chronicle the stories of those who planned and carried out heists, therefore they share that aspect in common. Moreover, Heist is both entertaining and well-written, saving some of its many twists and turns for when they will have the greatest impact. It’s different from the usual true-crime Netflix documentaries that come recommended. In the Netflix true-crime docuseries Heist, the perpetrators of three separate robberies recount their experiences through interviews and dramatic recreations.

Heist and Kaleidoscope have much in common in that they both chronicle the stories of those who have planned and carried out heists. In addition, the numerous twists and turns in Heist are cleverly concealed until they are most effective, making for a really entertaining read. It’s a welcome change from the usual true-crime documentaries on Netflix, and it’s definitely worth seeing.

“Maine Cabin Masters Season 9” Will Be the Final Installment!