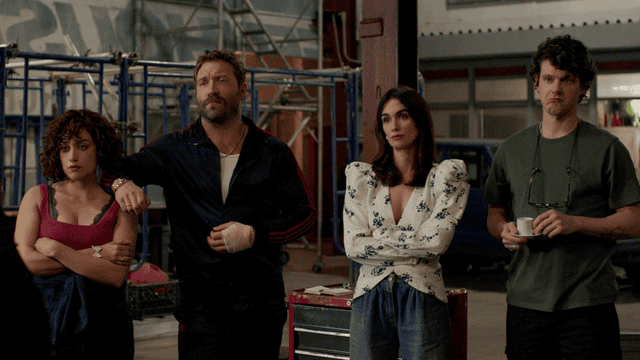 Kaleidoscope ending explained: The unique selling proposition of the new Netflix series “Kaleidoscope” is that it is non-linear, meaning that the episodes can be viewed in any sequence. Eric Garcia’s “Kaleidoscope” follows a criminal who vows vengeance on the one who gave him everything he has.

Series creators may feel they’ve done something innovative by establishing a non-linear order, but the story they’ve presented is lacking. The lack of suspense and the many story holes hurt “Kaleidoscope’s” credibility. The flawed protagonist is convincingly played by Giancarlo Esposito, who is in fine form.

While the series features excellent acting from names like Paz Vega, Rosaline Elbay, Peter Kendall, Niousha Noor, and Rufus Sewell, the script falls short of delivering the same level of drama. Here we’ll investigate whether or not Ray Vernon was successful in his attempt to rob a bank and why he felt it was necessary to endanger his life to do so.

A title card appears, telling us that six months have passed since the heist. Nazan is depicted here dissecting the make-up of the crew in an effort to make sense of the who, what, and how of their situation. We learn that Roger has been convicted of murder, arson, and using a false identity and is currently incarcerated. She is curious about the means by which the perpetrators of the robbery of the century were able to avoid detection.

Up next, Bob pays Roger a jailhouse visit. Bob admits he is one of the heist’s accomplices but is unable to elaborate at the moment. Bob then knocks them out and demands the fifty thousand. Well, Roger promises him he can have $20,000 if he will only kill Leo.

Right now, Leo is having a hard time as his Parkinson’s disease progresses. His phone is ringing off the hook because Stan is attempting to reach him about obtaining passports for exiting the country. The next scene takes place in a bar, where Bob is surrounded by a group of men he hopes will lead him to the rest of the team. They are hesitant at first, but when he tells them how much money they stole, the men become interested.

Our next stop is Foley Beach, where Stan and Judy have been striving without success to make a mark. After that, Ava comes in to check on Leo while he’s working out. Now, we return to Bob, who has set off in search of a man he hopes may help him find his way.

Stan, in an attempt to reassure Judy, suggests they take on one particularly large project in the hotel room. He hopes for a happily ever after, but she explains why he may not get it. She reaches into her purse, takes out the bracelet, and announces, “Fence it.” In closing, she declares, “Bob is the one guy we don’t have to worry about anymore.”

Nazan has been told by her superiors that she must take immediate action in regard to the triplets. Furthermore, she threatens to clean out her desk if she acts erratically again. When Ava returns to Leo, he is having a seizure and she says they need to find a new home immediately. When he returns, she brings up a job in Ohio that will net them $500,000 in cash. Stan, who has been sitting there, announces that the jeweler may have discovered the bracelet and that they require assistance.

Ava learns that the FBI is relocating to Folley Beach. When she returns home, she informs Leo that they must immediately begin packing. When Nazan asks the pawnshop worker some questions, he acts really stupid (he is wearing a Federal Boob Inspector shirt). As soon as Bob and his men arrive at Ava and Leo’s, the shooting starts. As Ava begins to gain the upper hand, Bob slams the gun down on her head, knocking her unconscious.

The usage of Bob’s phone’s recording feature resulted in one of the most iconic TV gags ever. When he tries to use the program again after the first time, an advertisement appears and promptly shuts off. I literally died of laughter. The character of Bob, a miserly miser who would never pay a dime to unlock anything in an app, is the inspiration for some seriously funny writing.

Bob bumps into Ava’s friend as he searches the house for the guns. Then he puts a gun to Ava’s head, has her sit on the couch, and tells Bob she’ll contact Leo. Then Leo shows up, claiming to have the cash in hand. In particular, Bob is curious as to the whereabouts of Judy and Stan. Then, after Leo tries to corner Bob, Bob states that he has to choose between Judy and Stan, or Ava and grandma. Bob asks Leo to give him a call and schedule a time to meet.

Who and why stole the bonds?

Only the identity of the bond thieves remained a mystery after the series deftly depicted why Leo (Esposito) craved vengeance and how the long-drawn plan stretched out over the years. Hannah Kim (Tati Gabrielle), Leo’s confidential source, proved to be instrumental in cracking the system and gaining access to the vault.

Before the heist, Leo requested his daughter to leave town so she wouldn’t be tainted by association with the criminals, but she had other intentions. Later in the novel, we learn that Hannah had deceived her father and had plotted a theft in which blank bond papers were substituted for the originals.

Ultimately, Hannah did betray her father in Kaleidoscope, but not for the wrong reasons. She did it because she didn’t want her dad to spend the rest of his life in fear of being caught if he tried to steal the bonds. She was also aware that the bond’s members were formidable foes and that she and her father couldn’t have evaded them forever.

What happened to Hannah’s bonds?

It’s crucial to know what Hannah did with those priceless ties, as they were the central focus of the entire series. Put another way, she gave them back to their proper owner. Customers quickly accepted these bonds despite the fact that they were, in theory, unlawful money because of their lack of disclosure.

Having close relationships with the guys in charge of protecting Hannah and her family helped her rise in the social ranks.

And in the conclusion of Kaleidoscope, Leo got revenge instead of money, which was what he really wanted. To prove that he was the one who damaged Roger’s (Ruffalo Sewell) career, Leo left a precious gem in Roger’s (Ruffalo Sewell) possession. Leo had come to believe that he had lost everything on the night they attempted to take the diamonds, therefore this stone carried immense value for him.

This eight-part series is available to watch online on Netflix immediately. Follow this space for further information.