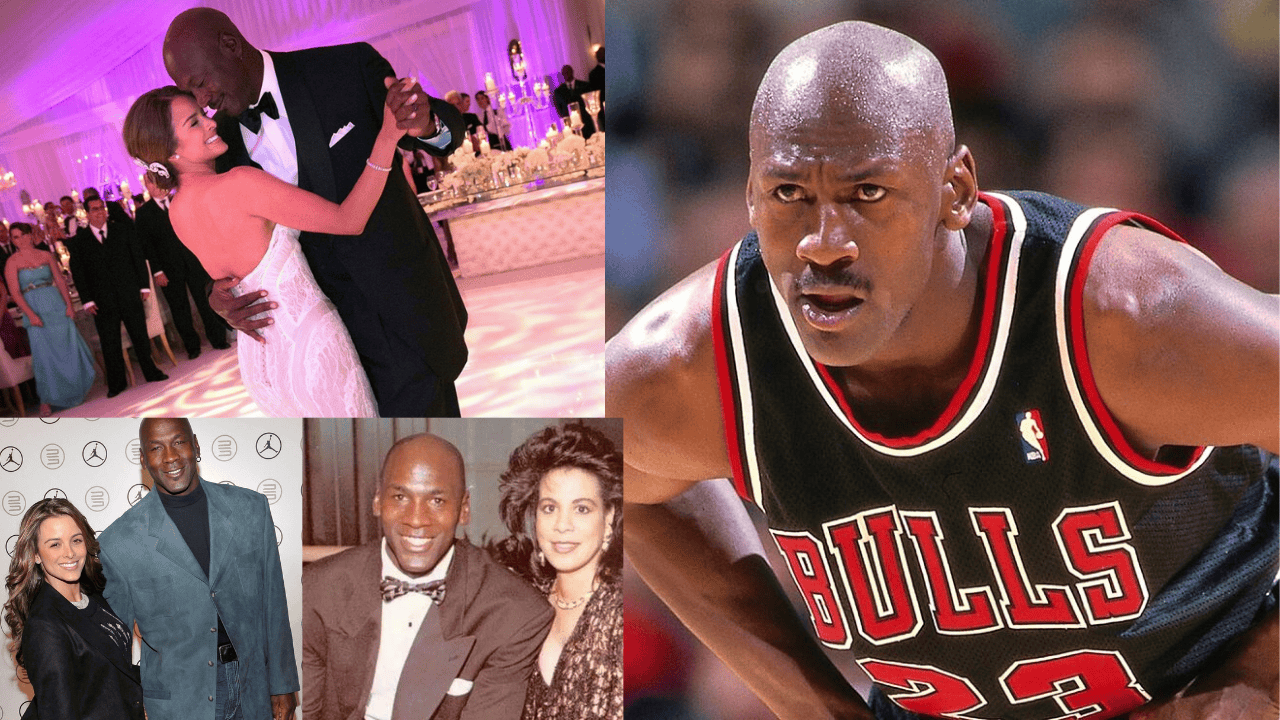 Michael Jordan will be remembered as a legendary player in the history of basketball. In his off-court life, though, he married Yvette Prieto. In 2008, after divorcing his first wife Juanita Vanoy in 2006, Jordan went to a bar in Miami and met the former model.

There was instant chemistry between them, and the following year they were living together. When 2011 rolled around, they announced their engagement. Jordan and Prieto wed on April 27, 2013, in front of 500 guests. Both have settled down in Jupiter, Florida, with their twin kids.

The NBA great and the model of Cuban descent have kept their romance under wraps, but they have made a few red carpet appearances together. The duo has also been seen at NBA and NHL games, as well as boxing and NASCAR events. All the details regarding Michael Jordan’s wife, Yvette Prieto, are provided below.

On September 2, 1989, Michael Jordan wed Juanita Vanoy in a ceremony that took place at A Little White Wedding Chapel in the city of Las Vegas, Nevada. 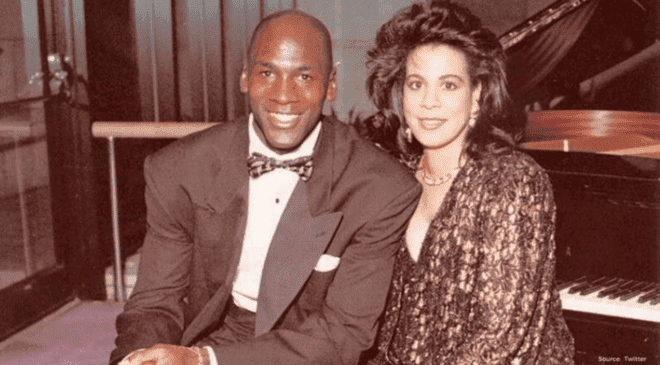 The Jordans initially filed for divorce on January 4, 2002, alleging problems that could not be resolved; however, they later addressed their differences. They submitted yet another divorce petition, and on December 29, 2006, they were awarded a final decree of dissolution of marriage. The decision to end their marriage was “mutually and amicably” reached by both parties.

According to the sources, Juanita was awarded a divorce payment of $168 million, which at the time was the greatest amount paid out in a celebrity divorce settlement that was publicly documented.

In 2008, the model and her future husband met at a bar in Miami. It was said that the following year they set up house together. In 2011, during the Christmas season, Jordan asked Prieto to be his wife. “They’ve been planning for months and months. He wanted to give Yvette everything she’s ever wanted,” an anonymous insider said to PEOPLE.

On April 1, 2011, Michael Jordan and Yvette Prieto were in Las Vegas, Nevada for the 10th annual Michael Jordan Celebrity Invitational Celebration at the ARIA Resort & Casino. The Florida ceremony she and Jordan held was attended by many  famous people. 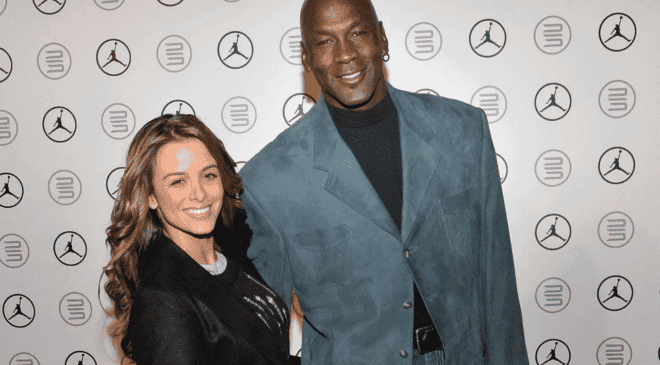 Prieto spent her early years in Miami with her family, despite the fact that she was born in Cuba. According to ESPN the Magazine, Prieto’s early life near the water sparked a lifelong passion for sailing. Because “Yvette loves them,” even though “he hates the water,” the pair has taken many sailing adventures over the years. She was also a model who walked the runway for Alexander Wang and others.

On April 27, 2013, the pair got married at the Episcopal Church of Bethesda-by-the-Sea. A fleet of tour buses carried their five-hundred invited guests to the Bears Club, a Jack Nicklaus-designed golf course where the reception was held.

Must Read: Is Chauvin Married: Why Did She Gave Divorce to Derek?

Michael Jordan wed Yvette Prieto, his second wife, in 2013. It is estimated that ‘the Ghost of Chicago’ spent around $10 million on the lavish wedding. 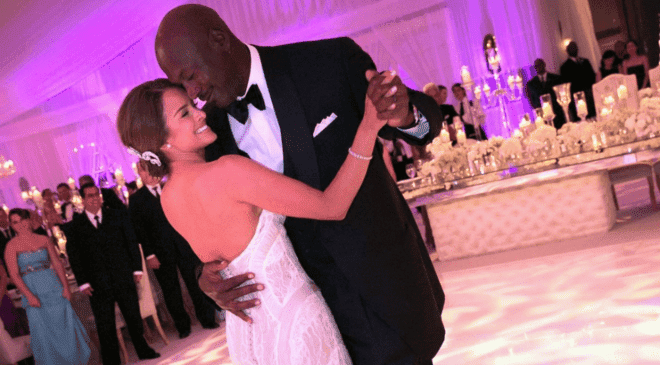 Luxurious nuptials took place on April 27, 2013 in Palm Beach, Florida. While the wedding took place at the Episcopal Church of Bethesda-by-the-Sea, the reception was held at the Bear’s Club in Jupiter. Jordan had 300 people to his and Prieto’s wedding. Famous people including Tiger Woods, Scottie Pippen, Patrick Ewing, and Spike Lee attended the wedding.

The reception for Michael Jordan’s wedding also featured a special performance by a number of famous musicians. The 14-time All-Star hoped that her wedding day would be the most memorable and special day of her life.

According to “The Insider,” “One the Ocean” by K’Jon was playing as Michael Jackson and Yvette shared their first dance. The tents had a lovely aroma, and the design showed a lot of thought. According to the information provided, the garden appeared to be more lush than any other. “You walked into the dining room and it looked like heaven.” the insider gushed. Moreover, thousands of candles were used to create an ethereal atmosphere in the tent.

Why Did He Break Up With Robin Givens?

In a 1989 profile interview for GQ Magazine, Jordan discussed his past relationships and how he learned that women were only interested in him for his money rather than for love. Robin Givens, who supposedly dated Michael Jordan in 1989, recently ended their relationship and married Mike Tyson, a professional boxer. 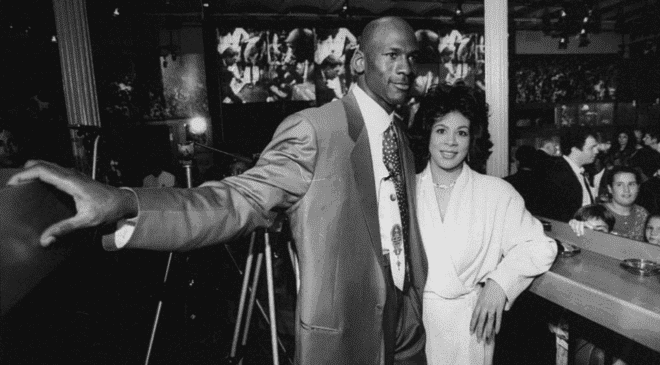 The divorce and the turbulence in Given and Tyson’s relationship in 1988 received terrible media attention.

On the way home from an event with his current girlfriend, Jordan heard the news while riding in his limousine. By the time Jordan finished reading about the ugly breakup between Tyson and Givens in the newspaper, he knew he’d escaped unscathed.

“It got tired in five, six days,” Jordan told David Breskin of GQ Magazine. ” I could see it.” He saw that instead of dating men, she was dating expanding businesses. Jordan elaborated, saying, “Right now,” he says, “I don’t trust no one except my mother,”.