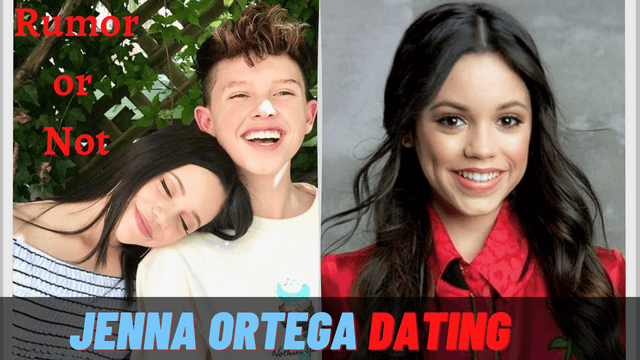 The official synopsis says, “Wednesday tries to master her growing psychic ability, stop a monster killing spree that has terrorized the local town, and solve the supernatural mystery that involved her parents 25 years ago, all while navigating her new and very complicated relationships at Nevermore.” But this is just a small (but powerful) part of Jenna’s impact on the entertainment business.

She was the star of the Disney Channel show Stuck in the Middle from 2016 to 2018, and she was also a big deal in the second season of the Netflix show You. She also starred in the 2021 HBO Max drama The Fallout with Shailene Woodley and Maddie Ziegler, as well as the 2022 movie Scream.

Fans want to know if Jenna is dating anyone because she has so much going on in her career right now. Here’s what’s going on with her love life.

Who is Jenna Ortega?

An American actress by the name of Jenna Marie Ortega. She got her start in the industry as a young performer, and her role as young Jane on the CW’s comedy-drama series Jane the Virgin propelled her to fame (2014–2019). Her breakout role as Harley Diaz on the Disney Channel show Stuck in the Middle (2016-2018) earned her a nomination for an Imagen Award. She also voiced Princess Isabel on Elena of Avalor from 2016 until 2020.

In 2019, Ortega portrayed Ellie Alves in the second season of the Netflix thriller series You and starred in the Netflix family film Yes Day. She became known as a scream queen after starring in the teen drama The Fallout (2021) and earning critical acclaim for her performance. She then went on to star in the slasher films X (2022) and Scream (2022). Ortega portrayed Wednesday on the Netflix fantasy series that bore his name in 2022.

A well-known singer named Jacob Sartorius was also said to be Jenna’s boyfriend along with Asher. Her fans were thrilled about their relationship because they seemed to love each other a lot and looked great together. But was that true, or were those just what other people thought?

Even though they seemed to get along well, they never went out on a date or started a relationship. Since the rumor started, it seemed like everything they did was like what a real couple would do. Jacob also wrote on Twitter that he “had a crush,” but he didn’t say the name of the girl.

Read More: Justin Bieber Dating: Get to Know the Relationship Status of the Singer!

Well, if that was the case, it made sense that Jacob tweeted it just a few days after being photographed with Jenna in New York City. They posed for several photos together. Jenna Ortega said she didn’t date either Asher Angel or Jacob Sartorius when she was on the Just Between Us podcast with Bailee Madison and Kaitlin Vilasuso last year.

Even though Jenna and Gwendoline from Game of Thrones are our ideal couple, they are not legally wed. Regarding the origin of this rumor, it might have something to do with the cheeky scream queen referring to Gwendoline as her “wife” during a cast interview for TV Insider on Wednesday.

Jenna looked into the eyes of her Wednesday co-star, Principal Larissa Weems, who handed her the microphone, and then she said, “Thank you very much, woman.”

“My lady. Love to you, “She went on. Jenna clarified her remark as Gwendoline giggled and the interviewer appeared perplexed. Because she is my wife, I apologize if my nickname for her is disrespectful.

You May Also Like: Katy Perry Dating: How Long She Has Been in Relationship?

Clearly, the “clarification” was delivered with more humor. She apologized to Gwendoline, looking at her with such distress, “I get so, I get — my heart.” Clearly, someone is smitten. (Sorry, we’ll be writing some romantic fanfiction; don’t bother us.)

Jenna Ortega starred in the Disney Channel show Stuck in the Middle. She also voiced Princess Isabel on Elena of Avalor from 2016 until 2020. She became known as a scream queen after starring in The Fallout (2021) and Scream (2022). There are no indications that she is currently dating anyone special. Prior to that, she was linked to singer Jacob Sartorius.

The two never confirmed or denied an official relationship. Jenna Ortega was rumored to be dating her co-star while filming Stuck in the Middle. She referred to Gwendoline Christie as her “wife” during a cast interview.