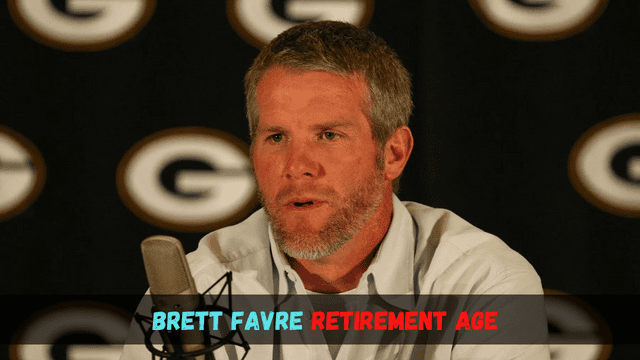 Brett Lorenzo Favre is an American football quarterback who played for 20 seasons, mostly with the Green Bay Packers, in the National Football League. From 1992 to 2010, Favre played in 321 straight games, 297 of which were regular season games. This is the most in the history of the league.

How Old Was Brett Favre When He Retired?

As happens to most athletes as they get older, Brett Favre’s performance got worse as he got older. Favre said he was retiring early in 2008, so the Green Bay Packers sent him to the New York Jets before the 2008 season.

After one year in New York, Favre signed with the Minnesota Vikings and finished his career there. In 2010, he started 13 games and went 5-8 with 11 touchdowns and 19 interceptions, which was a bad way to end a great career.

After years of rumors from the media and fans, Favre told the NFL in January 2011 that he was done playing football. When Brett Favre quit, how old was he? Brett Favre stopped playing football when he was 41, but that didn’t stop people from talking about the possibility of him coming back.

How Many Times Did Brett Favre Retire?

Brett Favre retired three times from his professional football career. The first time he retired was in 2008 but rumors were spread in 2002. But he join the next season and played for the New York Jets.

Retirement sucks during playoffs but I’m ready to take on a new game! My agent thinks I sh… http://t.co/m9WvIiF8zx

But Brett did not get much success so he decided to retire again. However, in the next season, he postponed his retirement and joined the Minnesota Vikings.

Where is Brett Favre Now?

Brett Favre hasn’t played in the NFL for the better part of a decade. What has he been up to since he hung up his cleats? First, let’s ask how old Brett Favre is. The 52-year-old has stayed out of the spotlight for the most part.

As seen on iSpot.tv, Favre still does commercials and shows up in the media every so often. Favre, on the other hand, hasn’t gone into broadcasting like many quarterbacks of his level have.

Packers News says that Favre is enjoying his life after football by doing things he couldn’t do while playing, like traveling. Favre now lives in Sumrall, Mississippi. He also goes to his kids’ sports games and has done other business things, like hosting a radio show for SiriusXM.

During the COVID-19 quarantine, Favre has been in the news a few times. In an interview with CBS Sports that is on YouTube, he talked about how his daughter and her friends make TikTok videos. Things went from bad to worse, and Favre ended up dying his grey hair orange and telling the interviewer that he might try pink next.

Read More: How Old Was Zac Efron in High School Musical? Was Zac Really a Singer?

Take a Look at Brett’s Career!

Lorenzo got a football scholarship to play defensive back at Southern Mississippi University. He wanted to play quarterback, though. So, he started his first year of college as the seventh-string quarterback.

In the 1991 NFL Draft, the Atlanta Falcons picked Lorenzo in the second round, with the 33rd overall pick. This was the start of his professional career. So, in July 1991, he signed a three-year, $1.4 million contract with a $350,000 signing bonus.