James Mangold will be directing the fifth installment of the Indiana Jones series; Mangold, Jez Butterworth, and John Henry Butterworth wrote the script. The fifth and last film in the Indiana Jones franchise will be released. It is the only installment in which neither the story nor the direction was handled by Steven Spielberg; instead, Spielberg served as producer.

It features Antonio Banderas, Phoebe Waller-Bridge, Mads Mikkelsen, Boyd Holbrook, Thomas Kretschmann, and John Rhys-Davies in addition to Harrison Ford, who plays Indiana Jones once more in his fifth and final performance in the role after more than 40 years.

What is the Renewal Status of Indiana Jones 5?

Harrison Ford’s return to the famous role is finally clearly seen in the first official batches of photographs for the much-awaited Indiana Jones 5. The brand-new photos are courtesy of Empire Magazine’s most recent piece on the movie, which also teases Indiana Jones 5’s plot, in which the renowned archaeology professor will once more face off against a group of Nazis.

Indiana Jones is back!

The photos feature both Harrison Ford as Indiana Jones and Mads Mikkelson as the evil Voller, a character modeled after the actual Nazi Wernher von Braun, a post-World War II NASA engineer.

On June 30, 2023, Indiana Jones 5 is scheduled for theatrical release. Produced by Steven Spielberg, the creator of the Indiana Jones franchise, Frank Marshall, and Simon Emanuel, Indiana Jones 5 will see John Williams return to compose the music, continuing a musical journey that began with Raiders of the Lost Ark 40 years ago.

What Could Be the Storyline of Indiana Jones 5?

It’s a tale that combines fedoras, fascism, and fact, with a key action scene taking place at the Apollo 11 ticker tape parade in New York on August 13, 1969, to honor the astronauts.

In addition to Boyd Holbrook’s evil Klaber getting caught up in the historic celebration (“I’m a lapdog to Mads, and a crazy one at that,” the actor says), the scene served as the inspiration for Sam Hadley’s cover illustration for Empire’s subscriber-only issue. 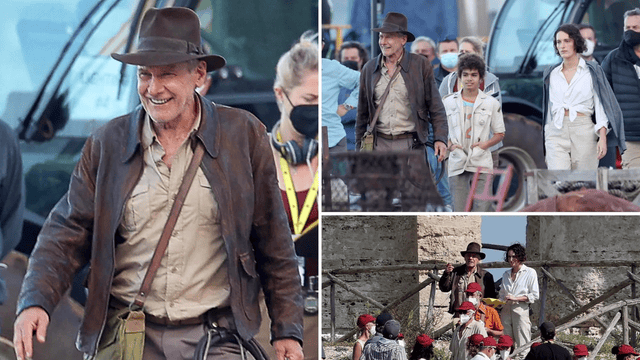 Who Will Be in the Cast of Indiana Jones 5?

(An American explorer and archaeologist.)

(The Indiana Jones goddaughter. Her role was dubbed “an explorer and a femme fatale” by composer John Williams.)

(An ex-Nazi who is now a NASA employee working on the moon landing programme and wants to obtain the movie’s MacGuffin so he can make amends for some errors from the past and change the world as he sees fit.)

Is There Any Trailer for Indiana Jones 5?

As previously announced, on September 10, 2022, during the D23 Expo, Indiana Jones 5’s first trailer made its appearance. Please don’t hold us to our speculation or hope. The video largely consisted of action sequence teasers from the film, including a variation on the famous Indiana Jones joke in which the hero uses his whip to fight off some thugs but they respond by shooting at him.

After enduring a number of setbacks during its pre-production and filming phases, producer Frank Marshall took to Twitter to confirm that production on Lucasfilm’s long-awaited fifth and final installment to the Indiana Jones franchise has finally been completed. Marshall shared the news with a photo of a crew hat bearing the logo, “Indy.”

The untitled Indiana Jones 5 is currently slated to arrive in theaters on June 30, 2023. It will be debuting in the same month as other high-profile projects such as Shazam! Fury of the Gods and Transformers: Rise of the Beasts, have both completed their principal photography as well.