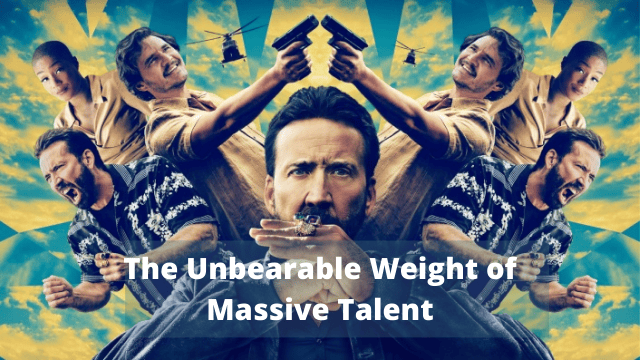 Tom Gormican directs The Unbearable Weight of Massive Talent, a 2022 American action-comedy film based on a script co-written with Kevin Etten.

On March 12, 2022, The Unbearable Weight of Massive Talent had its global premiere at South by Southwest, and Lionsgate distributed it in the United States on April 22, 2022. The film earned favorable reviews from critics, who praised Cage and Pascal’s performances and chemistry.

What Is the Storyline?

Actor Nick Cage, unfulfilled and on the verge of bankruptcy, accepts a $1 million invitation to attend a wealthy fan’s birthday celebration. When a CIA officer hires Cage for an unconventional operation, things take a completely unexpected turn.

He quickly finds himself channeling his most renowned and beloved personalities to save himself and his loved ones after taking on the role of a lifetime.

Nicolas Cage passionately kissing a younger version of himself on screen was not on my list of things to see in 2022. That’s not even the strangest sequence in Tom Gormican’s new film The Unbearable Weight of Massive Talent.

This weird, absurd, and at times extremely silly meta film stars Nicolas Cage as a fictionalized version of himself.

But, despite everything, it’s a lot of fun to see. And, despite the low standard, it is without a doubt the craziest Nicolas Cage film. 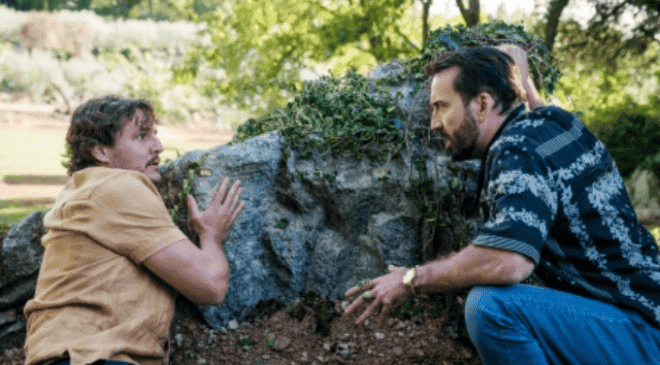 Nicolas Cage plays a washed-up movie star named…well, Nick Cage, who finds himself in the unwelcome situation of being utilized by the CIA to spy on a crime lord (Pedro Pascal), who also happens to be his biggest admirer.

The two are joined by a cast that includes Sharon Horgan as Nick’s fake ex-wife, Tiffany Haddish and Ike Barinholtz as CIA officers, and Neil Patrick Harris as actor Richard Fink’s agent.

There are references to Moonstruck, Gone in 60 Seconds, Face-Off, and Con Air, as well as gags about Nicolas’ “spending habits” (for the uninitiated, Nicolas spent a $150 million fortune in real life and ended up in debt). For pop-culture fans, the film is a rich mine of Easter Eggs.

But there’s a lot more to it. It’s a well-crafted picture with funny dialogue and situational natural humor. Granted, it is heavily reliant on its lead actor’s star power and charisma, but it makes the most of it.

Is The Unbearable Weight of Massive Talent a Real Story?

Yes and no. Nicolas Cage came up with the idea for the movie, which is a meta-action comedy. Many parts of the movie make references to Cage’s real life, like the many movies he has been in over the years.

However, “The Weight of a Massive Talent” isn’t based on any real-life events. Cage plays a fictional version of himself because Gormican and Etten wanted to pay homage to the actor’s filmography, so they wrote the script with that in mind.

Nicolas Cage first turned down the role of a fictionalized version of himself several times before agreeing to be in the movie.

This movie is about a character called “The Unbearable Weight of Massive Talent.” At its heart, it wants to make a character who is more like an arrogant real-life actor. He is not like Nicolas Cage, who has said he was afraid to play this role. Nic Cage’s family is very different from the real-life actors.

Cage’s character and how he can be seen are later used to make money from the movie. At the same time, it shows a version of him that doesn’t exist.

Is it based on a True Story?

The Unbearable Weight of Massive Talent is not a Real Story.

When Was ‘The Unbearable Weight of Massive Talent’ Released?

The Unbearable Weight of Massive Talent was released on 22 April 2022.