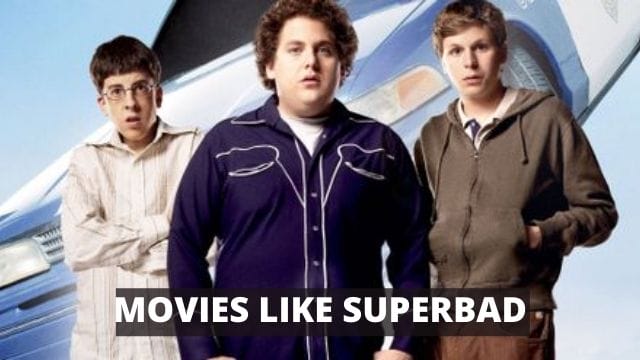 Movies Like Superbad That Are Worth Watching for a Laugh!

Best Movies Like Superbad: Greg Mottola‘s Superbad, which came out in 2007, was a generation-defining, culture-calcifying comedy.

Judd Apatow’s masterpiece opened the way for a new generation of comedians, from writers Seth Rogen and Andrew Goldberg to performers Michael Cera and Jonah Hill.

If you like Superbad and want to watch more adolescent comedies, we’ve got you covered. Put down your weird drawings and check out these seven flicks to see after Superbad.

Adventureland is a considerably quieter and perhaps richer affair than Superbad, despite the fact that it is directed by the same person.

Jesse Eisenberg is an aimless college grad who takes a summer job at a local fair, meets all kinds of interesting characters played by Martin Starr, Kristen Wiig, and Bill Hader, and just might find a life-affirming spark with fellow drifter Kristen Stewart, set in the 1980s.

In this gently, warmly drawn film, the two unconventional adolescent idols find intriguing chemistry, the kind of dramedy that opens your heart and makes you homesick for a moment that never quite lived.

Booksmart creates its own character, one that appears lovingly in conversation with high school movies of the past while proposing a welcoming future for the genre.

Booksmart is the type of picture that will spark global awareness in friendships; a “that’s us!” watershed.

In Dazed and Confused, you get thrown into the deep end of “being a high schooler about to graduate,” which is an example of a hangout movie, a high school movie, and a “one crazy night” movie. It’s messy, but it’s worth it.

Richard Linklater, one of the best people in the world at capturing the subtlety and drama in “ordinary human conversation,” makes this film with a lot of young actors, including Ben Affleck, and Milla Jovovich, and, of course, Matthew McConaughey.

Emma Stone took down the boys from Superbad with ease. It was three years after that when she starred in her own teen sex comedy called Easy A. It’s a mix of Superbad and Mean Girls with a little bit of Heathers thrown in for good measure.

It’s a tart-tongued image: effervescent but also abrasive, approachable but also greedy. In this movie, The Scarlet Letter’s main idea is turned into a funny joke about sex positivity.

As you might expect, Stone owns the lead. Emma Stone is a great comedic actor.

But, like Superbad, the picture is interested in much more than the premise’s and cast’s first shock value. The unexpected thought that being good is good even while the ever-changing world of sixth grade surrounds you and demands you get a bit bad to grow up is presented in Good Boys. This one has a heart for days!

During the 1990s, Home Party is a favorite. It asks, “What if there was a house party?”

Kid ‘n Play are the hosts of this home party (Christopher Robinson and Christopher Martin).

It’s time for the party’s epic ending. In Youth in Revolt, Cera plays a high school student who isn’t sure what to do. This part foreshadows his later, more intentionally controversial career choices.

To get away from his mother Jean Smart and stepfather Zach Galifianakis, Cera asks Portia Doubleday to help him make his rebellious, bad-boy alters ego “François Dillinger” under the watchful eye of filmmaker Miguel Arteta.

It’s not like the rest of the list is crazy. This bold theatrical style is usually used with a real sense of danger and gloom.

READ MORE:-8 Movies Like Gone Girl: You Must Watch if You Are Die Heart Fan of Dark Tales!