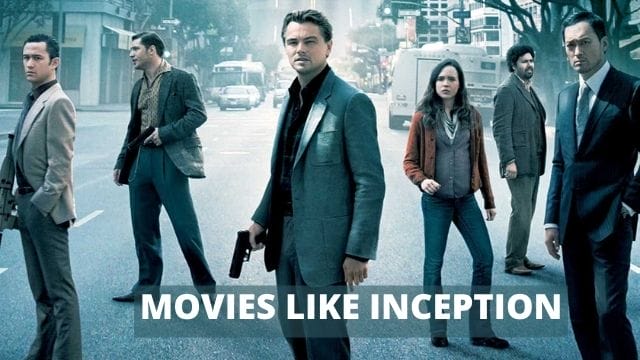 20+ Movies Like Inception: Christopher Nolan is the mastermind behind some of the most mind-blowing films ever made.

No other film properly exemplifies the great director’s technique than Inception, which approaches every plot as if it were a riddle waiting to be solved.

What is the movie Inception about?

2010’s sci-fi picture about dream builders who plan heists within a target’s head is wonderfully shot, and the story is so convoluted that the resolution is still debated.

If you’re looking for films like Inception, you could be attracted to films with twist endings or open endings.

After all, half the fun of Inception is unraveling the dream-within-a-dream structure. Cobb (Leonardo DiCaprio), Arthur (Joseph Gordon-Levitt), and Ariadne (Elliot Page), an architect who specializes in dreamscapes, set out on a dangerous expedition to clear Cobb’s name.

But their goal is deadly, and if they don’t wake up in time, they’ll all die. In that way, Inception is unique.

Few films depict dreams as nuanced as the DiCaprio-led fan favorite. Then there are the puzzle box flicks that invite you to put on your detective hat. (Yeah, some of them, like Inception, are Nolan films.)

Like Inception, all of the films on this list defy conventional narrative. These films include unexpected turns, innovative themes, and jaw-dropping imagery. Above all, they tell captivating tales, which is why Inception is a contemporary classic.

If you want a puzzle worthy of Inception, watch these films.

Memento, while being one of Nolan’s first pictures, is full of his signature aesthetic. Because the film is not given in chronological sequence, the spectator is required to participate actively in piecing together the tale.

Because the film depicts a guy (Guy Pearce) attempting to avenge his wife’s death while also battling with a rare form of memory loss that damages his short-term memory and complicates his search for the person who killed his wife, this format fits brilliantly.

Tenet is possibly Nolan’s most abstract film yet. After all, the protagonist, played by John David Washington, is simply referred to as the Protagonist.

In a word, the film follows a man on a mission to stop World War III from happening. The tale is anything but straightforward, thanks to some truly mind-boggling time travel turns.

Before we leave Christopher Nolan’s filmography, let’s have a look at The Prestige, a period drama set in Edwardian London about two rival magicians played by Hugh Jackman and Christian Bale.

While it may appear to be a straightforward statement, the film contains numerous sci-fi elements that propel the plot of this extraordinary tale of obsession and vengeance.

DiCaprio starred in another film with a controversial finale the same year that Inception was released. Teddy, DiCaprio’s US Marshal character, is trying to solve a mystery at an isolated asylum amid a horrible storm in this evocative picture directed by Martin Scorsese.

Teddy realizes he may be in danger as the storm worsens and the individuals in charge of the asylum become increasingly reticent to answer questions.

When it was first released, The Matrix was nothing short of revolutionary, and the original is still considered one of the best science fiction films ever created.

Even if you know the premise, the film is worth seeing again to marvel at the pioneering spectacular effects and creative storytelling that had spectators wondering if they, like Keanu Reeves’ Neo, could be in the Matrix.

READ MORE:-The Matrix 5 Release Date: Everything You Need To Know!

Check this list to fulfill your hunger for puzzle worthy films: –

READ MORE:-8 Movies Like Gone Girl: You Must Watch if You Are Die Heart Fan of Dark Tales!

Movies Like Superbad That Are Worth Watching for a Laugh!