Bing-watchers the prophet has spoken, the streaming giant Netflix has announced that the record-breaking crime- thriller series helmed by Laura Linney and Jason Bateman is underproduction and will be gracing our screens soon. Ozark first premiered on Netflix on July 21, 2017, and since then it has never left the ‘ Most watched Netflix originals’ table.

The series has its inception in the summer of 2017, sparking repeated parallels with Vince Gilligan’s Breaking Bad, which at the time was a huge win. Now ‘Ozark’ is finally taking a step toward the end. There’s hasn’t been an official premiere date keep your fingers crossed.

However, the director of the show Amanda Marsalis recently shared an update on her Instagram that the team has nearly done 4 episodes for the upcoming season. Here’s the post;

Only one episode left for production. Once that is done, we can expect some more updates regarding the trailer, teaser or the release date of Ozark Season 4.

Ozark Plot: What’s The Show About?

When it comes to money -laundering, Marty Bryd and Wendy Byrd don’t have it easy. The story centers around Marty, Bryd and who just moved into the small town of Missouri, Ozark to launder cash for a, You guessed it! A Mexican Drug cartel.

The third installment garnered a total of 18 Emmy nominations last year, including one which Julia Garner received for Best Supporting Actress in this Netflix original crime-thriller. 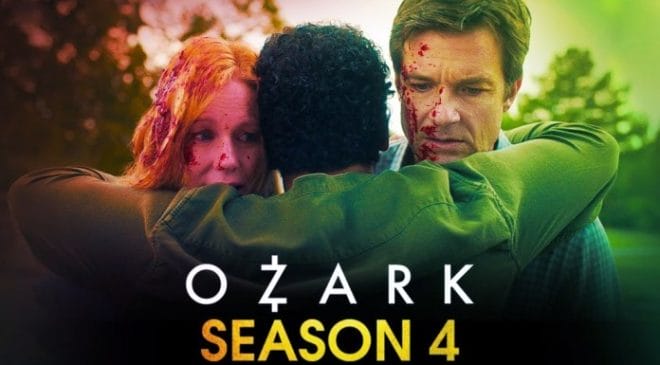 Ozark Season 4 Plot! What Will Happen Next?

Ozark season 4 has been parted into two sections and champions the last season of the series. While no premiere date for the forthcoming episodes has been set, there is still a lot to discover before a formal announcement is made. We’ve got some new casting news and a few plot teasers to keep you busy. There’s also been a couple of production changes.

Season 4 will pick up right from where season 3 left. In season 3 the Byrdes witnessed Helen’s death when Omar Navarro shoots her in the head. It’s possible that the final season will tie up all the loose ends as it is the final season. The Byrdes will face other problems besides Navarro as Ruth has changed sides.

Showrunner Chris Mundy hinted few details regarding the final season. Maybe, Ruth will get what she wants. Does she want to create something of her or does she has something else in mind? Since it’s the final season, the show is going to clear out the mist.