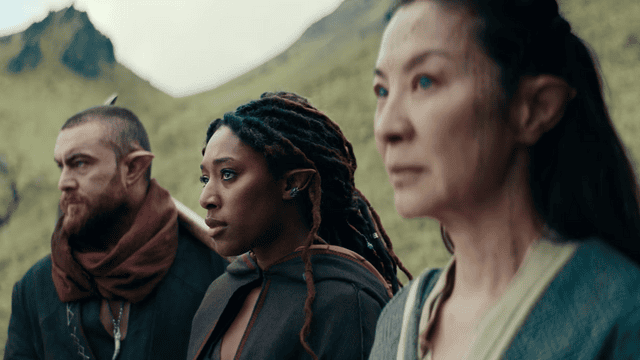 The witcher blood origin ending explained: Witcher: Blood Origin features a surprising end cameo from Ciri alongside Jaskier. Why is another important character in the show, and what does it represent for the franchise? Since the events of The Witcher take place hundreds of years in the past, many fans assumed that Witcher: Blood Origin would feature few if any of the show’s primary characters. Except for Jaskier, who was implied to be a member of Blood Origin in promotional materials despite being a character who appeared in the series after its conclusion.

The first few episodes of Witcher: Blood Origin explain how and why Jaskier appears in the show, which is mostly set before his birth. However, the show also includes a hidden appearance.

As her trademark white hair is obscured by a hat in the scene, some viewers may not have recognized Ciri when she appeared in the post-credits sequence of the series finale. This appearance offers a glimpse of what’s to come in The Witcher’s Season 3 and beyond, but only for those who figure out that the mysterious young woman is Ciri.

As Seanchai, a shapeshifter played by Minnie Driver, told Jaskier (Joey Batey), the Witcher bard, it all happened 1,500 years ago courtesy of Princess Merwyn, a new character (Mirren Mack). It happened because of Merwyn and her Chief Druid, Balor (Lenny Henry). Merwyn, the princess of the elf kingdom that would become Cintra, was tired of being ignored. That’s why she teamed up with Balor to assassinate her kingly brother and his supporters and seize the kingdom.

Merwyn craved power for another reason. Merwyn believed she was the finest at ruling and achieving peace. Because of that, she wanted to share her gift with the world. We have a colonizing queen. Balor and his second-in-command Eredin (Jacob Collins-Levy) went along with her grandiose plans to one day double-cross her and conquer the kingdom. For now, we’ll push them aside, but this union was always shaky.

Even if this was criminal, the residents of this badly controlled nation scarcely needed a reason to rise up. Thus, our seven-member team was created to overthrow the throne. Let’s the review: Éile (Sophia Brown), a former elite warrior of the Queen’s guard and bard known as the Lark; Fjall (Laurence O’Fuarain), a warrior part of a clan dedicated to protecting the princess; Scion (Michelle Yeoh), the last member of Ghost Tribe, a band of sword-elves; Brother Death (Huw Novell), a hulking and feared warrior; Syndril (Zach Wyatt) and Zacaré (Lizzie Annis), two sorcerers who are Celestial Twins; and Meldof (Francesca Mills), an axe-wield They all loathed the throne and sought to kill the Queen and her sorcerer before using the monoliths to travel to another realm.

The end of the elves

In The Witcher’s depiction of the world, elves are at the very bottom of the social ladder. Elves on the Continent have been reduced to a pitiful remnant of their former selves, and they now exist in secret, hiding from humanity while quietly plotting revenge. The events depicted in Blood Origin show the elves as powerful rulers of the Continent before a thousand-year conflict tore the nation apart.

The seven, the show’s protagonists, have been wronged by the new empire and seek retribution against its empress, Merwyn. They infiltrate Xin’trea after the revolution that unites the three elf kingdoms into one and begins their scheme to overthrow Merwyn.

The elf smallfolk rise against the empire and take over the city after a stirring speech by Éile, the show’s de facto lead. But in the meantime, the seven split off, with each member responsible for a different part of the assault. Éile confronts Merwyn as Scian, Meldof, and Brother Death battle with the guards defending the empress. After a heated argument, Éile stabs Merwyn. The queen retreats to her royal room, where she is assassinated in full front of the invading elf army. The elven empire’s glory days are numbered, despite the fact that the commoners were able to topple it.

Read:Alice in Borderland Season 2 Ending Explained: Who is Mira in the End?

Magi Syndril and Zacaré try to demolish the monoliths Chief Druid Balor has been using to open portals to other worlds while Éile deals with Merwyn. These monoliths play a significant part in season 2 of The Witcher, providing context for the introduction of monsters to Europe.

After offering his apprentice and surrogate daughter to a mystery power from another world and taking mastery of chaos magic, Balor confronts them while guarding the monolith. Using her magic, Zacaré joins Syndril and Balor into one being, and then Syndril channels Balor’s chaos magic into a beam that smashes the monolith.

However, there are unanticipated consequences to destroying the monolith. When this dimensional rift is breached, many planets collide in an event known as the Conjunction of the Spheres. The Conjunction ushers in human beings to the Continent, along with a slew of terrifying new creatures that will cause havoc for decades, if not centuries.

Related: A Man of Action Ending Explained: Who Wants Lucio to Die?

The first witcher is born in Episode 3. While Balor uses an extraterrestrial monster to start his coup and wipe out all the kingdoms, the monster eventually becomes Merwyn’s personal bodyguard and stays on the Continent. The seven decide they need to make their own monster to fight the one they’ve encountered. Although Éile is the one who initially offers to undergo the treatment, Fjall ends up having surgery. It almost takes his life, but he pulls through and becomes the first Witcher on the continent.

Eredin, one of Xin’trea’s Captains, is a recurring adversarial figure in all four episodes of Blood Origins. He’s a key player in Balor’s coup, and he and Merwyn hatch a plan to get rid of the druid and expand their empire across the multiverse by stealing monoliths.

Balor abandons Eredin for dead after casting him and his troops into another realm on their final mission. Eredin, though, is shown in his final moment on a planet that is red and bleak, which will be instantly recognizable to fans of The Witcher. Eredin, all by himself and close to death, digs up a skull and wears it as a helmet.

As the eternal leader of a magical elf cavalry and the primary enemy in CD Projekt’s critically acclaimed game The Witcher 3: Wild Hunt, Eredin may be recognizable to series fans. Blood Origin’s inclusion of the King himself confirms that the otherworldly cavalry will complicate things for Geralt, Yen, and Ciri in the upcoming third season of The Witcher.

The post-credit scene references an event from the first season of The Witcher. Ciri, in boy’s clothes, joins a group of other children for some street fun. She turns around, perceiving something, but seeing nothing. Blood Origin, however, reveals that there is someone there: Avallac’h, a young mage apprentice who served as Merwyn’s counselor throughout the series. It appears that he uses the monoliths to go back in time and prevent the attack on Xin’trea, which he then lives through.

The scene after the credits suggests Avallac’h will have a significantly larger part in the upcoming third season of The Witcher. According to the canon, he is one of Ciri’s ancestors and a supremacist elf with the ability to warp across dimensions and times.

It seems obvious at this point that Netflix is taking its own approach to interpreting The Witcher’s history, thus the decision to alter Avallac’h’s origin makes sense. His motivation is unclear, but he seems destined to play a major role in Season 3 of Ciri’s journey.

You can now watch The Witcher: Blood Origin on Netflix.