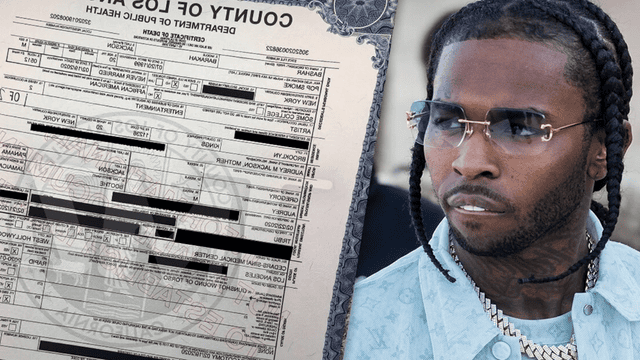 Pop Smoke Death: After Being Shot, a Rapper Was Kicked to the Floor!

American rapper and actor Bashar Barakah Jackson, better known by his stage name Pop Smoke. Pop Smoke, who grew up in Canarsie, Brooklyn, released his first song, “MPR (Panic Part 3 Remix),” toward the end of 2018. In 2019, Pop Smoke’s “Welcome to the Party” and “Dior” singles skyrocketed to success, catapulting him to stardom.

He frequently worked with drill artists and producers from the United Kingdom, who reintroduced the style as “Brooklyn drill,” using harsher, more minimalist instrumentation than the original Chicago drill.

Producer Rico Beats, fresh off his success, gave Steven Victor his first listen to Pop Smoke in April of 2019. Later, Victor had Pop Smoke ink a deal with his record label, Victor Victor Worldwide, as well as Republic Records. In July 2019, he dropped his first official mixtape titled Meet the Woo.

Released on February 7, 2020, his second mixtape, Meet the Woo 2, debuted at number seven on the Billboard 200, making it the rapper’s first top-10 project in the United States.

Four teenagers set out on a road trip to Jackson’s Los Angeles home on February 19, 2020. In October 2021, now 20-year-old Corey Walker informed authorities that during the break-in, he had given weapons to his three accomplices but instructed them not to use them.

In court on October 20, 2021, Walker claimed that he advised the intruders to use a flower vase instead of a rifle and that he had not entered the house. The three remaining teens broke into the house through a window where Jackson’s girlfriend Amelia Rose was resting. She reported seeing males in ski masks who yelled at her to “shut the f**k up” to Los Angeles Deputy Christian Carrasco. Is death what you seek?

A woman who was with Pop Smoke 💨 the night of his untimely death spoke out on his last words 💙💫♿️#PopSmoke #LLPopSmoke #Woo pic.twitter.com/3UU8EFQ3ol

While Jackson was in the shower, they broke in to take his gold chain and watch. According to Rose, she heard a gunshot and ran out of the room as the men ran away, only to discover Jackson lying at the foot of the stairs.

Jackson was taken to Cedars-Sinai Medical Center in West Hollywood after she called 911, but he was pronounced dead there.

How did the teenagers find him?

In the end, an Instagram photo was the deciding factor.

The Amiri sent Jackson a gift bag the day before he was murdered. Jackson often sang about the luxury apparel label, Amiri. His boss called him to tell him to take down the photo of the gift bag he had put on Instagram since it revealed the address, but it was already too late.

Teens, according to detectives, showed up at the residence twice the next day after obtaining the address from the Instagram post. Carrasco initially claimed to have seen them going up to the house, but Walker later confirmed that four people had been there and that two of them had returned after Jackson returned home and the teen had shot and killed him.

Also Read:  Is Drew Carey Married: What Was the Cause of Her Girlfriend’s Death?

In a Genius interview, he revealed that his artist name Pop Smoke is a combination of Poppa, a name given to him by his Panamanian grandmother, and Smocco Guwop, a nickname from childhood pals and it was also his old Instagram name.

He initially attempted rapping during a 2018 visit to a Brooklyn recording studio with Jay Gwuapo. Jackson recorded a single in late 2018 named “MPR (Panic Part 3 Remix)” while rapping over a rhythm from 808Melo’s YouTube channel. On January 28, 2019, he released “Flexin'”. Meanwhile, Jackson became close with Rico Beats, a producer who had connections to Steven Victor, a label executive.

The three set up an interview, and in April 2019, Jackson signed with Victor Victor Worldwide and Republic Records. Jackson’s breakthrough hit, “Welcome to the Party,” produced by 808Melo, dropped on April 23, 2019. Several reworkings of the song were done afterward, with Nicki Minaj and Skepta appearing on the commercially released versions.

On July 26, 2019, Jackson dropped his first official mixtape, titled Meet the Woo. Jackson dropped a string of tracks between October and December of 2019; these included the collaborations “War” (with Lil Tjay) and “100k on a Coupe” (featuring Calboy).

Taylor Swift House Tour: Have A Look from Inside!