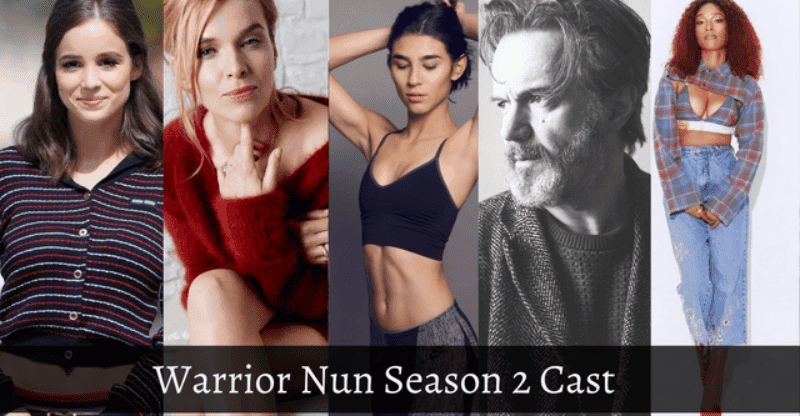 The American fantasy drama streaming show Warrior Nun is based on the comic book character Warrior Nun Areala by Ben Dunn. It was made by Simon Barry. When Netflix gave the production a series order for a first season, the idea was rethought as a TV show.

Several places in Andalusia, Spain, like Antequera, where the headquarters of the made-up Order of the Cruciform Sword were filmed, are used for filming. Alba Baptista, a Portuguese actress, plays Ava Silva, a quadriplegic orphan who finds out she has supernatural powers that force her to join an ancient order of warrior nuns. Baptista narrates the show and plays Silva.

Let’s Have a Quick Glance at Warrior Nun Season 2

Who is Playing the Lead Role in Warrior Nun Season 2?

Alba Baptista is a Luso-Brazilian actress. . In her home country of Portugal, she began her career with the show Jardins Proibidos. She then played leading roles in a number of Portuguese TV shows and movies, including A Impostora, Filha da Lei, A Criaco, and Jogo Duplo. She has been in the Netflix show Warrior Nun since 2020, which was her first English-language role.

She will play Sister Mary in the second season of the show Warrior Nun. Toya Turner is known for her roles in Warrior Nun (2020), Incredibles 2 (2018), and Easy (2016). She has a lot of potential as an actress and is very good at what she does.

Thekla will play the role of Jillian Salvius in Warrior Nun. Her full name is Thekla Simona Gelsomina Reuten and she is a Dutch actress. Thekla first came to wide international attention with her captivating role of Lotte in the Oscar-nominated film Twin Sisters / De Tweeling, which went on to be a hit with critics and film lovers worldwide.

Lorena plays Sister Lilith in the Netflix comic book show Warrior Nun. Lorena Andrea was born in London. Her parents were from Spain and Colombia. Andrea has been in a number of short films that have won awards, and her first feature film was Papillon. In No Man’s Land, a Western/Action movie set in Texas in the late 1800s, Lorena was cast as the female lead, Lotsee, opposite Chris Route in 2018. All of Lorena’s stunts in this movie are done by her herself.

What is Warrior Nun All About?

The story of Warrior Nun is about a 19-year-old woman who wakes up in a morgue with a new lease on life and a sacred object stuck in her back. She finds out that she is now part of the ancient Order of the Cruciform Sword, which has been tasked with fighting demons on Earth. Powerful forces from both heaven and hell want to find and control her.