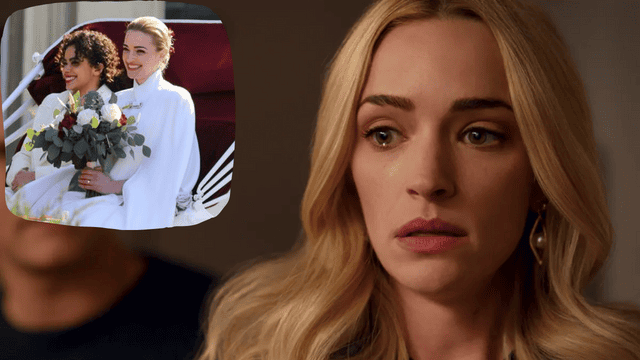 Ginny and Georgia season 2 ending explained: The Season 2 finale of Ginny & Georgia will be even more shocking than the Season 1 finale. After the events of the first season, Ginny (Antonia Gentry) and Austin (Diesel La Torraca) continue their escape from Georgia in the first episode of season 2. (Brianne Howey). Though Ginny and Georgia’s relationship does have its ups and downs over the season. And then, just when we think everything is hunky dory, the conclusion comes along and ruins our good mood.

Season 2 of the Netflix show centers on Georgia as she prepares for the wedding of a lifetime (well, technically her third wedding) to Paul Randolph, the mayor of their hometown (Scott Porter). The wedding serves as the climactic event, with an unexpected twist. Here, then, we break down the events leading up to Ginny & Georgia Season 2’s shocking conclusion.

A gunshot is heard towards the end of episode 8 in peaceful Wellsburg. In episode nine, though, we get additional information regarding what happened in episode eight.

Considering that Georgia Miller is not exactly known for telling the truth and that Georgia told Paul (Scott Porter) that she only had one gun in the house, Austin firing a gun may come as something of a surprise to him. Before Gil starts beating Georgia in the kitchen, Austin finds a revolver under her dresser and, after briefly considering it, returns it. Austin grabs the gun and shoots it since that’s the only option he can think of. Which is why there was a shot fired.

He didn’t murder anyone, thankfully; he only wounded Gil by hitting him in the arm and the kitchen wall. Georgia, being the formidable individual that she is, takes care of business quickly. She pulls out her needle and thread and repairs Gil’s wounds.

Read More: The Bad Batch Season 2 Episode 2 Ending Explained: What Went on in “The Planet Saleucami”?

She instructs Ginny to text Marcus and Max that the sound they heard was not a gunshot, and she has Austin create a painting to cover the bullet hole on their kitchen wall. As a result, Paul will have no idea what happened when he returns home. We’ll never know why nobody reported hearing a gunshot, but the Millers seem to have gotten away with it.

Is Georgia Going to Jail?

Aside from the gun dilemma, Georgia is also being pursued by a private investigator hired by Kenny’s ex-wife (Georgia’s dead husband’s ex-wife) who is looking into Georgia’s possible role in Kenny’s death. After everything becomes too much for Georgia, she decides to call off the wedding and pack up the kids and leave.

In any case, Ginny eventually manages to trick her mom into telling Paul the whole truth about their family history. She spills the beans on everything from the time she stole from his office to the time she hid a bullet hole behind the family photo he loves so much in the kitchen.

Paul finally snaps and leaves, but the next day he texts Georgia to meet him at his office, where he is already waiting with a lawyer, a police officer, and Gil. Paul informs Gil that he will be cut off from his family’s financial resources and that he will have to fight for custody of Georgia and Austin if he wants to see them. If a judge finds out that Gil doesn’t want custody because he’s an ex-convict, it won’t look well on either party. Paul admits to Georgia after he leaves that he is still deeply in love with her and hopes to marry her soon.

After Georgia called off the wedding out of fear, Ginny reorganized everything, and Georgia was escorted to the town hall by Joe’s horse Milkshake. They exchange vows, and Paul and Georgia are now husband and wife. Gabriel Cordova (Alex Mallari Jr.), a private investigator, and the Wellsbury police force interrupt the couple’s first dance to arrest Georgia for the murder of Cynthia’s husband, Tom Fuller.

Man who died from Georgia’s smothering in episode 8. If you don’t want to go to jail, don’t commit a crime. However, in Georgia’s defense, she committed this crime out of compassion for Cynthia, who said that seeing her husband in anguish had become unbearable.

A band playing “Going to the Chapel of Love” by The Dixie Cups plays as Georgia is led away from her wedding celebration. The second season of Ginny & Georgia ends with Georgia being taken away by police. It wasn’t exactly the fairytale honeymoon that Georgia had hoped for.

Do Paul and Georgia get married?

On Ginny’s suggestion, Georgia confronts Paul with the truth about his upcoming marriage: she sits him down and tells him he deserves to know who he’s marrying. It’s because of me that Gil ended up in jail. Because he was an aggressive scumbag, I falsely accused him of embezzling company funds.

To make ends meet, I took money from Austin and Ginny and used their credit cards and other financial aid to get by. I’ve pretty much just been a hustler and a criminal my whole life,” Georgia explains. She admits she stole money from the office but claimed she returned it all. She reveals to him that Kenny’s ex-wife filed a contest to the will and that Nick’s lover Jesse is actually a private investigator out to get her.

I was in a motorcycle gang, I was a shoplifter, and I lost custody of my daughter Ginny. Gil is angry at me for sending him to jail, and he is now after the money from your family. She says, “He’s been threatening me and wants to blackmail me once we’re married by telling you what I just told you.

Austin found another gun in the house and shot Gil, she says, before adding, “I don’t expect you to marry me.” It’s no surprise when Paul snaps, “I’ve gotta get out of here,” and promptly leaves.

Another flashback shows children Georgia, Ginny, and Austin pounding pots to loud music. Gil is pounding on the door of her apartment and shouting he will kill her because she is the reason he will be arrested.

Ginny & Georgia season 2: Will Marcus and Ginny get together?

Ginny and Marcus do not end up together by the end of the season. We do get to see them officially become a couple in episode 4 before Marcus dumps Ginny in episode 8. Marcus decides to end his relationship with Ginny because he can’t bear the thought of causing her any more pain.

It has been revealed this season that Marcus struggles with depression, a condition that can have severe consequences. Even though it hurts, he knows letting Ginny go is the best option since he doesn’t want to hold her back and make things tougher for her. Even though Ginny and Marcus don’t end up together, they do end up reconciling and deciding to be friends.