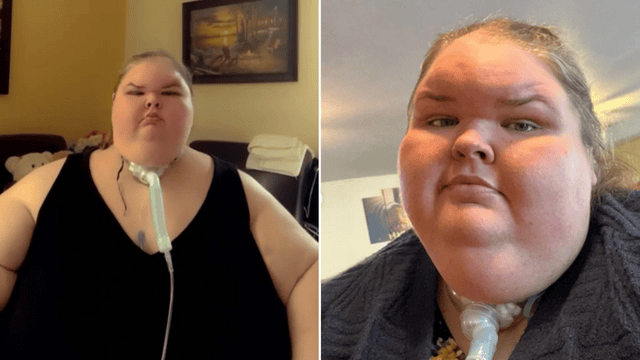 To find out if American TV personality and social media star Tammy Slaton is still alive, you’ve come to the right place. Find out where tammy Slaton is at this time and learn more by reading on.

Where Is Tammy Slaton Now?

Although Tammy Slaton’s advancement has been sluggish, it is encouraging that she shows no signs of giving up on her ambitions. And as we saw in the season premiere teaser, her brother, who has promised to join her in her weight loss mission, will help her keep her eye on the target.

We can only hope that after hearing Dr. Procter tell Tammy she has maybe five years to live and seeing the shocking number on the scale, Tammy has taken all the warnings to heart and is well on her way to making sure her greatest fears don’t come true.

We have no idea how Tammy is doing or whether or not her weight loss is significant. A recent Instagram post of hers featured a close-up of her face and the caption, “We’re under contract and we are not permitted to talk about any weight reduction [or] operations.” When pressed further, Tammy suggested that the never-ending stream of inquiries she fields daily takes its toll on her energy levels.

Since Tammy hasn’t shared any photos of herself and Jerry in quite some time on social media, even their relationship is up for debate at the moment. In light of Amy’s speculations (that he didn’t want Tammy to lose weight because he favored healthier girls), we can’t help but wonder whether this is related.

The life of Tammy Slaton continues. She has had to cope with people who indulge in body shaming their entire lives. She was bullied for her appearance and other reasons at school as well. Amy and Tammy Slaton have alleged that they grew up hearing insults like “ugly,” “fat,” “lazy,” and “dumb” from their mother and their brothers.

Unconditional love like that which they sought was only provided by her grandmother. Both Tammy and Amy felt like their grandmother cared for them like her own children. At the age of eleven, Tammy was left without a grandma. Then she was allowed to eat anything she wanted. And when she ran out of food at home, she would visit the church for a meal. Everything you need to know about Tammy Slaton is covered in this article.

Contrary to online reports that began circulating in late August of 2021, Tammy Slaton is not deceased. The photographs that Tammy shared in mid-August of herself with oxygen tubes attached seem to have sparked the rumors. After initially donning them beginning in late fall 2020 after being diagnosed with COVID-19 Wikipedia, she was seen not wearing them in a number of selfies taken before the end of July. After Tammy deleted all of her Instagram posts in late July, fans were already on edge when she later shared deletable images of herself vaping.

By mid-August, Slaton had resumed sharing selfies in which she wore oxygen, proving that the storm had been for naught. She quickly put an end to the speculations that she had passed away by posting many selfies to her Instagram account.

In addition to maintaining an active presence on Instagram, Tammy supposedly dated Phillip Redmond, better known as “Thebbwking,” a popular TikTok user. After Tammy broke up with Jerry Sykes, who she later found out was married, Metro reports that she and Jason began dating. The second season of “1000-lb Sisters” detailed the dissolution of the latter couple’s relationship. Sometime in the summer of 2021, she and Redmond split up.