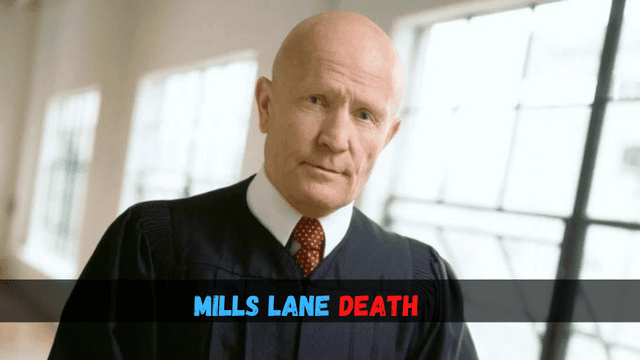 Mills Lane Death: Mills Lane, a boxing referee who was in the ring with Mike Tyson and Evander Holyfield when Tyson bit Holyfield’s ear, passed away on Tuesday. He was 85. Tommy Lane verified to the Reno Gazette-Journal that his father, who had a stroke in 2002 that left him paralyzed, has been receiving hospice care for the previous week.

In addition to his day job as a prosecutor in Nevada, district attorney and judge Lane also moonlighted as a boxing referee and served in the United States Marine Corps.

In the ’80s and ’90s, Lane was the referee for some of the most famous heavyweight bouts, including the one in which Mike Tyson famously bit off Evander Holyfield’s ear and was disqualified. Lane’s signature pre-fight rallying cry of “Let’s get it on!” became an instant classic. Let Explore Mills Lane Death In this Article.

How Did Mills Lane Die?

Lane’s son Tommy stated his father’s condition has worsened dramatically since he entered hospice care on Friday. Lane had suffered a stroke in 2002. His wife Kaye and two sons were present at the time of his death in their Reno, Nevada home.

Millis Health was a Little in his final days. These health issues were due to his old age. On 6 December 2022, he died due to a natural cause as his family does not reveal the real cause. He was 85 years old when he died.

It’s a relief that he’s free from that illness, but we’ll miss him, said Lane. Lane earned an NCAA title in boxing in 1960 and went 10-1 as a professional before becoming a far more well-known referee in the sport. His exhortation of “Let’s get it on!” became the last words before several legendary bouts, and he was respected for being rough yet fair.

Mills officiated both of Holyfield’s victories over Buster Douglas for the heavyweight championship and Tyson’s disqualification from their rematch due to an intentional bite on the ear.

As a referee, Lane’s career began in 1971, when Betulio González and Erbito Salavarria fought to a fifteen-round draw for the WBC flyweight title in front of Lane.

On June 28, 1997, world heavyweight champion Evander Holyfield defended his title against challenger Mike Tyson, with referee Lane presiding. The fight was going to have referee Mitch Halpern but Tyson’s team objected. Because of this, Lane was a last-minute replacement.

We’re sorry to learn of the death of Mills Lane. One of boxing’s greatest ever referees. Our thoughts are with his loved ones. Rest easy, Mr Lane. pic.twitter.com/P8muhXYl5i

A little over three weeks later, Lane was the referee for the Lennox Lewis and Henry Akinwande fight. Akinwande was disqualified after engaging in excessive clinching and despite Lane’s numerous warnings to desist, echoing the outcome of Tyson vs. Holyfield.

Eventually, Tyson was disqualified by referee Terry Lane when he bit Holyfield twice in the ears. A memorabilia collector bought Lane’s blood-splattered shirt the same night he wore it, which was the night of the tragedy.

Read More: Cookie Tookie Death: What Was the Cause of Her Death?

Judge Mills Lane was presided over by Judge Lane. From 1998 to 2001, three full seasons of the courtroom drama aired. The creators of MTV’s Celebrity Deathmatch also approached him about having his likeness and voice utilized in their show as the referee of their plasticine figure matches.

As a result of this opportunity, Lane is now an MTV star. It was Lane’s signature remark, “Let’s get it on!” to open boxing fights as a referee. His character used this identical catchphrase to start battles in Celebrity Deathmatch.

On the episode of WWE Raw aired on November 16, 1998, Lane made a cameo. He made an appearance on the Titantron and ruled on a contract dispute between Stone Cold Steve Austin and the McMahons.