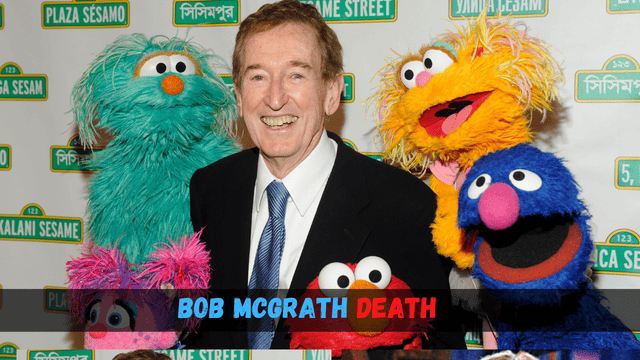 Bob McGrath died on Sunday at his home in New Jersey. He was an actor and recording artist who became a generational icon as one of the original human stars of “Sesame Street.” He was 90.

Family members posted on McGrath’s Facebook page that he had died: “The McGrath family has some sad news to share. Today, our father, Bob McGrath, died. He died peacefully at home, with his family around him.”

However, his health was not so good in recent times and his death was also sudden for everyone. In This article, we will give you complete information about Bob McGrath Death. Please read this article for all information. In addition, if this article was useful, please offer feedback. Your feedback is precious to us.

Bob McGrath Cause of Death

“Today, our father, Bob McGrath, died. He died peacefully at home, with his family around him “Sunday said the post. However, Bob was a little low for the last few days. These illnesses are due to his age because he was in his early 90s and it is natural to have some illnesses at that age. Therefore Cause of death was natural as his family members stated that Bob has died peacefully and we all were around him at the time of his death.

“As a founding cast member, Bob embodied the melodies of Sesame Street like no one else, and his performances brought joy and wonder to generations of children around the world,” part of the statement said. “We will always be grateful for all the years he spent bringing his passion and creativity to Sesame Street, and we are grateful that he shared so much of his life with us.”

How did Bob McGrath Become Successful?

McGrath worked with Mitch Miller, and from 1960 to 1964, he was the featured tenor on Miller’s NBC-TV sing-along show Sing Along with Mitch. He was one of the singers on Songs of the Pogo by Walt Kelly.

In the mid-1960s, McGrath became a well-known recording artist in Japan. He did Irish and other folk songs and ballads in Japanese and put them on a number of successful albums. When he went on the game shows, To Tell the Truth in 1966 and I’ve Got a Secret in 1967, this part of his job was his “secret.”

From 1969 to 2016, McGrath played Bob Johnson on Sesame Street. McGrath was one of the two human characters who had been on the show since the beginning. The other was Susan Robinson, who was played by Loretta Long. When promoting Sesame Street on that network, a Noggin segment talked about how Bob has been around for 40 years.

Bob McGrath, who was one of the original cast members of “Sesame Street,” died Sunday, his family announced. He was 90. https://t.co/cOmGivnJxu

Take A Look at Bob McGrath Early Life and Net Worth!

At the time of his death, Bob McGrath, an American singer, musician, actor, author, and voice actor, was worth $2 million. He was born in June 1932 in the town of Ottawa, Illinois.

He was named after Robert Emmet, an Irish rebel. Bob used to sing for his family while his mother played the piano when he was a child. His mother put him in the Amateur Program at the Roxy Theater, where he came in second place. He went to high school at Marquette.

McGrath and Susan, played by Loretta Long, were two of the longest-running human characters on Sesame Street. It was said that he wouldn’t be back in 2016, but he would still make public appearances.