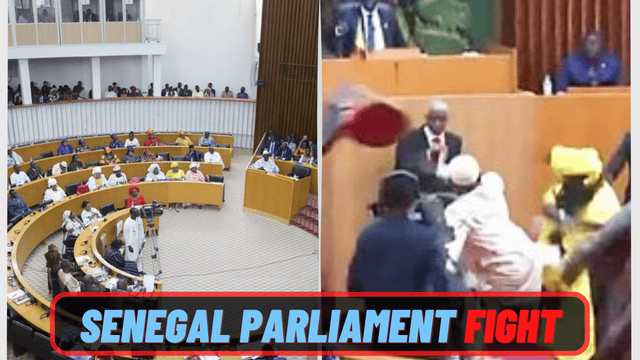 Senegal parliament fight: Television footage showed a violent brawl breaking out in Senegal’s parliament after a male opposition legislator slapped a female colleague in the face.

Massata Samb, an opposition lawmaker, walked up to Amy Ndiaye Gniby, a member of the ruling coalition Benno Bokk Yakaar (BBY), and slapped her during a budget presentation on Thursday, sparking a series of fights.

After another lawmaker tackled Samb to the floor, Gniby flung a chair back in her direction. Political blows, accusations, and insults were being thrown, so the session had to be put on hold.

After the ruling party lost a comfortable majority in the legislature in July, partly due to fears that President Macky Sall will run for a third term in 2024, tensions have risen between the government and the opposition.

The opposition claims that Sall is planning to seek a third term despite term limitations and an earlier vow, although Sall has been evasive about the matter. Sall’s backers say he can run for office again since the age limit was removed by a recent constitutional amendment, even though he’ll be 60 by then.

When parliament met again in September, it was the first time since the election, and lawmakers immediately began fighting over who would be the next speaker.

Samb was speaking to the assembly on Thursday about the weekend remarks made by Gniby, in which she criticized a spiritual leader who is against a third term for Sall. He remarked to the president, “Mister President, a deputy has stood in front of this tribune to insult someone’s marabout.”

Samb walked over and hit Gniby after she laughed off his comments and said she didn’t care.

Video of the brawl has gone viral, prompting discussions about gender-based violence.