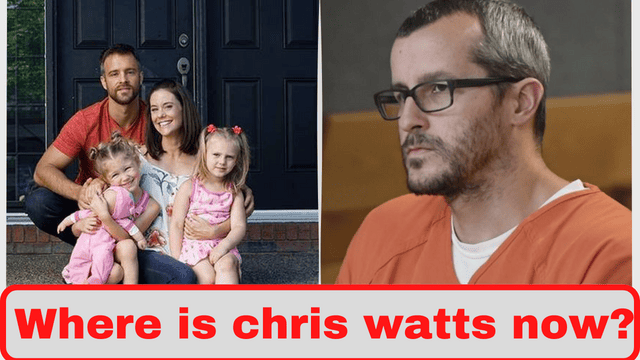 Where Is Chris Watts Now: Chris Watts is an American who is famous for killing his whole family. He is serving a life sentence in prison right now. Keep reading to find out where Chris Watts is now if he is still alive, and where he killed his family.

Who is Chris Watts?

After a chance encounter in 2010, Shan’ann Rzuck and Chris Watts became a couple. They finally tied the knot on November 3, 2012. Their happiness was amplified by the arrival of their twin daughters, Bella and Celeste.

The family moved from North Carolina to Colorado so that Chris could take a job at Anadarko Petroleum, and Shan’ann could be an independent marketing representative working from home. When Shan’ann found out she would be having her third child in the spring of 2018, she was ecstatic. There would soon be a new addition to the family, a son they named Niko.

Where Is Chris Watts Now?

Chris Watts has remained a villainous figure ever since the news of his triple murder made headlines and led to the Netflix documentary American Murder: The Family Next Door. Find out what happened to the murderer after he admitted to killing his pregnant wife, Shanann Watts, and their two young children, Bella, 4, and Celeste, 3.

Family killer Chris Watts described murdering his family in grim letters from behind bars and said he took two attempts to kill his own daughtershttps://t.co/Z58ZywLVtj

Watts was moved from a prison in Colorado to the Dodge Correctional Institution in Waupun, Wisconsin due to safety concerns. Watts allegedly reconnected with his mistress Nichol Kessinger three years after she changed her identity and disappeared, as reported by the Daily Mail in March 2021.

Chris Watts: Does He Still Exist?

Chris Watts is presently detained at the high-security Dodge Correctional Institution in Waupun, Wisconsin. He was brought there from his previous location in Colorado due to the intense interest in his case, which allegedly put him in danger. He revealed to the police that he keeps pictures of Shanann, Bella, and Celeste in his cell and speaks to them every night.

The Crime of Chris Watts

A murder took place in a small town in the state of Colorado. It was 2018, and the news that Chris Watts had killed his family set the media on fire. At first, the killers denied killing anyone, but it only took the police 48 hours to figure out what happened.

Chris Watts woke up on that terrible day only thinking about killing his family. The random person must have found it strange to hear. But when we looked into it, we learned that Chris did it to keep his mistress, Nichol Kessinger.

He found a way to strangle his wife, but that wasn’t all. He also took his kids to an oilfield where he used to work and strangled them the same way he strangled his wife. Then, after getting rid of the bodies, he put on a sad show as if he didn’t know what had happened.

Related: Where is Nichol Kessinger Now and Was She Involved in the Murder?

Finally, because people around him were getting more and more suspicious, the police did a thorough investigation. Watts kept saying he had nothing to do with his family going missing, though. He cried when the media asked him about it, just to make it look like he wasn’t guilty.

Where Did Chris Watts Kill His Family?

The murders of the Watts family happened in the early hours of August 13, 2018, in Frederick, Colorado, in the United States. Shanann Cathryn Watts, his pregnant wife, was killed by strangulation, according to Christopher Lee Watts (born May 16, 1985).

He eventually admitted to killing their daughters Bella, 4, and Celeste, 3, by suffocating them with a blanket. On November 6, 2018, Watts entered a plea agreement in which she admitted guilt to a number of first-degree murder charges, eliminating the possibility of the death penalty from the sentence. Three of the five consecutive life sentences he received must be served before being eligible for parole.

Why Did Chris Watts Do It?

In order to pursue his developing relationship with coworker Nichol Kessinger and avoid having another child with her, Chris Watts murdered his pregnant wife Shanann Watts. I thought if Shanann wasn’t pregnant it would be easier to be with Nichol,” Chris wrote. He wrote of the killing, “I knew if I took my hands off of her, she would still keep me from Nikki.” According to his confession letters, Chris Watts admitted to drugging Shanann with Oxycodone to end her pregnancy.