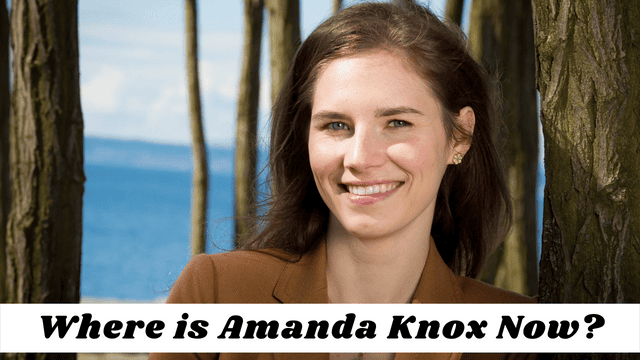 Where is Amanda Knox now?: Netflix has gotten more and more in control of true-crime documentaries as different shows have gone viral. Another documentary series, “Amanda Knox,” asks the age-old question, “Did she or didn’t she?”

The documentary shows another shocking murder trial, which makes people’s sympathies and suspicions change all the time.

Who is Amanda Knox?

Among her many accomplishments, Amanda Marie Knox is a writer, activist, and journalist. After being falsely accused of murdering her roommate and fellow exchange student Meredith Kercher in 2007, she spent nearly four years behind bars in Italy. The Italian Supreme Court of Cassation issued a final ruling of acquittal for Knox in 2015. Knox, who was 20 years old at the time of the murder, dialed 911 after returning to her and Kercher’s apartment from a night out with her boyfriend, Raffaele Sollecito, and discovering Kercher’s bedroom door locked and blood in the bathroom.

She is said to have implicated herself and her employer, Patrick Lumumba, in the murder during subsequent police interrogations, the conduct of which is in dispute. Knox, Sollecito, and Lumumba were initially arrested for Kercher’s murder, but Lumumba was later released. At the first trial, both Knox and Sollecito were found guilty and given lengthy prison terms (26 and 25 years, respectively).

Where is Amanda Knox now?

Knox returned to Seattle, where she had previously lived and grown up, after almost four years in an Italian prison. The 34-year-old has been actively involved with the Innocence Project, a non-profit organization dedicated to ending erroneous convictions, ever since he was exonerated of all murder-related charges.

For the first time since her release, Knox gave the opening address at a conference on criminal justice organized by the Innocence Project in Italy in June 2019.

Knox, in addition to her work with the Innocence Project, is a journalist and the author of the 2013 memoir Waiting to Be Heard. The Scarlet Letter Reports, a Vice Media production, will be hosted by Knox on Facebook Watch, according to a December 2017 announcement.

Knox and author Christopher Robinson got married in November 2018. In Washington state, the couple got married in a space-themed ceremony. Knox wore a whimsical yellow princess gown with white sleeves to her interstellar wedding with her hair tied back.

Her guests dressed in fancy dress as princesses, warriors, and captains in keeping with the wedding’s theme. Robinson first met Knox when she read and reviewed her future husband’s book for a neighborhood publication.

The Yale Younger Poets Prize, the Colorado Prize for Poetry, and the Ruth Lilly Fellowship have all had Robinson on their finalist lists. After three years of dating, the couple shared a social media video to reveal their engagement.