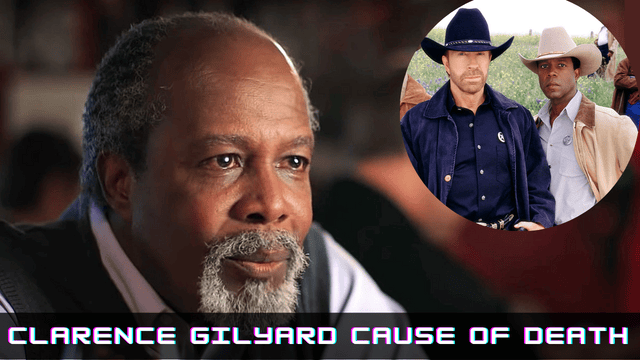 Clarence Gilyard Jr., who played James Trivette on the TV show Walker, Texas Ranger, has died. He was loved for that role.

The actor was only 66 years old. He was known for his roles in movies like Top Gun, Die Hard, and From Above. The College of Fine Arts at the University of Nevada, Las Vegas, where he taught film and theatre, told the public about his death on November 28, 2022.

Fans are using social media to show Clarence’s family and friends how much they care, and many of them have questions about what happened. So, what happened to Clarence Gilyard Jr.? Here’s everything we know about it.

Who was Clarence Darnell Gilyard Jr?

American professor, actor, and writer Clarence Darnell Gilyard Jr. Some sources list his middle name as Alfred, and he had acting roles in both film and television as well as on stage.

Clarence had been battling a “long illness,” according to the Las Vegas Review-Journal, even though a cause of death has not been disclosed. Clarence’s passing was announced in a press release by the College of Fine Arts at the University of Nevada, Las Vegas.

RIP Clarence Gilyard Jr. One of the greats. pic.twitter.com/8W9mp3VAXL

Nancy J. Uscher, dean of the UNLV College of Fine Arts, issued a statement saying, “I share this news with profound sadness.” “All of those who knew him and his students both found great inspiration in him. He was very well known in the university for his many extraordinary talents, dedication to teaching, and career achievements.

His spirit of generosity was limitless, and he was always willing to help in any way to support endeavors and performances, continued Uscher. We are happy to remember Clarence and are grateful for all he did for the College of Fine Arts, the UNLV neighborhood, and the world through his remarkable individual accomplishments.

The Die Hard alum’s family is from New Orleans, Louisiana, but he spent his childhood on Air Force bases in Hawaii, Texas, and Florida. He was raised as a Lutheran but converted to Catholicism in the 1990s.

Clarence spent his childhood in the San Bernardino suburb of Rialto, California. He attended Eisenhower High School back in the day. He was a brilliant student who graduated in 1974.

Soon after, he enrolled at Sterling College. He used to play football in college and was a member of the Sigma Chi fraternity. He also received a tennis scholarship at the time, but he dropped out before finishing his studies. His bachelor’s degree was earned at California State University, Dominguez Hills.

Clarence moved to Los Angeles in 1979 to pursue an acting career, and he never returned. Throughout his over 30-year acting career, he played numerous roles. He appeared on Diff’rent Strokes, The Facts of Life, 227, Simon & Simon, and Riptide, among others.

Gilyard made his film debut with Top Gun in 1986. He played Lt. (JG) Marcus “Sundown” Williams, an F-14 Tomcat radar intercept officer, in the film. Then, in 1988, he appeared in the action film Die Hard. In the film, he portrayed Theo, a criminal computer specialist.

The Hollywood actor has also appeared in a number of television series, including The Facts of Life, Walker, Texas Ranger, Sons of Thunder, and many others. He possessed a “legendary screen presence.”

During this difficult time, we extend our deepest condolences to the friends and family of Clarence Gilyard Jr. May the soul of the deceased rest in peace Don’t forget to stay tuned for the latest updates from the entertainment industry.