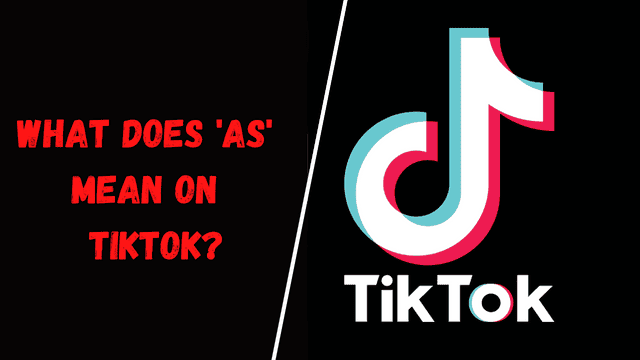 What Does ‘AS’ Mean on Tiktok? Check It Here!

What does the term “AS” stand for and why are people using it in their videos on the social media platform? Learn more here. If you enjoy watching TikTok videos, you’ve probably noticed lately how many inventive videos on the platform use the term “AS.”

Although trends on TikTok sometimes seem to catch on in a matter of hours, this one has left some users really exercising their creative muscles. What exactly does “AS” stand for, even though it is used as a hashtag and appears in the videos themselves?

What is the Meaning of ‘AS’ on Tiktok?

Adult Swim is the name of the TikTok fad known as “AS,” which has been sweeping social media. User-created bumpers or bumps are used, which are then followed with [adult swim] or [AS].

The material bears homage to the initial Adult Swim bumpers or bumps, which were played prior to and following commercial breaks. The bumps frequently depicted an old automobile or people swimming in a lake and were fairly simple or abstract.

As usual, TikTok members are showcasing their creativity by using [AS] in as many different ways as they can, such as by writing it out using cashew nuts.

What is Adult Swim on TikTok?

Here’s what you need to know about Adult Swim if you don’t already know it. Cartoon Network’s adult-oriented late-night programming block, Adult Swim, contains TV shows that are unmistakably not geared at its younger target audience.

Rick and Morty, Robot Chicken, and The Eric Andre Show are a few of the programmes that typically air on Adult Swim. Reruns of classic cartoon programmes including American Dad!, Family Guy, and Bob’s Burgers are also broadcast on Adult Swim.

The odd, peculiar, and occasionally wholesome bumpers or “bumps” that the channel airs before and after their ad breaks to promote their own programmes served as the inspiration for the recent TikTok craze.

Which Song is Included in the Adult Swim Craze?

A TikTok producer by the name of Vano 3000 is responsible for making popular the song that contributed to the trend’s virality. The song Time Moves Slow feat. Sam Herring by BADBADNOTGOOD is sampled on the beat.

Does Adult Swim Know ‘AS’ Trend?

Yes! Adult Swim has a profile on the social media site TikTok, so they can see everything that other users post. They put up a video called “We see you” with the Vano 3000 beat and the hashtags #adultswim and #adultswimbump.

What Does ‘IB’ Mean on Tiktok?