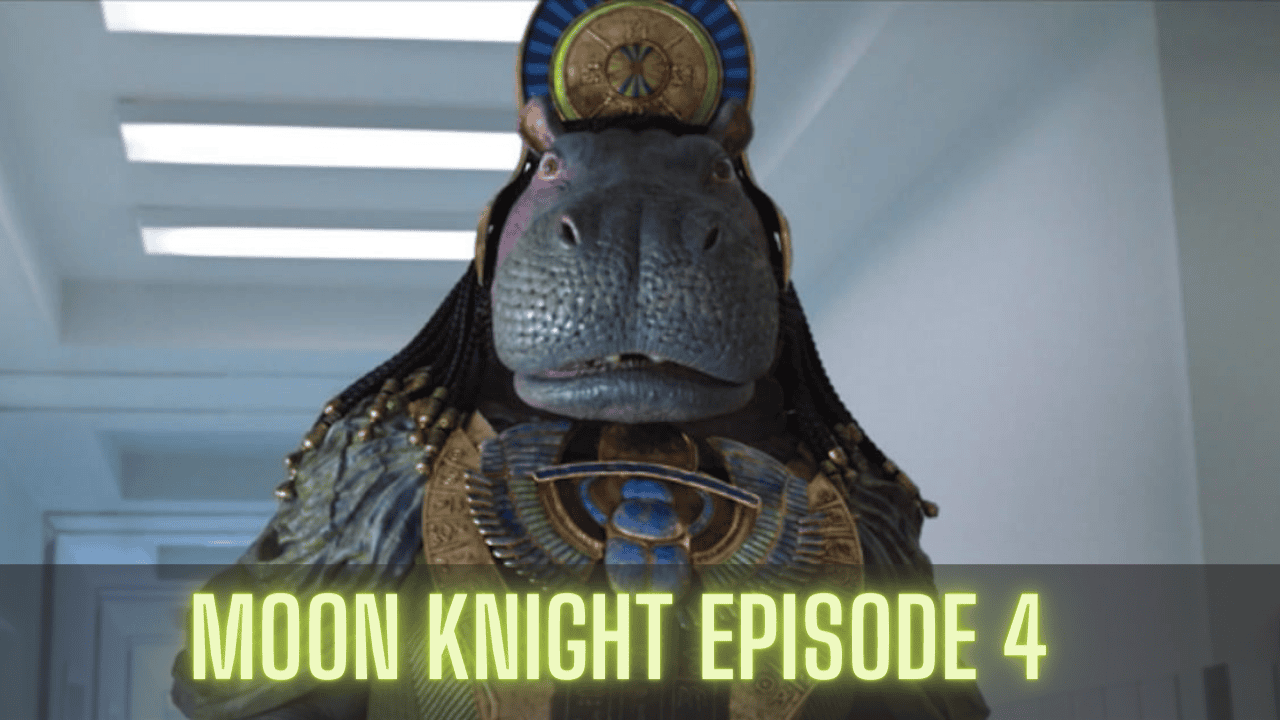 Moon Knight Episode 4 Ending Explained: Moon Knight felt like Indiana Jones or The Mummy with a touch of Alien, as episode 4 of the Marvel Cinematic Universe series debuted on Disney Plus and sent its characters scurrying around an Egyptian tomb.

With the moon deity Khonshu (F. Murray Abraham) imprisoned by his other gods, his human avatar Marc Spector (Oscar Isaac) is forced to combat cult leader Arthur Harrow (Ethan Hawke) without the use of his Moon Knight skills.

Even though Marc is still a savage, he isn’t doing everything by himself. Steven Grant (Oscar Isaac with a London accent) and Layla El-Faouly (May Calamawy), his estranged wife, are working with him to stop Harrow from unleashing the captive death goddess Ammit on the world.

What is Moon Knight About?

We felt Moon Knight had found its groove as a global adventure series a la Indiana Jones or The Mummy. Yes, there were more mysteries to be answered in the episode, such as Marc’s link with Layla’s father and Marc and Steven’s third personality. We anticipated a change of scenery after the first two episodes, but not a mental institution.

In “The Tomb,” Arthur Harrow shoots Marc and then watches him fall into a golden pool of water for 35 minutes. Marc awakens in an immaculate white mental hospital. All the side characters we’ve met as orderlies or patients, including Layla, are in one shot. To make matters worse, Arthur Harrow, who seems to manage the facility, has diagnosed Marc with a mental breakdown.

The abrupt tone changes baffle the show’s viewers. The Lemire and Smallwood run-inspired directors Aaron Moorhead and Justin Benson told Den of Geek. As you scroll over the pages, you start to see them mirrored.

Who Is the Hippo?

When Marc and Steven are about to flee out of the movie, they come across an old Egyptian-style anthropomorphic hippo.

She greets Marc and Steven with a smile and yells with delight. As the ancient Egyptian goddess of childbirth and fertility, Taweret (Antonia Salib) also serves as a guardian goddess for both mothers and children. She’s an original character in the Marvel Cinematic Universe, which makes her an uncommon find.

Dive into all the twists and turns from Episode 4 of Marvel Studios’ #MoonKnight. https://t.co/Nfq5e0Kq0Y

It’s tougher to hypothesize about her role because she doesn’t have an apparent comic counterpart, but she could have arrived to assist Marc to reunite his broken mind and free Khonshu. After Marc frees the moon god from the figurine, he will have access to the suit’s healing powers and be able to repair the bullet wounds.

Read More:- The Boys Season 3 Release Date: Will Season 3 Be Able to Solve the Mystery?

Taweret and the Hippo Lady

Taweret, the Egyptian goddess of birthing, is indeed the hippo that greets and terrorizes Marc and Steven at the end of the episode. Even though she was briefly addressed in “The Goldfish Problem,” there isn’t a lot of information regarding her role in this story because she isn’t in the Lemire and Smallwood comics or anywhere else in the Marvel Universe. 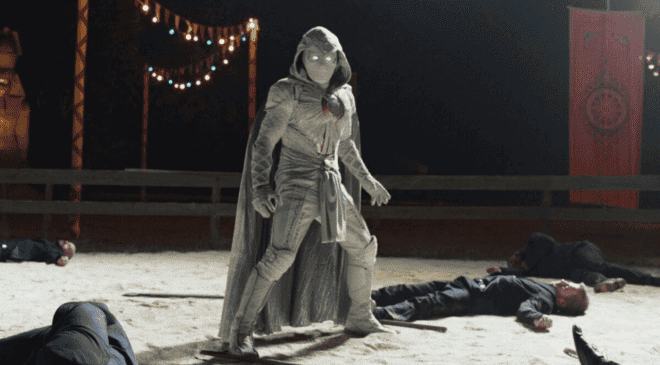 However, the British actress who voices Taweret Antonia Salib has been confirmed. Tawaret, like Khonshu, is largely a guardian in Egyptian mythology. Protecting mothers-to-be and their infants is one of her main motivations for taking on the appearance of a hippo.

Considering Marc and his shattered mind, it’s possible that the themes of birth and rebirth will be more indirect here, but hopefully, the answers will be forthcoming in Moon Knight’s final two episodes.

Also, Read:- Jumanji 3 Release Date: Who Will Return in the Cast of Jumanji 3?

The Role of Crawley

Crawley has been Marc’s gold statue guy for most episodes. No one appears to notice him running a bingo game at the hospital.

In the comics, Crawley is a vital ally for Moon Knight. Crawley is a homeless guy who often interacts with Jake Lockley. When Crawley visits Gina’s Diner, he helps Lockley and occasionally requires Moon Knight’s assistance.

Crawley is Marc’s mental hospital mentor in the Lemire and Smallwood series. Crawley, like Marc, is an outcast with a distinct view on the world. As a consequence, he can help Marc break free of Khonshu’s control and embrace his own skills.

What Was the Purpose of Steven Grant, Created by Marc?

More than Marc’s illness, it appears that Steven Grant is part of a plan to get away from Khonshu. Directors Benson and Moorhead used a dusty VHS of a 1990s adventure film about Steven Grant to segue from Egypt to the psychiatric hospital. The hero speaks with a British accent and takes a leap of faith into uncharted territory. 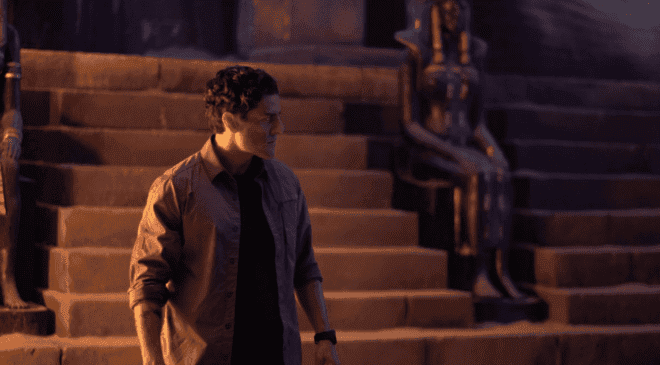 It’s reasonable to assume that Marc was inspired to pursue a career in adventure after seeing Steven Grant as a kid (and later a mercenary). To protect a piece of his own identity, he may have conjured Steven Grant on his own, outside of Khonshu’s guidance.

Who Is the Third Character Jake Lockley?

That’s something we don’t yet know. The sarcophagus, though, is likely where we first glimpsed that person’s face. Marc has two comic-book alter egos, as addressed in the most recent Marvel Standom episode: Steven Grant and Jake Lockley, a New York taxi driver on the prowl for mischief. Jake is a little rougher than the other two characters.

Is This an Illusion?

Yes. Moon Knight’s mental condition is one of Lemire and Smallwood’s most significant contributions to the Moon Knight canon. As a result, most creative teams would describe Marc’s mental state as shattered, as if there was a cohesive whole that Marc needed to accomplish.

Lemire and Smallwood’s run, on the other hand, reveals to Marc that his unique perspective on the world is actually a gift. Marc recognized he could deal with problems in a way that others could not as he worked with his mental state.

So, what we may be seeing is Harrow attempting to fight back by changing his perspective on the world. He’s taking on Harrow on Harrow’s terms by doing so. In the same way that most cult leaders control their followers, Harrow dictates reality to his adherents. Harrow will be confused if Marc decides to toss it all out the window.

At the End of Moon Knight, Who Was the God?

For example, a sci-fi space pilot version of Marc Spector was presented as a new identity in the 2016 “Moon Knight” comic book series. A hippopotamus goddess appeared at the end, wasn’t that, right? Taweret, of course. Taweret was a god of protection who was also linked to childbirth in Egyptian mythology.

Nickmercs Net Worth 2022: Why the Streamer Criticized His Fans?