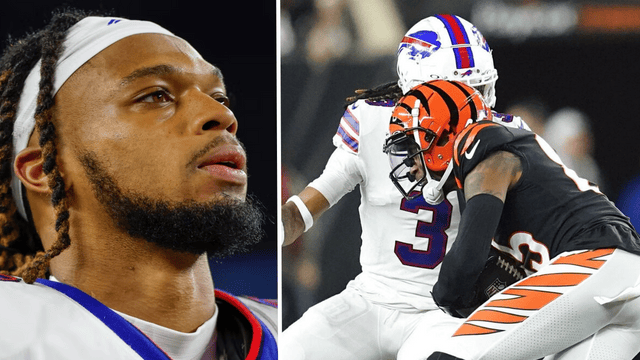 Damar Hamlin Injury Update: Damar Hamlin, an NFL player, reportedly went into cardiac arrest during Monday night’s game and had to be revived twice. After making a tackle on Cincinnati Bengals receiver Tee Higgins, the Buffalo Bills player collapsed to the ground and needed medical attention; he is now in severe condition in the hospital.

They had to resuscitate him twice because his heart had stopped beating. His uncle, Dorrian Glenn, told CNN that the first responder performed CPR on the field before transporting Hamlin to the hospital, and then again after they arrived.

Darar Hamlin was admitted to the University of Cincinnati Medical Center’s intensive care unit last night, and he remains in serious condition today. The Bills tweeted on Tuesday, “We are grateful and thankful for the outpouring of support we have received thus far.

Hamlin’s loved ones have expressed gratitude to fans, medical staff, the Bengals, and coach Zac Taylor. A statement released on Tuesday stated, “We are very affected by the prayers, sweet comments, and donations from fans around the country.”

Dan Orlovsky, an NFL commentator, paused during a live broadcast to pray aloud for Damar Hamlin. Orlovsky, a former NFL quarterback, said he wanted to openly pray for the injured Buffalo Bills player on ESPN’s NFL Live broadcast since he had heard so much about others praying for him.

An NFL reporter updates the situation with Hamlin

CBS Sports’ Josina Anderson tweeted this evening that they had received word that Damar Hamlin’s “breathing is better” and that they would “continue to pray.”

Received word this evening that Damar Hamlin’s “breathing is improving.”

We continue to pray.

A tweet published by the Fox Sports host shortly after Buffalo Bills defender Damar Hamlin collapsed on the field with a heart arrest on Monday night has drawn widespread criticism.

Bayless tweeted during the event, “No doubt the NFL is considering postponing the rest of this game – but how? A game of this significance played so late in the season, is essential to the regular-season outcome… but now seems so meaningless.

Later, Bayless said that his tweet had been misread.

Shoutout to Dan Orlovsky for not just saying thoughts & prayers but actually stopping NFL Live to bow his head, close his eyes, and pray for Damar Hamlin.

The health of that young man is of paramount importance. Yes, that was the point of my last tweet. Sorry if it was misread, but his health is the most important thing to me right now,” Bayless tweeted.

The incident caused his co-host Shannon Sharpe to skip Tuesday’s broadcast. Bayless did not address his tweet on Tuesday’s episode of Undisputed, but he did appear distraught and say that he had “barely slept on it.”

We’re going to try to do the program pretty much as usual, so I apologize in advance if what we do offends anyone. I’ll be honest and say that I’m still reeling over what happened to Damar Hamlin last night. I’m still in shambles, to be honest. To be honest, I’m not sure whether I have it in me to put on this performance today.

Pray for Damar” has been added to everyone’s profile pic beside his jersey number 3.

We must condemn the low reaction to Damar Hamlin’s injuries