Mark Richard Hamill is an actor, voice artist, and writer from the United States. He is most recognized for his portrayal of Luke Skywalker in the Star Wars film trilogy, for which he won three Saturn Awards.

Corvette Summer (1978) and The Big Red One (1980) are two of his previous cinematic performances (1980). Hamill has also performed in a number of theatre performances, most notably in the 1980s.

The Early Life of Mark Hamill

Mark Richard Hamill was born in Oakland, California, on September 25, 1951, to U.S. Navy Captain William Thomas Hamill and Virginia Suzanne Johnson. He is one of seven kids. His brothers and sisters are named Will, Patrick, Terry, Jan, Jeanie, and Kim.

His father comes from England, Scotland, Ireland, and Wales, and his mother was half English and half Swedish. Hamill has said that his father was a “Nixon Republican” and a strong Roman Catholic.

Because his father changed jobs and moved the family with him, the Hamill children changed schools a lot. He went to Walsingham Academy in Williamsburg, Virginia, and Edgar Allan Poe Middle School in Annandale, Virginia, when he was in elementary school.

He moved to the 5900 block of Castleton Drive in San Diego, California, when he was 11 years old. There, he went to Hale Junior High School. His family moved back to Virginia during his first year at James Madison High School in San Diego, so Hamill went to Annandale High School.

By the time Hamill was a junior in high school, his father was stationed in Japan. There, he went to Nile C. Kinnick High School and was a member of the Drama Club. He graduated in 1969. After that, he went to Los Angeles City College to study drama.

The Professional Life of Mark Hamill

Mark Hamill’s big break came in 1977 when he was cast as Luke Skywalker in the film “Star Wars.” The film was a great hit and is now regarded as one of the most famous film franchises in the world. ‘Watchers Reborn,’ ‘Wing Commander,’ ‘Sinbad: Beyond the Veil of Mists,’ ‘Batman Beyond: The Return of the Joker,’ ‘Comic Book: The Movie,’ ‘Ultimate Avengers II,’ ‘Quantum Quest: A Cassini Space Odyssey,’ and ‘Scooby-Doo: Camp Scare,’ are just a few of the films he has starred in over

In 2017, he returned to the character of Luke Skywalker in ‘Star Wars: The Last Jedi,’ which went on to become one of the highest-grossing films of the year.

What is the Net Worth of Mark Hamill?

Mark Hamill has a net worth of $18 million as an actor, producer, writer, and director in the United States.

Mark Hamill is most recognized for his portrayal of Luke Skywalker in Star Wars films, but he has also made a name for himself as an actor, largely via stage performances and voice acting.

Nathan appeared in Star Wars: Episode I – The Phantom Menace as a member of the Royal Guards of Naboo. 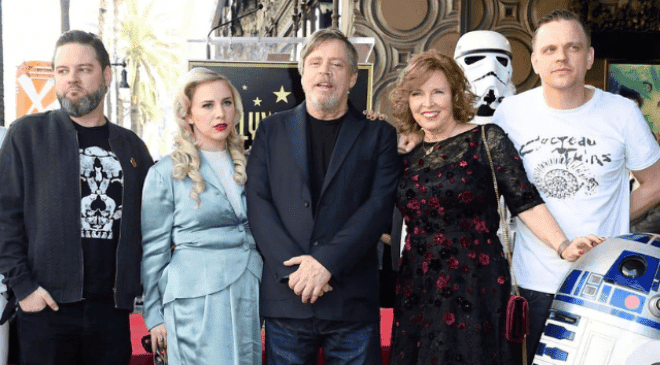 Hamill was engaged in an automobile accident in 1977, which shattered his nose and left cheekbone. Finally, in 2017, Hamill became a supporter of the English football team Wolverhampton Wanderers F.C. In the same year, he joined the Royal Society of Chemistry as an affiliate member.

Mark Hamill’s Salary and Net Worth

Mark would get paid tens of millions of dollars to come back to the franchise years later. He was paid $3 million for his short cameos at the end of “Star Wars: The Force Awakens,” which came out in 2015. That is one of the most money an actor has ever made for being on camera.

Mark Hamill is an American actor who has had a long and successful career. He is perhaps most recognized for the parts he played in the ‘Star Wars film series. A lot of people are raving about how good the movie is, and it’s getting a lot of attention.

He is a two-time recipient of the Saturn Award, and the Hollywood Walk of Fame has honoured him with a star. In the year 2022, it is anticipated that Mark Hamill’s net worth is $18 million.

What exactly happened to Mark Hamill?

Hamill had facial fractures, which necessitated reconstructive surgery using cartilage taken from his ear. He also broke his nose.

After it was finished, he had an appearance that was clearly altered. He had the impression that his career was ended practically as soon as it had started. It was not the first time that an accident came close to ending the career of a young actor who was just starting out.

Who among the cast of Star Wars had the most money in their bank accounts?

Gepta made his way to the domicile of Bohhuah Mutdah, the most prosperous creature in the cosmos, which was located on the asteroid Oseon 5792.