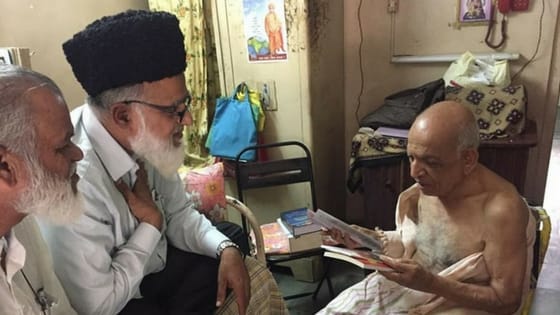 Mumbai: The President of Jamaat-e-Islami Hind Maharashtra, Engineer Taufeeq Aslam Khan, PR secretary Abdul Hafeez Farooqui and secretary for social services Mazhar Farooq paid a courtesy visit on Saturday to the elderly couple who wrote to the President to seek permission to end their life and convinced them to abandon their suicide plans.

Mr. Narayan Lawate (88) and his wife Mrs. Iravati Lawate (78), a resident of Charni Road, Mumbai have made a heart-wrenching plea to President Ram Nath Kovind seeking permission for active euthanasia or “assisted suicide” as they feel they are of no use to society or themselves.

The couple said that they were tired of living and did not see any purpose to their lives, given their old age. Surviving on Govt pension, they said that they have no children and say their siblings are also no more, are of the view that keeping them alive against their wishes is a “waste of the country’s scarce resources as well as theirs”.

The JIH team explained to them that life and death are predestined and there is an eternal life after our death. Khan reassured them that you are not alone, we are with you and we will take care of you.

When asked why they are showing so much concern, Khan said that all men are children of Adam and Eve and hence we are family. Prophet Muhammad has also taught us to be kind and helpful to the needy. Such an act would please God and make us eligible of His mercy.

The couple was so overwhelmed with these Islamic teachings and the gesture of the JIH team that they dropped their idea of committing suicide and promised them that they would live the life that God has ordained for them. They said that many people had come to visit them but nobody had told them about these reassuring things.

The couple were gifted a Marathi translation of the Qur’an and some other books on the hereafter and other spiritual topics. The team took their leave for the day, leaving them with a new hope and renewed determination.