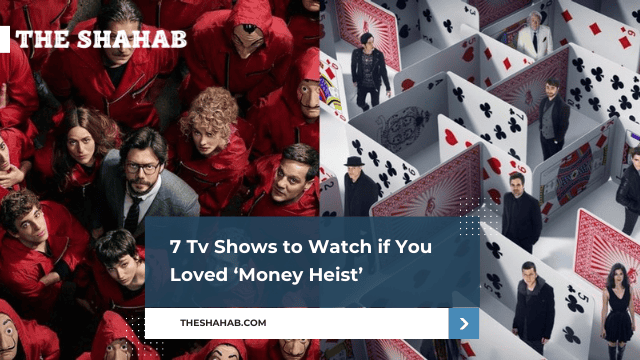 We live in a world filled with online entertainment. We have seen an uptake in media consumption from gambling at an online casino to playing video games and taking pictures for social media. In addition, streaming media platforms like Amazon Prime, Apple TV + and Netflix have given fans the freedom to choose from a wide genre of series available and find ones they enjoy.

Money Heist’s suspenseful characteristics and subversions of these clichés helped deliver a constant run of episodes to its viewers. When a heist tale is brought to life, it generates a lot of energy. Consequently, audiences are yearning for more blockbuster content. Fortunately, some excellent series are available that will satisfy Money Heist lovers.

In the universe of “Better Call Saul,” our titular lawyer is much more Jimmy McGill, which is his birth name, than Saul Goodman. He’s a struggling lawyer who is slowly becoming his older self, i.e., the Saul Goodman we all know from “Breaking Bad“.

Season five depicts that decline is nearing its end. Jimmy changes his legal identity to Saul Goodman at the start of the season, fully embracing his low-rent criminal lawyer position.

Mindhunter by Netflix follows FBI agent Holden Ford, played by Jonathan Groff, who puts himself in the shoes of killers. He studies their warped motivations in intense detail by visiting them in prison and recording interview sessions. As a result, he becomes almost superhumanly adept at solving incidences by recognizing the significance of seemingly innocuous clues.

Unfortunately, his bosses aren’t always on board with Ford’s radical techniques. Even his loyal but temperamentally opposite companion Bill Tench, played by Holt McCallany, has his concerns from time to time, and Tench’s dark pranks have disrupted Ford’s love excursions.

Sam Esmail wrote and produced Mr. Robot. It stars Rami Malek as Eliot, a daytime cyber security expert for a nefarious corporation and a nighttime vigilante hacker. Eliot had the option to hack for the greater good during the first season. This series follows him on his quest of hacking into other people’s internet data in an effort to compel them to alter their ways.

Elliot is the kind of geeky, awkward hero you wouldn’t expect to appreciate. However, Mr. Robot demonstrates the hidden power of hacking crooks for a good cause.

This fantastic show highlights the incredible intrigue in cyber security that is sometimes concealed in plain sight. Moreover, it is fascinating to watch the type of big things these hackers attempt to get away with.

Elite, a Spanish teen drama thriller television series, is set to broadcast this year. Netflix renewed the sitcom for a sixth season premiere early this year.

The sitcom follows a flash-forward narrative with a mystery aspect, with each series taking place in 2 timelines. Netflix is about to release Elite Season 5 after a lengthy journey. Itzan Escamilla, Omar Ayuso playing Samu, Claudia Salas as Omar, and Diego Martin as Benjamin, among others, are all expected to return for Elite Season 5.

Netflix Elite Season 5’s release date has yet to be announced. However, we will keep you updated when we receive new information from the film’s producers.

They catch card-counting fraudsters, costly streaks of blind luck, and rival online casinos trying to steal their big-money players with his new employee. The employee’s name is Danny McCoy, an ex-Marine.

Unfortunately, Big Ed recently discovered Danny sleeping with his daughter, Delinda, as if the usual job-related pressures weren’t enough. We know you would love to see how things will play out between these two.

Prison Break is a non-stop thriller with a great plot and a great cast. It is led by Michael Schofield, played by Wentworth Miller, who has a calm, calculated disposition and a focused narrative.

The plot revolves around Michael’s relationship with his sibling Lincoln played by Dominic Purcell, who is falsely convicted of murder and sentenced to death.

On September 22nd, 2004, Oceanic Airliner 815 destructed mid-air. It collapsed on a Pacific Island, forcing its survivors to find the strength and courage they never knew they possessed to survive. However, they soon realize that the island is riddled with mysteries, such as a strange smoke monster, housing with electricity and warm/cold clean water, a group called “The Others,” and a mystical man named Jacob.

This year is set to be a year of great releases by various online streaming platforms like Netflix, HBO MAX, and Apple TV +. In addition, some upcoming films such as Lupin, Good Girls, Locked-up, Leverage, and Ozark, among others, will keep you captivated.

Many of your favorite actors will also be returning to the big screen. So, stay tuned for more updates concerning these and many more TV shows.

Who are the Richest Premier League Footballers?