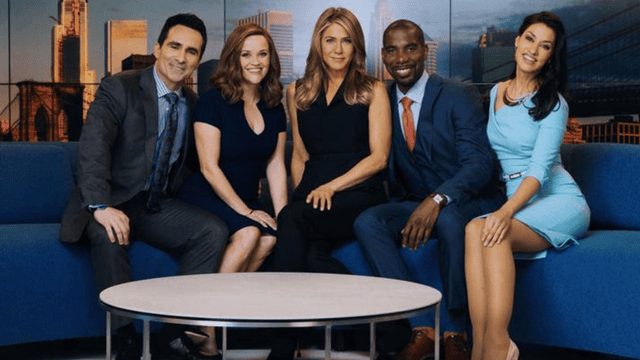 Who is the Morning Show Based on? All About This Series!

Who is the morning show based on: Season 2 of The Morning Show on Apple TV+ premiered on September 17, 2021, and starred Jennifer Aniston, Reese Witherspoon, and Steve Carell. When Alex Levy’s (Aniston) co-anchor of 15 years, Mitch Kessler, was fired by the network in the first season, her world came crashing down (Carell). Many viewers of the drama series that dealt with the #metoo movement have wondered if it was based on real events because of the striking similarities between the two.

Is ‘The Morning Show’ based on a True Story?

The Morning Show is an Apple TV+ drama series, although it is fictitious and not based on any real-life events or people. However, the series’ inspiration came from a nonfiction book: In his book Top of the Morning, Brian Stelter takes readers inside the competitive morning television industry. In the book, Stelter recounts his experiences as a media reporter for the New York Times.

Also, he pays special attention to Ann Curry, who has taken over for Meredith Vieira on The Today Show. In spite of this, Stelter claims that the network pressured her to leave the show after only a year and a half. Mark Ellenberg is credited with pitching the series concept to stars Reese Witherspoon and Jennifer Aniston, per an article in Entertainment Weekly.

The moment he saw the network replace Jane Pauley as presenter of The Today Show in 1989 was a major inspiration for his notion. The Morning Show discusses an idea that many people have about the substitute character, Alex (played by Aniston), based on her age.

The book also chronicles the struggle between Good Morning America and Today, which may serve as inspiration for the rivalry between The Morning Show and Your Day, America.

Matt Lauer and “The Morning Show”

Season 1 of The Morning Show was not based on the pitch that Ellenberg, Aniston, and Witherspoon made to Apple. Matt Lauer was one of NBC’s Today Show’s highest-paid news anchors as Apple TV+’s new series was being developed.

Developing the project began in August, but by November, the world had shifted, as Witherspoon told Entertainment Weekly.

Lauer was let go from NBC on November 29, 2017, allegedly due to his inappropriate behaviour toward women. An employee reportedly complained to management about “inappropriate sexual behaviour in the office,” as reported by Business Insider.

His position as morning programme co-host was eliminated as a result of this complaint. A public apology and denial of some of the charges occurred in the months that followed. Many viewers of the first season of The Morning Show have drawn parallels between Mitch Kessler and Matt Lauer.

Read More: “Will Trent Episode 4” Be Based on a True Story?

Witherspoon told the media site, “I don’t think I’ve seen a moment where more people have lost their entire careers over wrongdoing.” Those who appeared to be invincible. We had to scrap everything and start from scratch, but the resulting show is stronger and more timely than the original.

Season 2 is also about Real-Life Events

At the start of the second season of The Morning Show, the news network is struggling to cover the global spread of the coronavirus (COVID-19). Racism and racial bias in the workplace are also examined. To begin with, Steve Carell’s contract with Apple TV+ was limited to one year. But he came back as Mitch for the show’s second season. In season 1, he was involved in a sexual misbehaviour controversy, and viewers have been following the ramifications ever since.

The Morning Show is not based on any particular person’s life or news show but rather is inspired by both nonfiction literature and current events. First-season episodes of The Morning Show may be seen on Apple TV+ right now.

What is ‘The Morning Show’ About?

Jennifer Aniston, Reese Witherspoon, and Steve Carell appear in The Morning Show, an American drama streaming TV series that debuted on Apple TV+ on November 1, 2019. This show was conceived after reading Brian Stelter’s Top of the Morning: Inside the Cutthroat World of Morning TV (2013).

The episode delves into the personalities and atmosphere of a morning news programme on a major network. The male co-anchor gets removed from the programme following sexual misconduct claims. As additional details of sexual misbehaviour come to light, various aspects of the #MeToo movement are analysed from various vantage points.