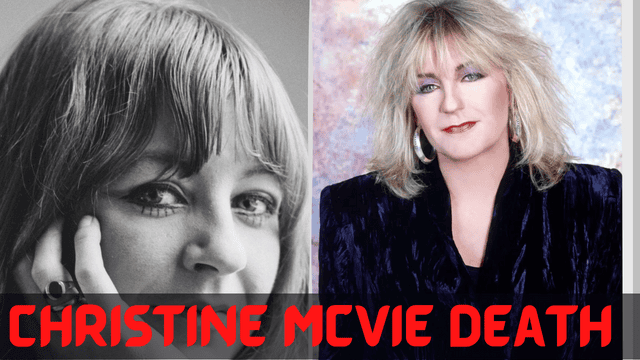 Christine Mcvie, a Singer for Fleetwood Mac, Passed Away at Age 79!

Christine Anne McVie was a singer and musician from England. She gained most of her notoriety as a singer and keyboardist for the band Fleetwood Mac, which she joined in 1970. Additionally, she issued three solo albums. Her lyrics primarily dealt with love and relationships.

She was “the driving force behind some of Fleetwood Mac’s biggest hits,” according to Steve Leggett of AllMusic, who called her an “unabashedly easy-on-the-ears singer/songwriter.” On Fleetwood Mac’s 1988 Greatest Hits album, she wrote or co-wrote eight songs, including “Don’t Stop,” “Everywhere,” and “Little Lies.”

As a member of Fleetwood Mac, McVie was honored with the Brit Award for Outstanding Contribution to Music and inducted into the Rock and Roll Hall of Fame in 1998. She made the decision to leave the band that same year after nearly 30 years with them and lived in semi-retirement for almost 15 years.

2004 saw the debut of her solo album. Before reuniting with the group in 2014 ahead of their On with the Show tour, she performed on stage with Fleetwood Mac in September 2013 at London’s O2 Arena.

“On behalf of Christine McVie’s family, it is with a heavy heart that we inform you of Christine’s death,” a statement on Instagram said.

“She died peacefully in hospital this morning, Wednesday, November 30th, 2022, after a brief illness.” She was accompanied by her family. We respectfully request that you respect the family’s privacy during this extremely difficult time, and we would like everyone to remember Christine’s life as an incredible human being and revered musician who was loved universally. Christine McVie, rest in peace.”

The British American rock band, founded in London in 1967, has sold over 100 million records worldwide, making them one of the most successful groups of all time. Dreams, Go Your Own Way, and Everywhere is among their most well-known songs.

Following the news of McVie’s death on Wednesday night, the band issued a statement in her honor. “There are no words to express how deeply we mourn Christine McVie’s death.” She was truly unique, special, and gifted beyond measure.”

BREAKING: Fleetwood Mac announces the death of member Christine McVie at the age of 79. https://t.co/79x36mjciy pic.twitter.com/wcF03aVx0l

McVie was born on July 12, 1943, in the Lake District of Bouth, Lancashire, England. Cyril, her father, was a concert violinist and professor of music at St. Peter’s College of Education. He also tutored violin students. Beatrice, her mother, was a psychic and faith healer.

McVie grew up with her older brother, John, near Birmingham. Though she began playing the piano at the age of four, she did not begin seriously studying music until she was eleven. After studying classical music for several years, she switched to rock and roll at the age of 15.

McVie had intended to become an art teacher at first. For five years, she studied sculpture at a Birmingham art college. During this time, she met several musicians from the local scene and was invited to join a band called Sounds Of Blue.

The band disbanded before McVie finished her studies, at which point she decided to relocate to London because she was having difficulty launching her art career. She formed the band Chicken Shack with former Sounds Of Blue bandmates and recorded two albums with them.

A career with Fleetwood Mac

McVie was a fan of Fleetwood Mac during his time with Chicken Shack, as both bands frequently toured together and were signed to the same record label. She eventually became a permanent member of Fleetwood Mac after marrying bassist John McVie in 1970.

Although she was not a founding member of the band, she became an indispensable member after Peter Green’s departure. McVie was a huge fan of his and knew all of the song lyrics, so she was able to help fill the void left by his absence. Future Games was her debut studio album with the band.

The early 1970s were a difficult period for Fleetwood Mac, as musicians joined and left the band almost constantly. Fleetwood Mac decided to relocate from England to the United States in 1974. McVie consented, albeit reluctantly. Stevie Nicks and Lindsey Buckingham joined the band within a year of the relocation. “Over My Head” and “Say You Love Me” were two of the album’s many hit songs.

In 1976, McVie began a relationship with the lighting director of the band. This relationship inspired the top-ten hit “You Make Loving Fun” from the album Rumours. The album “Rumours” was incredibly popular and became one of the best-selling albums ever. The album’s biggest hits for McVie were “Don’t Stop” and “Songbird.”