Jupiter’s Legacy is the most recent superhero series to debut on Netflix. The series contains a total of eight episodes and tells the tale of the Image comic series by Mark Millar and Frank Quitely. The protagonists and villains in the storyline have been clearly defined in the episodes since the beginning. However, the series’ conclusion had a big storyline surprise that may have left many viewers perplexed as to its significance.

The six founding members of the Union of Justice, an elite squad of superheroes, and their descendants were the center of Jupiter’s Legacy, which went back and forth between 1929 and the early 1930s to the current day. The story mostly centers on the fight between the superheroes and Sheldon Sampson (aka, The Utopian), the Union’s utopian leader, and his stringent moral code.

The superhero series concluded on a big suspense, revealing Sheldon’s brother, Walter (aka, Brainwave), as the brains behind the villain Blackstar’s escape and construction of his replica. With Skyfox still missing and tensions rising within the Union, Jupiter’s Legacy left many unanswered questions, many of which may be answered using the show’s source material.

The saga of Sheldon Sampson, a.k.a. the Utopian, the most powerful superhero commanding his family and the Union of heroes, has been the subject of the previous episodes. The last episode opens with Blackstar escaping, while Walter, Sheldon’s elder brother, battles to regain consciousness after encountering Skyfox in his head. The storyline keeps on track for the first half of the episode, showing Skyfox as the major villain who is stopped by Sheldon and the Union. However, as the episode comes to a close, one of the characters’ hidden ulterior goal is exposed.

Sheldon, who is attempting to catch Blackstar with his son Brandon, is torn between saving his kid by murdering Blackstar and breaking the code and killing Blackstar and breaking the code. Sheldon and Brandon’s relationship suffers as a result of his hesitancy. Raikou, Walter’s estranged daughter, on the other side, enlists the aid of Grace to bring Walter back. She does, however, deduce her father’s true intentions. It is then revealed that Walter has been plotting against his brother by portraying him as a weak leader and isolating him from his son in order to usurp Sheldon’s leadership role.

After she tries to extort money from him, Walter murders his own daughter to keep her from disclosing the truth. Walter is shown to be the true traitor to his family and the union, with the goal of becoming the leader himself. Because the program finishes on a cliffhanger, it’s probable that it’ll be renewed for a second season to continue the plot.

Jupiter’s Legacy: How Did the Superheroes Get Their Powers?

The founding members of the Union of Justice travelled to a desolate island in the past, where old and strange aliens conferred their powers on them. For a long time, it appeared that they were the only ones with superpowers, however there are now numerous more superheroes. All of them appear to be in the same age bracket as Chloe and Brandon, with many of them already being members of the Union or attempting to join the elite squad.

The topic of how they acquired their abilities is never addressed in Jupiter’s Legacy. The only thing that is certain is that they did not obtain them on the island. It’s conceivable that the next generation of superheroes are offspring of the captain and his crew who were hit by alien energy, but fans will never know for sure now that the program has been cancelled, and the comics don’t really give much of an answer either.

Read More: Fear The Walking Dead Season 7: How Far We Know About It

Jupiter’s Legacy: What Happened in the Intervening Decades?

Throughout Season 1, Jupiter’s Legacy bounces from the 1930s to the present day, with several arguments regarding sustaining the older generation’s ideas — particularly, Sheldon’s goals and the Union’s moral code — versus the current generation’s worldview. Things have certainly changed, but the series does not go into detail about what may have occurred in the decades leading up to today’s conflicts. Surprisingly, it’s during the Union’s 90-year existence that the solutions to today’s disputes may be found, including what happened to George and how the new superheroes obtained their powers, among other things.

The comics divert the attention to the 1960s, revealing what the Union superheroes were up to after organizing themselves, as well as how they dealt with the public.  As a result of rescues, how the government perceived them, and how Walter and George wished to participate in society dialogue. The comics’ concentration on the years after the Union gained control contains significantly more of Richard, Fitz, and George’s backstories than the series does.

Brainwave was the brains behind Blackstar’s clone, framing Skyfox, and driving a rift between Sheldon and Brandon, as revealed at the end of Season 1 of Jupiter’s Legacy. Season 2 would very certainly have gone into further detail about what his true endgame objectives were.

According to the comics, Brainwave wanted The Utopian out of the way because he believed his brother’s rigid moral code — which included no murdering and no involvement in political or military activities — was preventing the Union from progressing. Walter thought that possessing superpowers meant they had a responsibility to society that extended beyond rescuing people from little mishaps on a regular basis.

Brainwave sought to give political leaders guidance and have superheroes ascend to positions of power, which included a proposal for the Union to become an official government division. In the comics, Walter’s animosity and betrayal of the Union is more obvious, and he persuades Brandon to turn on his parents as well, murdering both of them before fully aligning himself with his uncle.

Walter’s schemes finally result in an uncontrollable evil dictatorship ruled by him, with Brandon attacking a country simply because he can. The series appeared to be building up to all of this, but it was still in its early stages, with Walter being exposed as the main villain late in season 1.

Get the most up-to-date entertainment news from India and the rest of the globe. Now you can keep up with your favorite TV stars and show news. The Shahab is your one-stop destination for trending Bollywood news. Tune in today to stay updated with all the latest news and headlines from the world of entertainment. 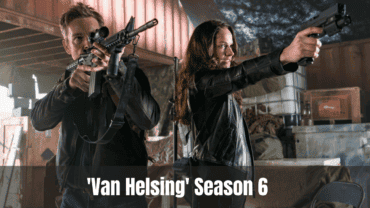