HomeEntertainmentHow to Watch Into the Wild with Bear Grylls and Ajay Devgn...
Entertainment

You’ve probably seen the Discovery Channel show “Man vs. Wild,” in which the well-known “Bear Grylls” takes a chance and teaches us how to survive in the most dangerous conditions.

Famous Indian Bollywood actor “Ajay Devgn” is seen exploring the jungle and testing his survival abilities with Bear Grylls in the forthcoming episode of “Into The Wild With Bear Grylls.” Ajay shot the episode in the Maldives, and the breathtaking beauty of the place is not to be missed.

Into the Wild with Bear Grylls and Ajay Devgn Premiere Date

It premiered on the Discovery Plus channel yesterday, October 22nd. Vicky Kaushal will be seen in the Maldives with Bear Grylls after Ajay. I hope you’re all looking forward to seeing Vicky Kaushal.

What is the duration of the episode?

The program lasted 50 minutes and was not at all tedious. Nothing, on the other hand, is ever dull with Bear Grylls. It’s also fascinating to see performers do genuine stunts.

How to Watch “Into the Wild with Bear Grylls” Online? 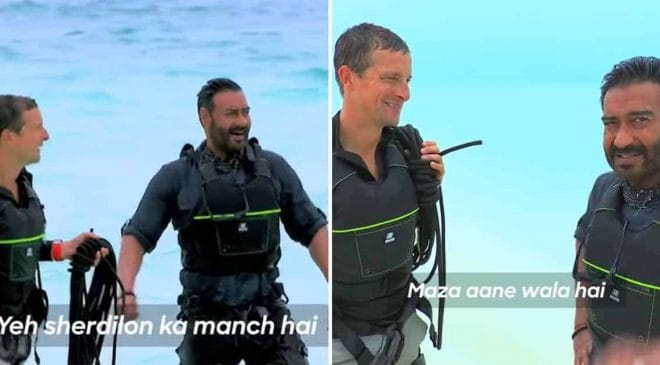 It is suitable for individuals who have already watched Discovery+ on the internet. It premiered at 6 a.m. on Friday, October 22. Those who can’t wait to see it on TV will be able to do so on October 25th at 8 p.m., which is tomorrow. Are you looking forward to seeing this incredible episode?

For individuals who do not have discovery+, there are alternative options. I’m only going to list it here. You are free to watch it any way you like.

Hulu and Amazon have all of the episodes available for anybody who missed the fantastic show.
Hulu contains all three seasons as well as the current new season, and new episodes are released every 24 hours. All three episodes, as well as the entire season, are available on Amazon Prime, however, it is not free. You must pay money or sign up for subscriptions.

If you want to see it for free, you must do so on television. That is all there is to it. It is not legal to view it. It’s entirely up to you if you prefer the unlawful route.

I’m hoping you’ve seen the trailer. If you haven’t seen it yet, I’ve embedded it below.

Ajay is waiting for the boat in the ocean on the trailer when Bear arrives in his helicopter and dives into the sea as usual. Then the experience of a lifetime begins. They come across sharks in the middle of the ocean, among other things.

I’m not going to say anything else because I don’t want to ruin your surprise. But, sure, this is going to be amazing, exciting, daring, and difficult. In the teaser, we hear Bear in English and Ajay Devgn in Hindi, which is an excellent pairing.

Are you prepared to take on the wild alongside Bear and Ajay? You’ll have to wait till the next day. Set a reminder for tomorrow’s program on Discovery Channel at 8 p.m.

ruchika
Thank you for visiting my profile. I am a bibliophile who enjoys writing. I am pursuing a bachelor's degree in biotechnology and am currently residing in Pune.
RELATED ARTICLES
Entertainment

Goliath Season 3: Creator | Cast | Plot | Ending Everything We Know About It