AIUDF leader while replying to BJP leader Meenakshi Lekhi said, “The books referred by you are not the right books. I will sit with you and refer the correct books. You have mentioned Salafi sect, this ideology has been held responsible for promoting terrorism. We don’t follow this sect. I would like to ask the law minister whether the provision to send Muslims husbands to jail, will it increase the harmony in the family?”

BJP MP Meenakshi Lekhi during her speech questioned, “Would like to ask those opposing the Triple Talaq Bill here that in which Surah (Chapter) of the holy Quran is talaq-e-biddat mentioned? This is not ‘he vs she’, these are issues of human rights violation.”

“Talaq Biddat is practiced among Hanafi sect followers which constitute 70% Indian Muslims whereas Salafi sect which is considered to be pure form of Islam completely rejects the Talaq Biddat”, added Lekhi. 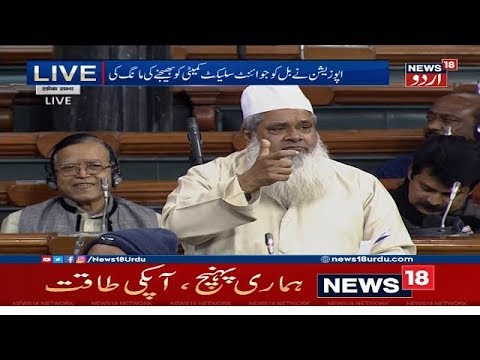 While opposing the Bill the AIMIM chief Asaduddin Owaisi said: “All the Muslim women are against this bill. It is violative of Article 14, 15, 24 and 26. Supreme Court has decriminalised the relations between two men and two women but you are criminalising a divorce law. Why there is a provision of imprisonment of only one year under the Hindu Marriage law for Hindu husbands then why there is provision for imprisonment for three years under Triple Talaq law.”

He further said: “The government’s intention is to send us jail. Your law is against plurality. You people have sheltered the former minister who was accused by several women for raping them under the ‘me too’ campaign. We oppose this bill.”