New Delhi: In the wake of increasing atrocities against Dalits and Muslims, All India Ulema Board (AIUB) and Mission Asha Gathbandhan (MAG) held a convention “Dalit and Muslim Sammelan” (Dalit Muslim Convention) on Tuesday at Gandhi Peace Foundation, New Delhi.

Maulana Syed Shahabuddin Salfi Firdausi in his keynote address said, “Today I came to your city to awake your nature and to end the distance between us, the colour of our blood is same so how does it matter if we are near or at distance physically, let’s embrace everybody without making distinction between a friend and enemy”.

“India is a land of non-violence and we have freedom of speech and practice, everyone should get equal rights. There is nothing which exist as Dalits and non-Dalits”. While quoting Swami Vivekanand Maulana Firdausi said, “When Swami Vivekanand visited America, he addressed people of America as Brothers and Sisters and today its very unfortunate that we are not ready to accept our fellow countrymen as our brother and sisters”. 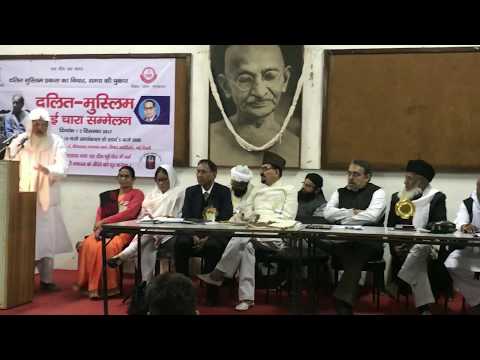 Dr. Mahesh Kumar in his presidential speech said, “At the time of Independence, representation of Muslims in government sector was 30% and now they stand at 1.5% only. Muslims too are oppressed like Dalits and its high time that they both should unite together against this oppression”.

General Secretary of AIUB Bunai Hasani coordinated the program. AUIB Supreme Body Chairman Maulana Naushad Siddiqui while emphasising more on the unity among both the communities supported Dr. Kumar’s view. Islam teaches the cooperation as well as our culture and humanity teaches the same, Siddiqui added.

Hasani informed TheShahab.com that today we had lunch together and in future we will try to take it to higher levels.

People from all sections and walk of life from different parts of the country like Bangalore, Kolkata, Mumbai, Bhopal, Patna, Lucknow etc. participated in the convention.

A memorandum demanding the status report over the actions taken against the mob lynching cases and strict implementation of minimum wages across all states and union territories as directed by Supreme Court has been submitted to the office of Chief Justice of India after the convention.