New Delhi: A multi-religious conference organised by the Jamiat Ulema-e-Hind (JUH) on Sunday at Indira Gandhi Indoor Stadium, which saw thousands of people came together to adopt a declaration that any kind of violence against the innocent is anti-Islamic, anti-India and anti-humanity.

The conference named “Aman and Ekta Sammelan” saw participation from top religious leaders of various faiths and sects besides several thousand Islamic clerics from across the country.

Maulana Arshad Madani said that communalism posed a greater threat to India than terrorism in the present scenario. “Rising communalism is set to destroy the country. But, we will not allow this to happen”, he added. 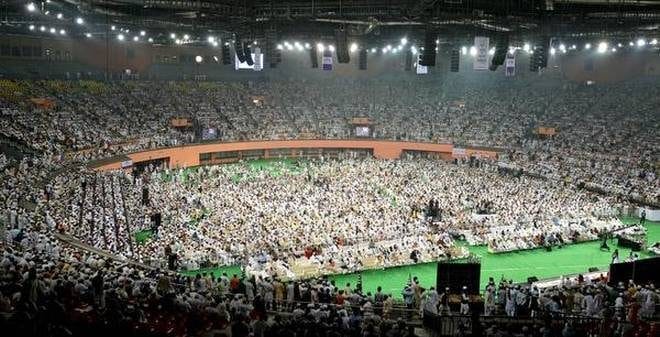 JUH General Secretary Maulana Mahmood Madani said the majority of Indians are peace loving and added that although people have differences with each other, they cannot be enemies. He hit out at Muslim leaders and clerics who make communal statements and said they were the “worst enemies of Indian Muslims”.

The chief guest at the conference, Swami Chidanand Saraswati of Parmarth Niketan Ashram, Rishikesh said that the conference was being organised to “bridge the gulf and erase differences” between people, and called for people to unite to alleviate poverty in India.

The declaration adopted at the conference said: “at this crucial juncture in the history of the nation, no longer shall words and acts of hatred and division be tolerated. We pledge to unify across all sects, faiths, castes and creed to lend our hands and hearts to bring in a new era dedicated to greener and more harmonious future that is more inclusive, none is excluded and fellowship reigns true.”